Plain and simple — Philomath High had a pretty rough first half on Friday night at Amity.

In the first quarter, for example, the Warriors managed just 3 yards of total offense to go along with 50 yards in penalties and a missed opportunity on the team’s first drive set the unfortunate tone. After recovering a fumble and setting up shop at the Amity 30, the Warriors lost yardage and ended up punting instead of turning the takeaway into early points.

Amity, meanwhile, came at the Warriors with a physical running attack and racked up 321 yards on the ground in what ended up as a 20-6 victory for the home team.

“I don’t know that we had a lot of mistakes in terms of fumbles and stuff like that but we had some untimely penalties,” PHS coach Alex Firth said. “We just couldn’t find a rhythm offensively. They were bringing a lot of pressure and we thought we had a pretty good game plan for it, but we didn’t establish an offensive rhythm so we didn’t really move the ball.”

“It’s their offense — they just grind at you,” Firth said. “We did a pretty good job but then we’d have something happen where we give up one play too many. They’re a good football team, you can’t take that away from them. They execute well offensively and defensively but we just made too many mistakes and never found an offensive rhythm.”

Amity (4-3 overall, 3-0 league) took the game-opening kickoff and on its first series, lost the ball on an errant pitch from the quarterback to a running back. PHS sophomore Preston Kramer was there to fall on the ball to give the Warriors good field position.

But on Philomath’s first series, the flags were flying with the Warriors unable to overcome 25 yards in penalties to pick up a first down. Amity started the next drive inside its own 20 but the home team put together an impressive drive to get on the scoreboard.

Amity’s 12-play, 87-yard drive ended with a 25-yard touchdown run down the left sideline by senior Wyatt Hatch. The team converted on a two-point conversion pass from Kane Black to Brant Bell and it was 8-0 with 2:05 left in the first quarter.

Philomath (5-2, 2-1) turned the ball over on its next possession with Amity’s Logan Grove coming away with an interception.

In the second quarter, Amity went up 14-0 with a six-play drive that covered 44 yards and was capped with an 11-yard TD run by Grove.

Philomath’s ensuing drive was a three-and-out although freshman Hudson Raab pinned Amity inside its own 20 with a 58-yard punt. The home team picked up a couple of first downs but the PHS defense came up with two sacks and an incompletion on fourth down to end the drive.

The Warriors followed with their best possession of the half by picking up their first two first downs of the game. Philomath converted on a third-and-7 on a Caleb Jensen pass to Ty May for nine yards to move the chains. But the offense sputtered with its next set of downs, which included an Amity sack that put the PHS offense into third-and-long.

The Warriors had some key players back in uniform for the game, including a couple of linemen and the starting quarterback. It had been close to a month for some of those players to be out of action.

“Obviously, they haven’t played in a few weeks and there was some rust — a lot of rust actually,” Firth said. “That may have contributed to it and it may have been part of the reason why we sputtered a little bit offensively. Frankly, we knew what we were going to get (from Amity); we just didn’t execute.”

Philomath did pick up the pace in the second half, however, and had a chance to get back into the game. After the Warriors went three-and-out to open the third quarter, senior Isaac Lattin had an effective punt inside the 20.

But Amity, starting the possession at its own 11, picked up where it had left off in the first half and found success running the ball. On the 11th play of the drive — all but one play had been a run — the home team fumbled the ball and Philomath recovered at its own 26.

The Warriors took over and this time put together a drive that led to points. Junior David Griffith started to find holes with runs of 17 and 14 yards to get the ball into Amity territory. After a false start penalty on third-and-1 appeared as though it might stall the drive, Jensen completed a pass to Kramer to get those five yards back and set up fourth-and-1. Griffith barreled forward for four yards to move the chains.

Philomath later converted on a third-and-3 with another Griffith run. The drive continued into the fourth quarter and Philomath faced a fourth-and-2. Jensen picked up the first down this time with a run for five yards.

The Warriors then got into a third-and-11 at the Amity 21 and needed a touchdown to entertain any thoughts of a comeback. Jensen picked up nine yards to bring up fourth-and-2 but another false start penalty backed up the Warriors five yards.

On fourth-and-7, Jensen went to the air and threw to Griffith out of the backfield down the left sideline. Griffith went up and made a one-handed catch for first-and-goal at the 2. On the next play, Griffith scored on a 2-yard run to cap a 19-play, 88-yard drive.

“David had an unbelievable catch on that fourth down toward the end zone,” Firth said. “We finally found something in the run game that started working for us and it started clicking.”

The extra-point kick failed but it was still a one-possession game with 9:05 remaining in the fourth quarter — still plenty of time to make something happen. But it wasn’t in the cards for Philomath with Amity responding with a touchdown drive that took a lot of time off the clock. 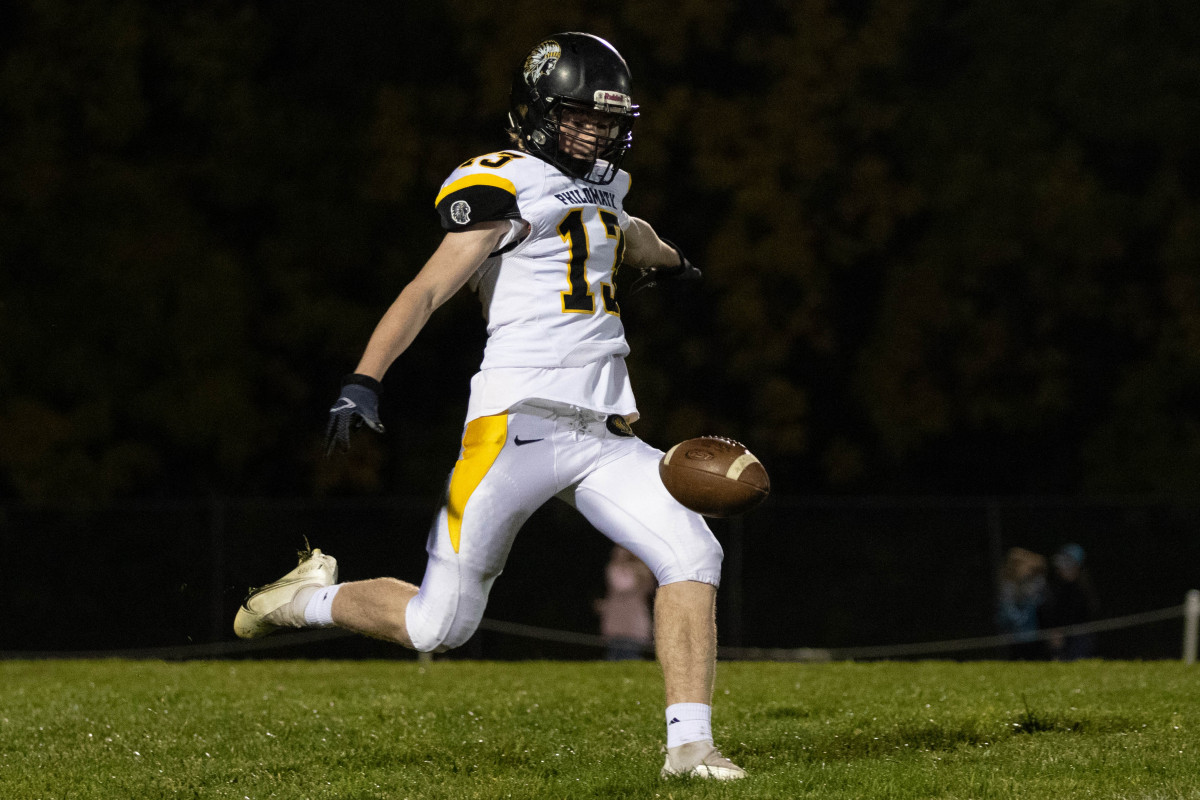 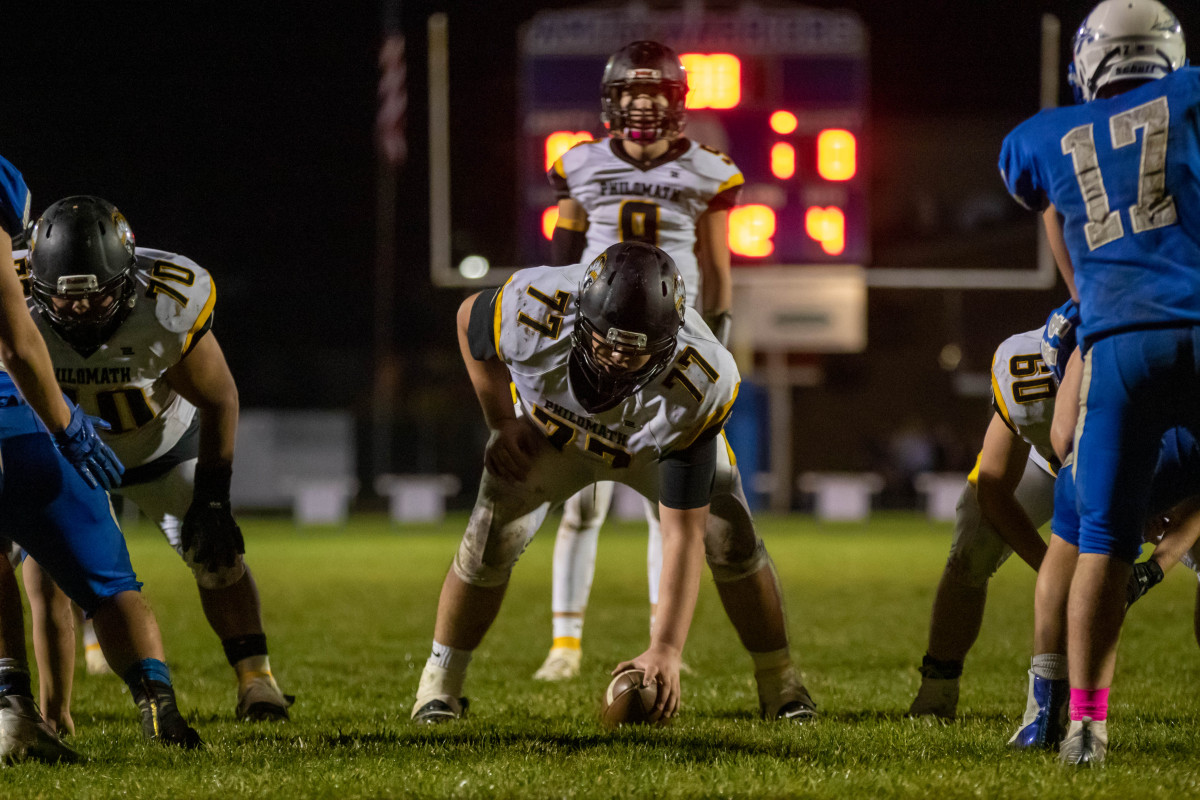 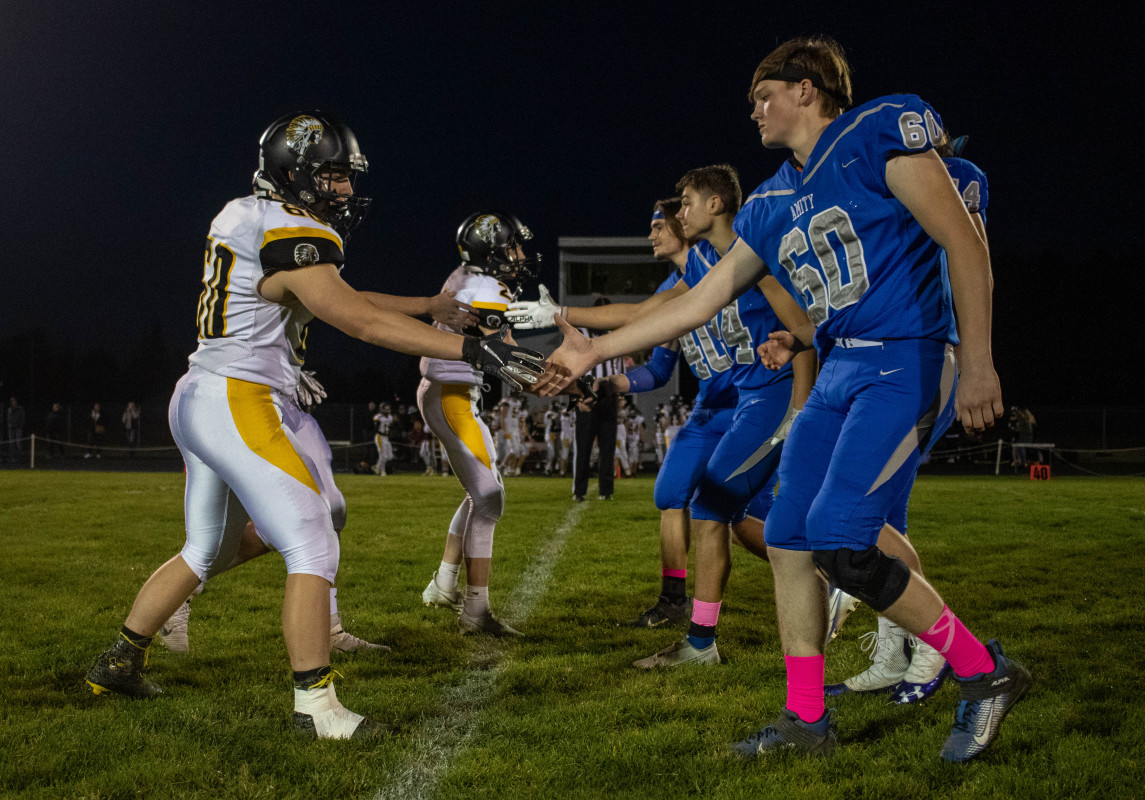 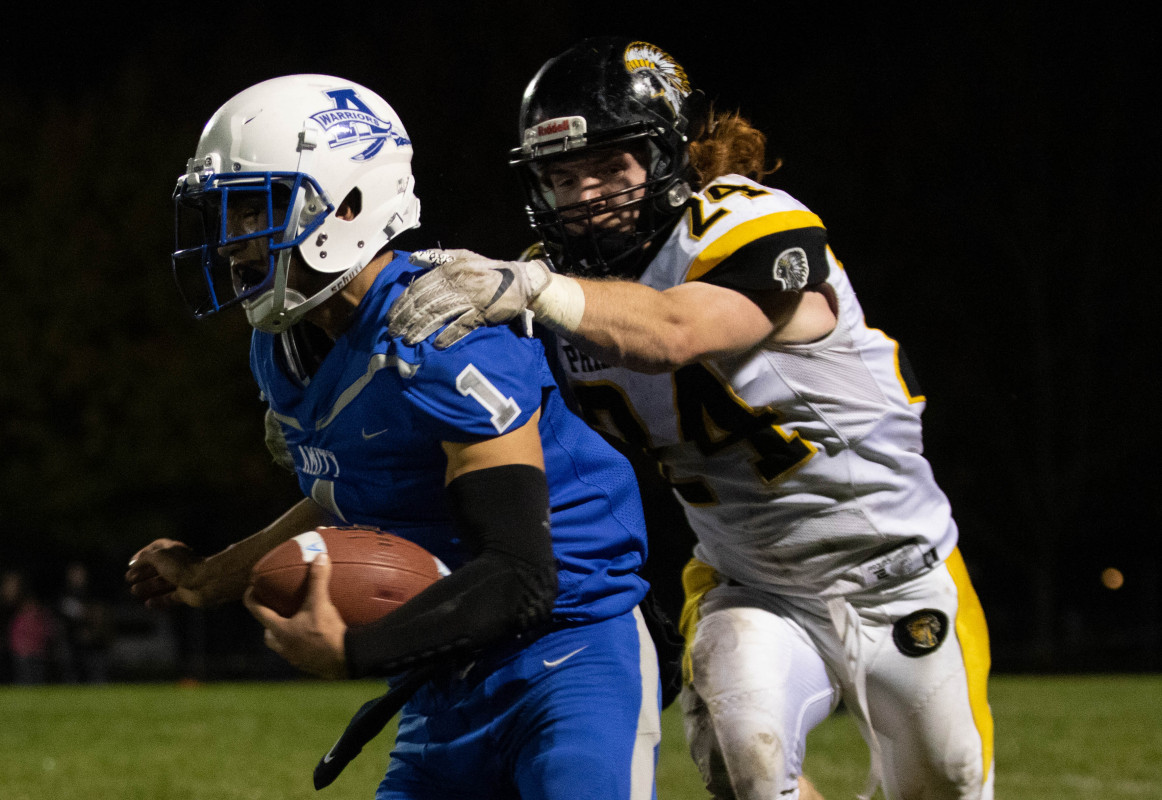 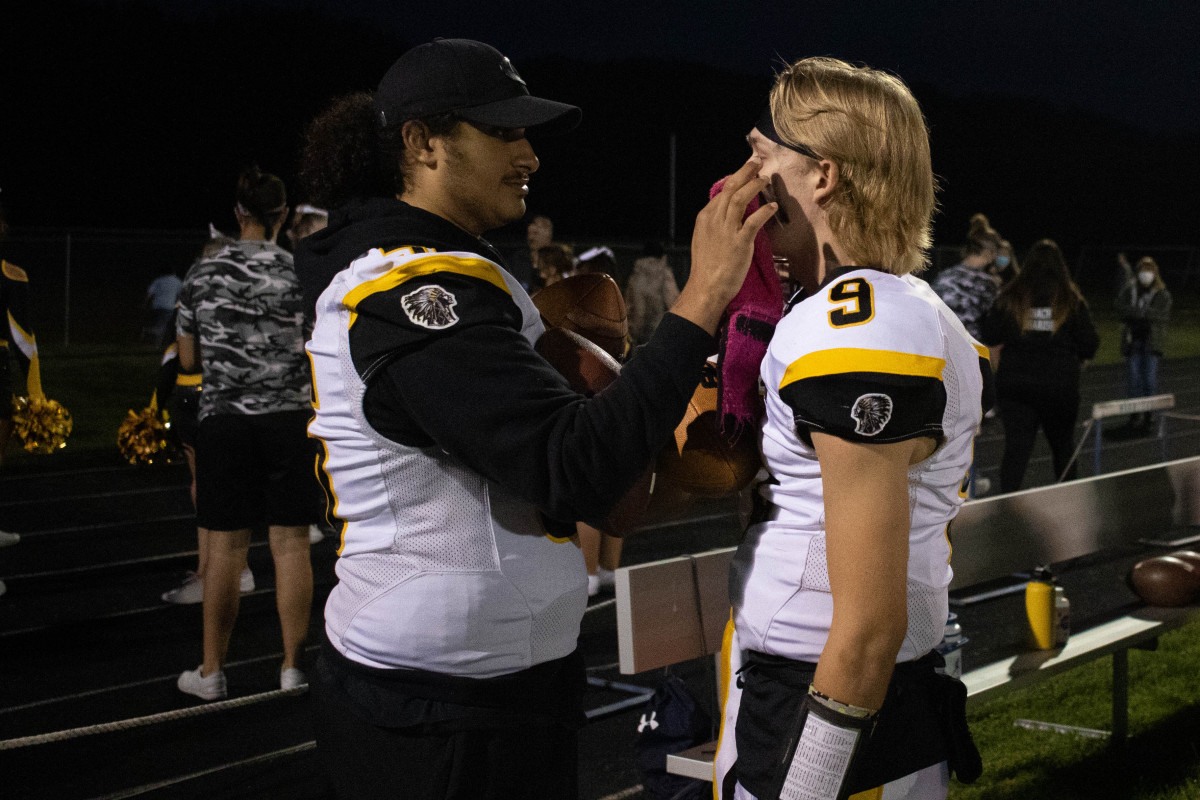 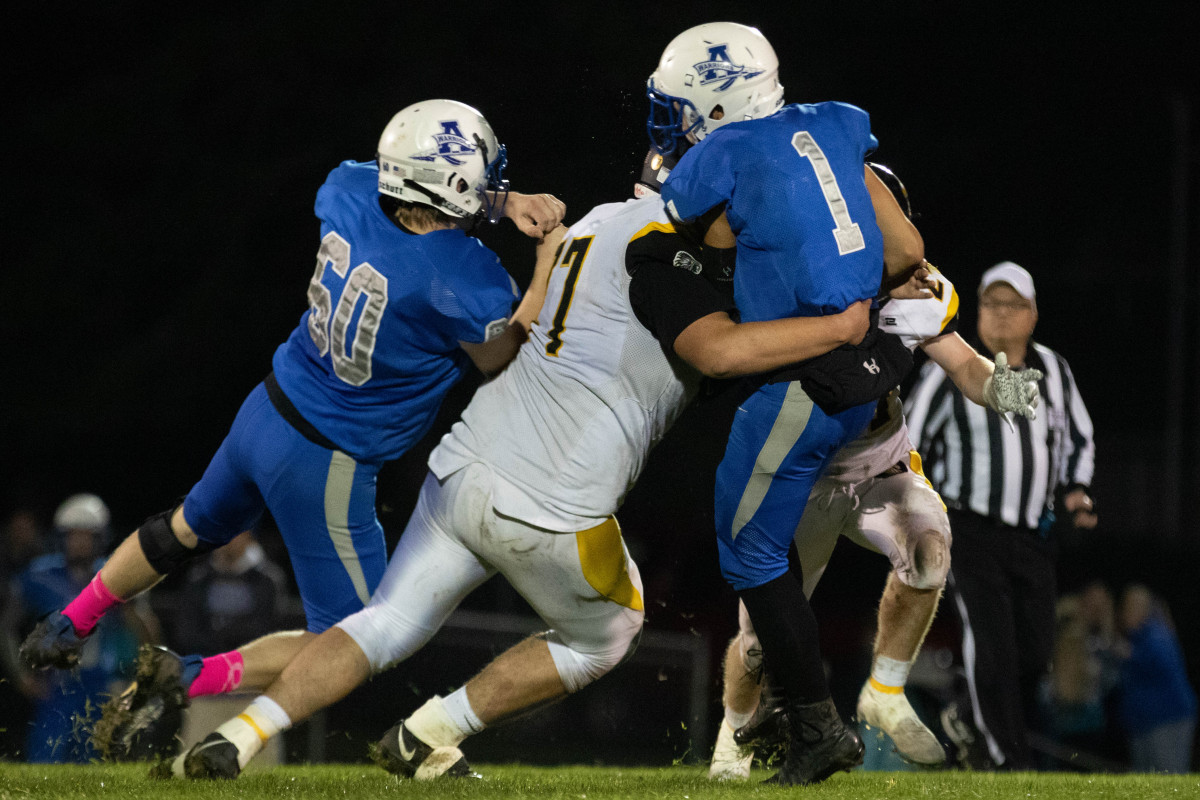 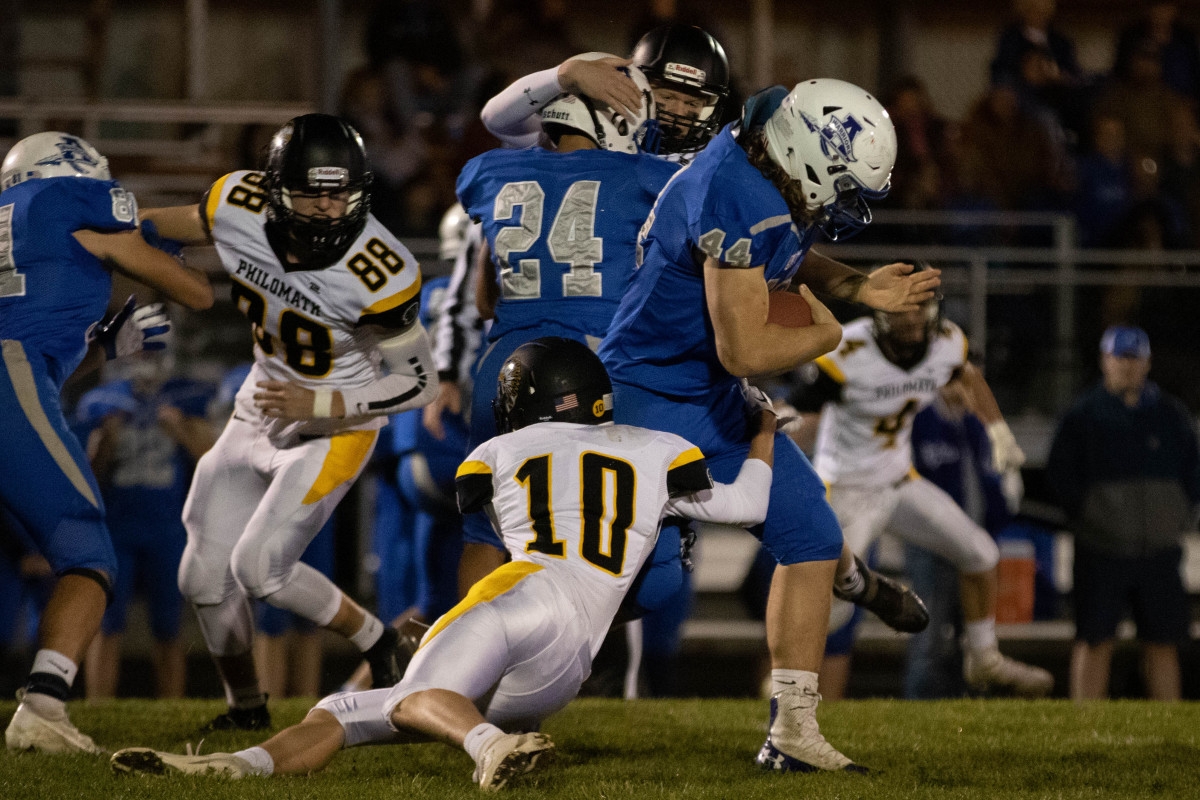 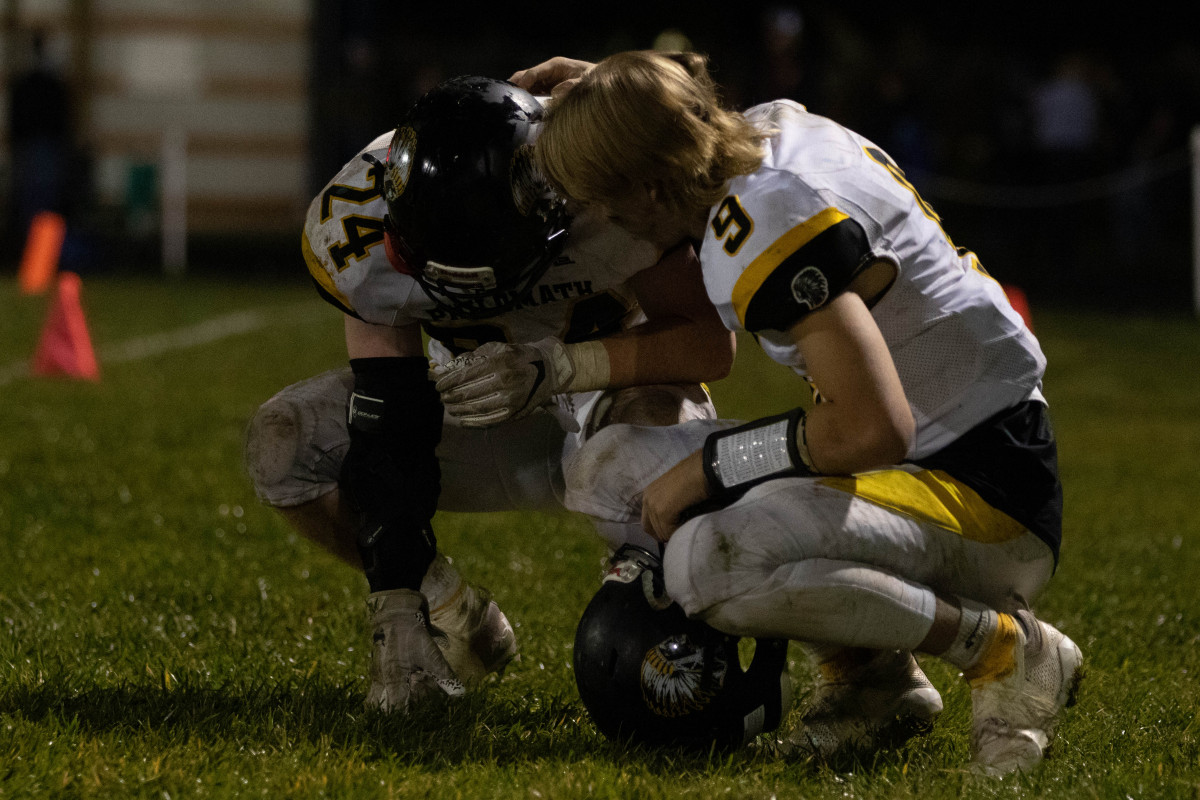 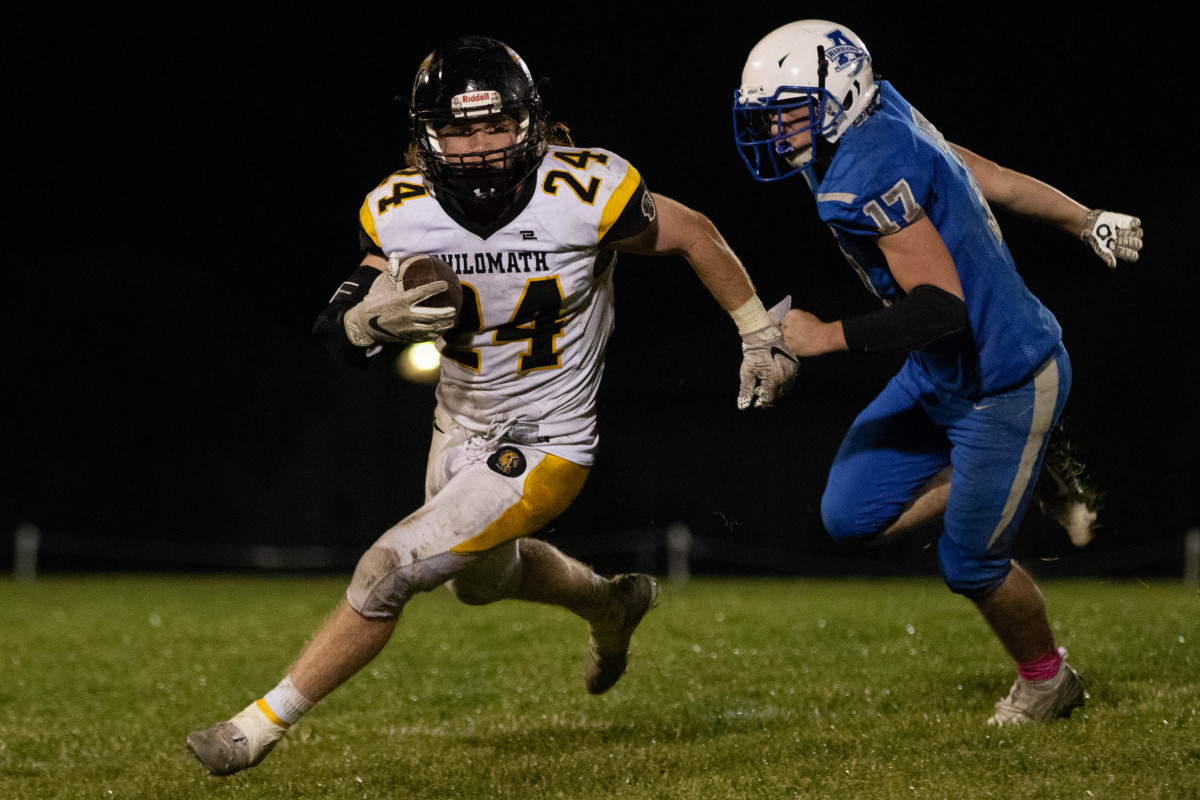 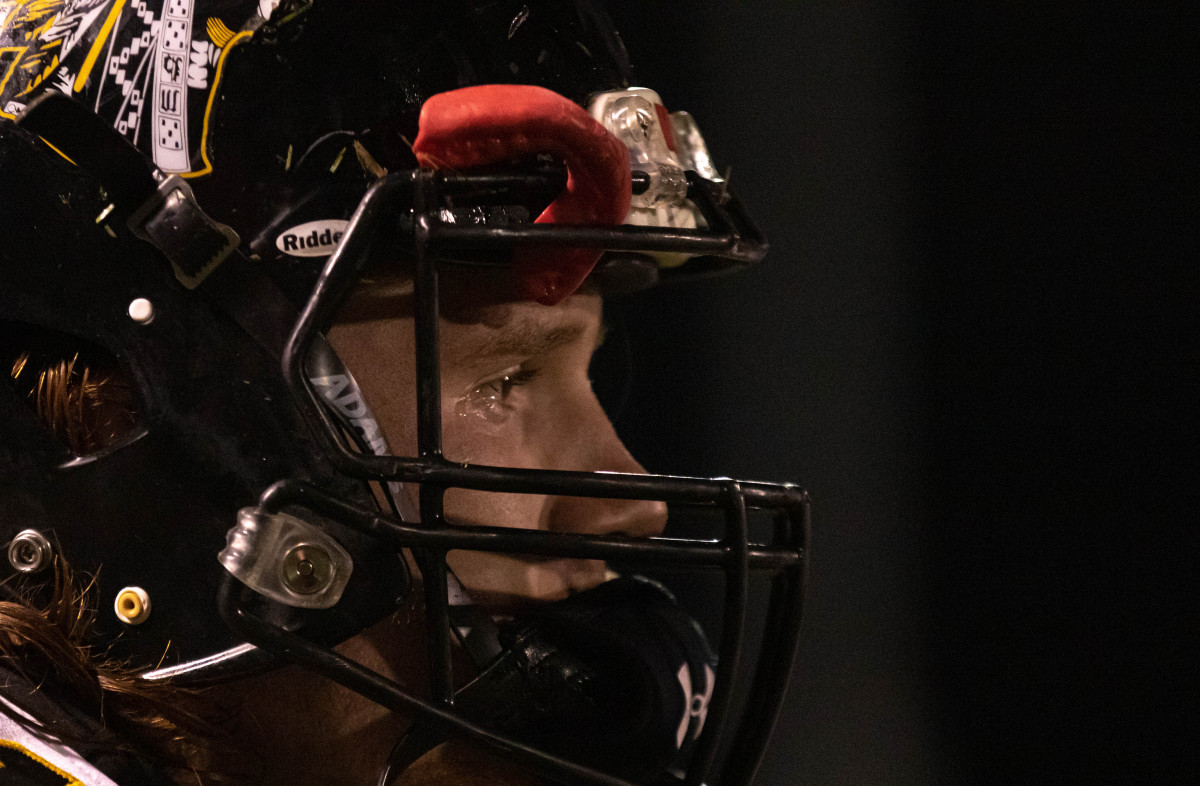 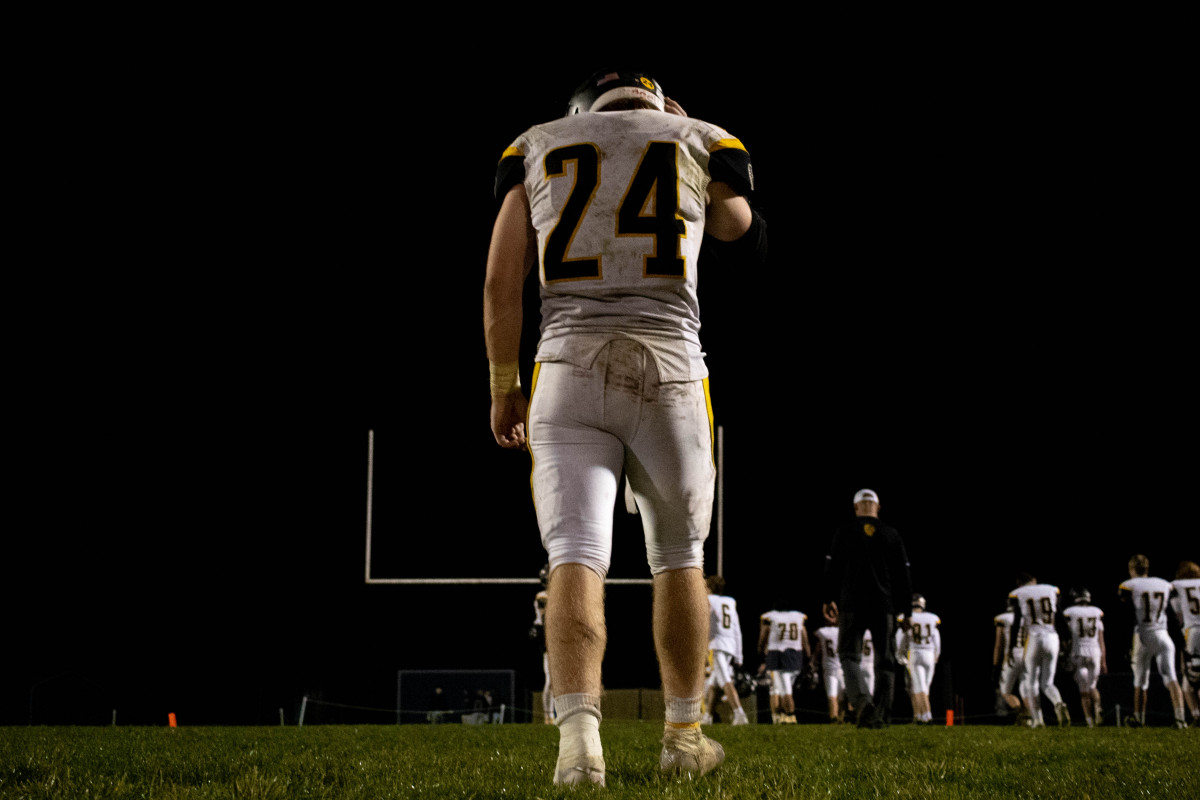 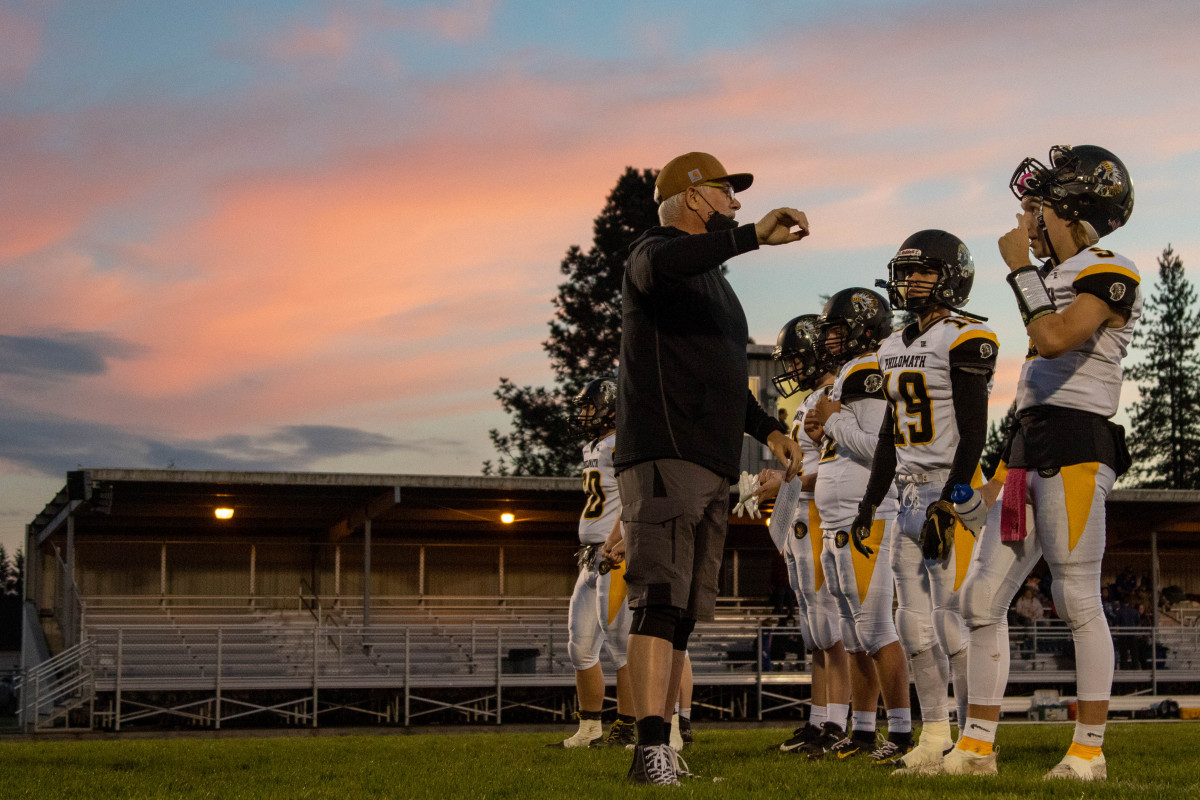 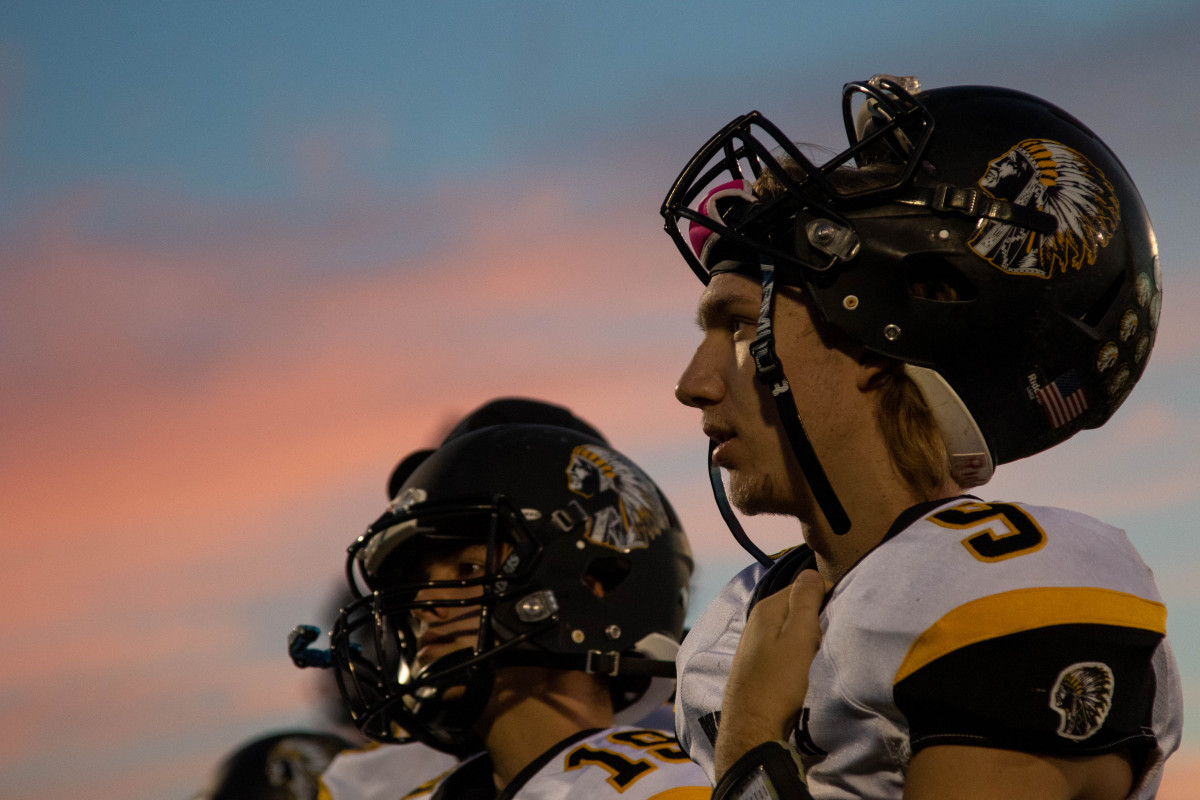 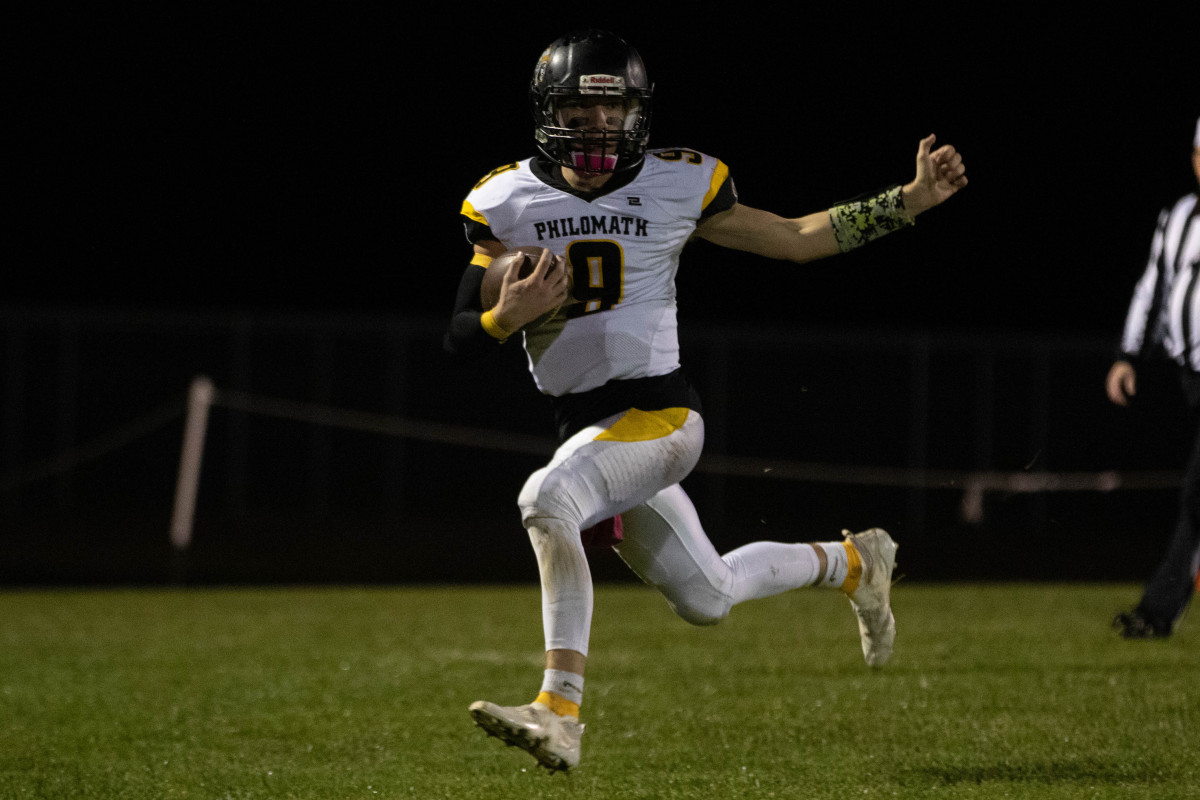 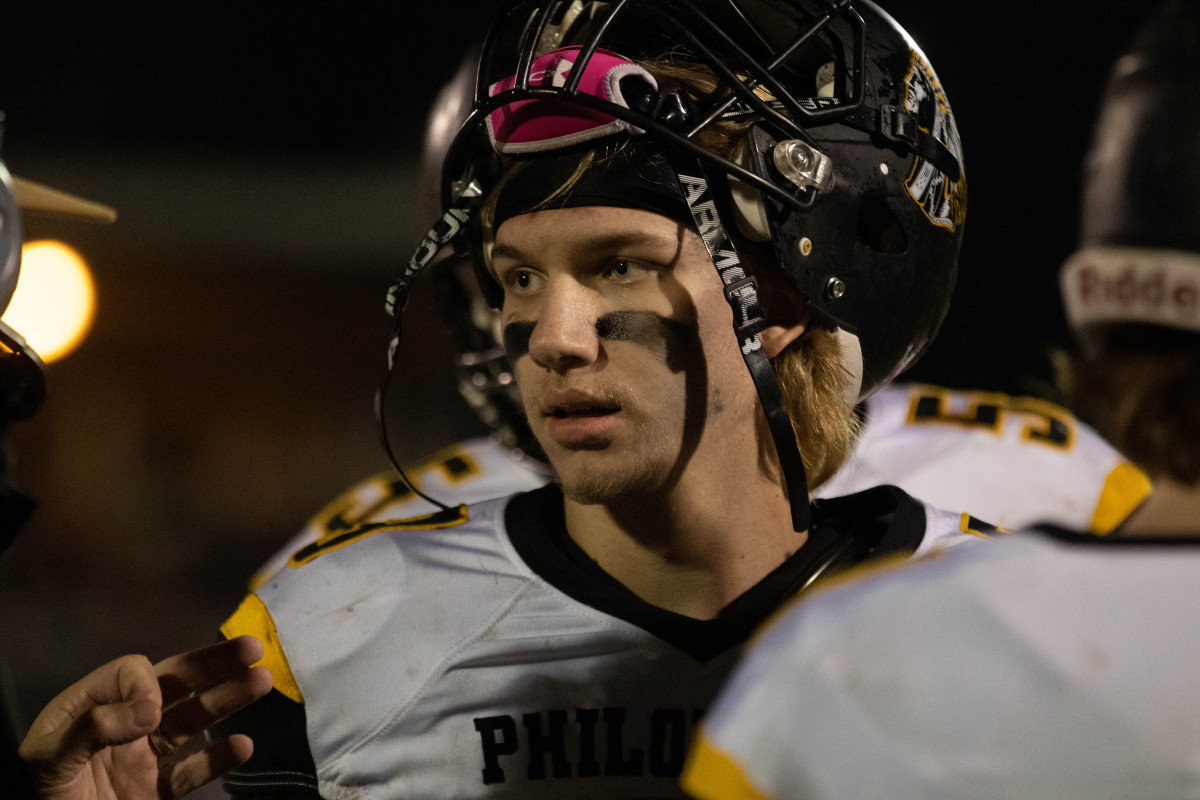 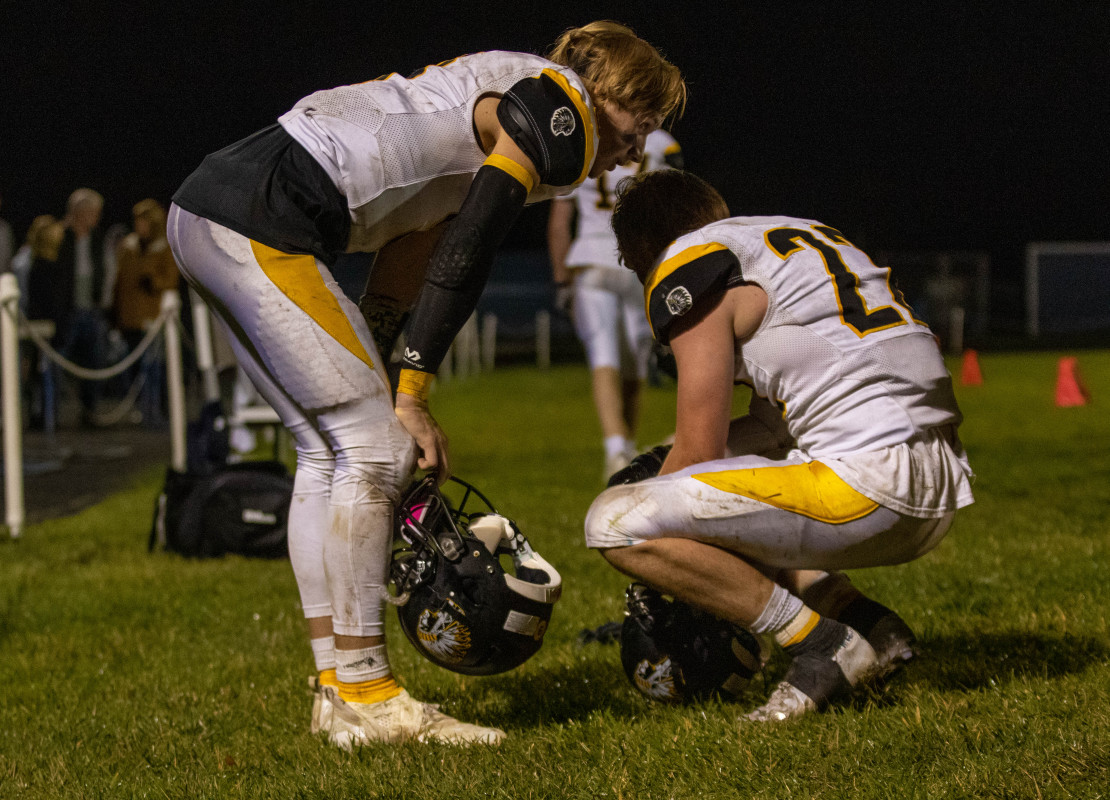 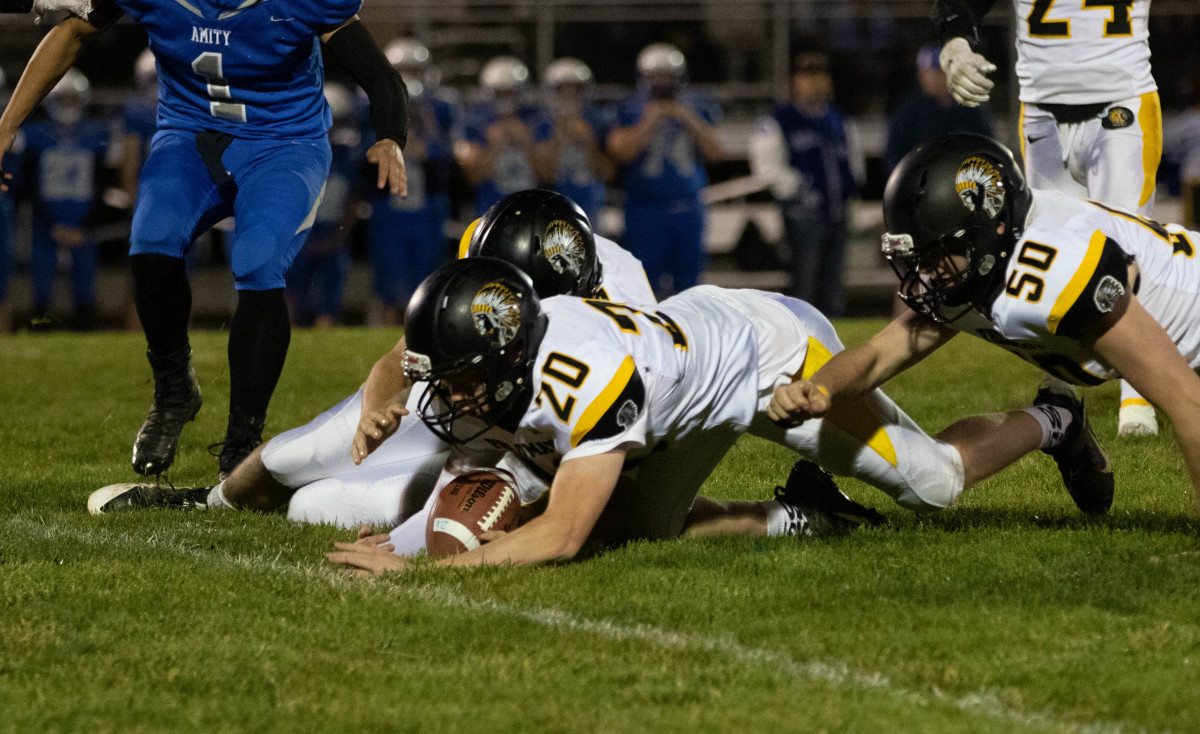 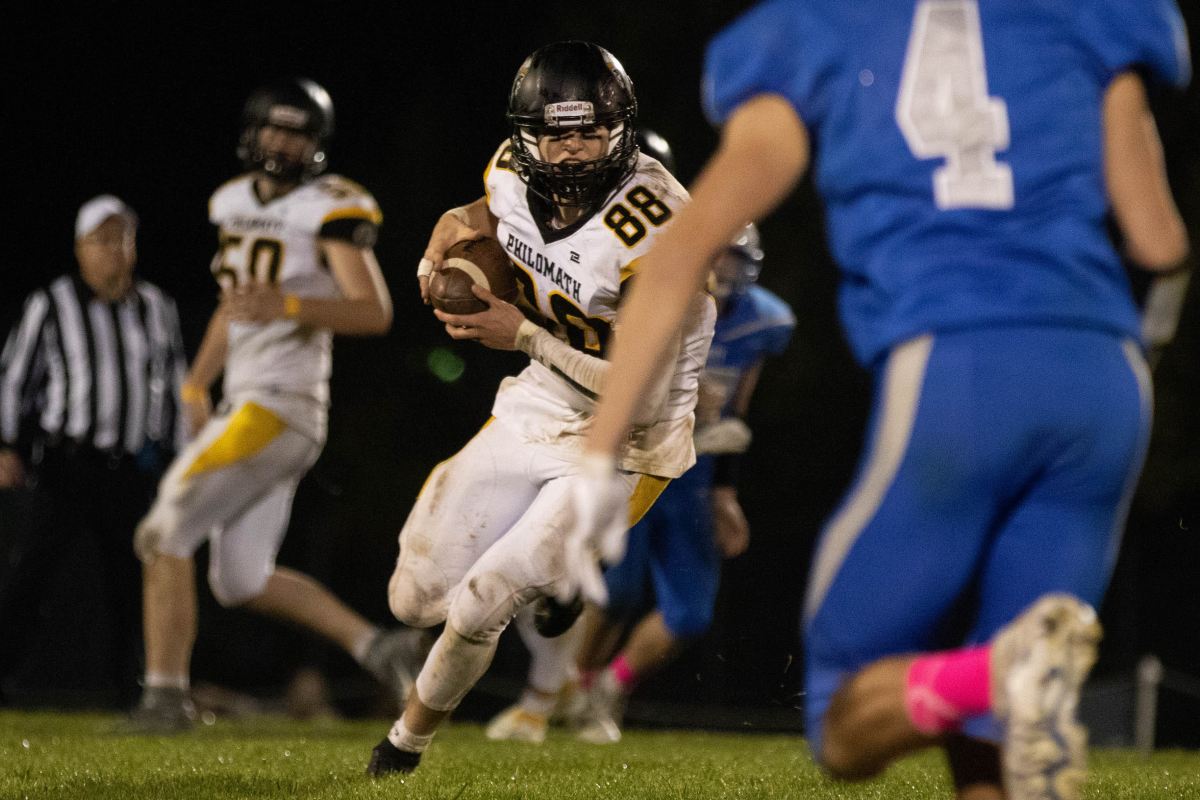 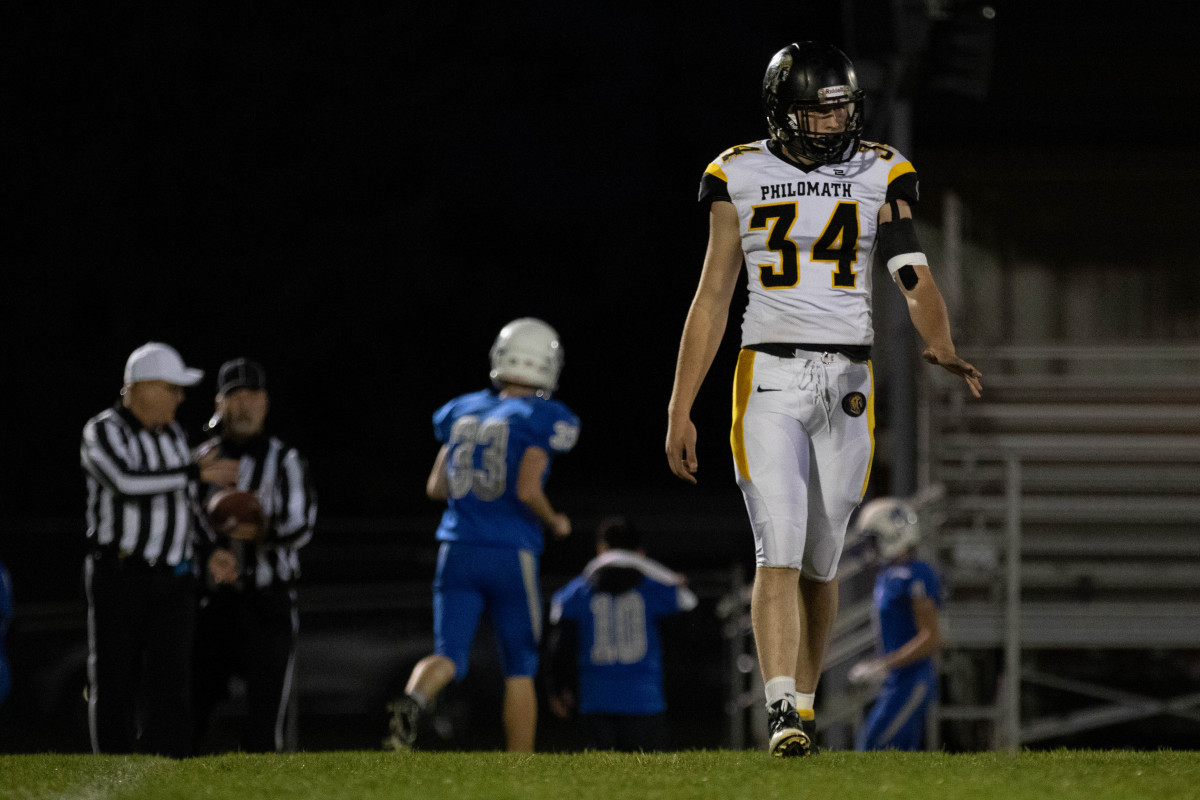 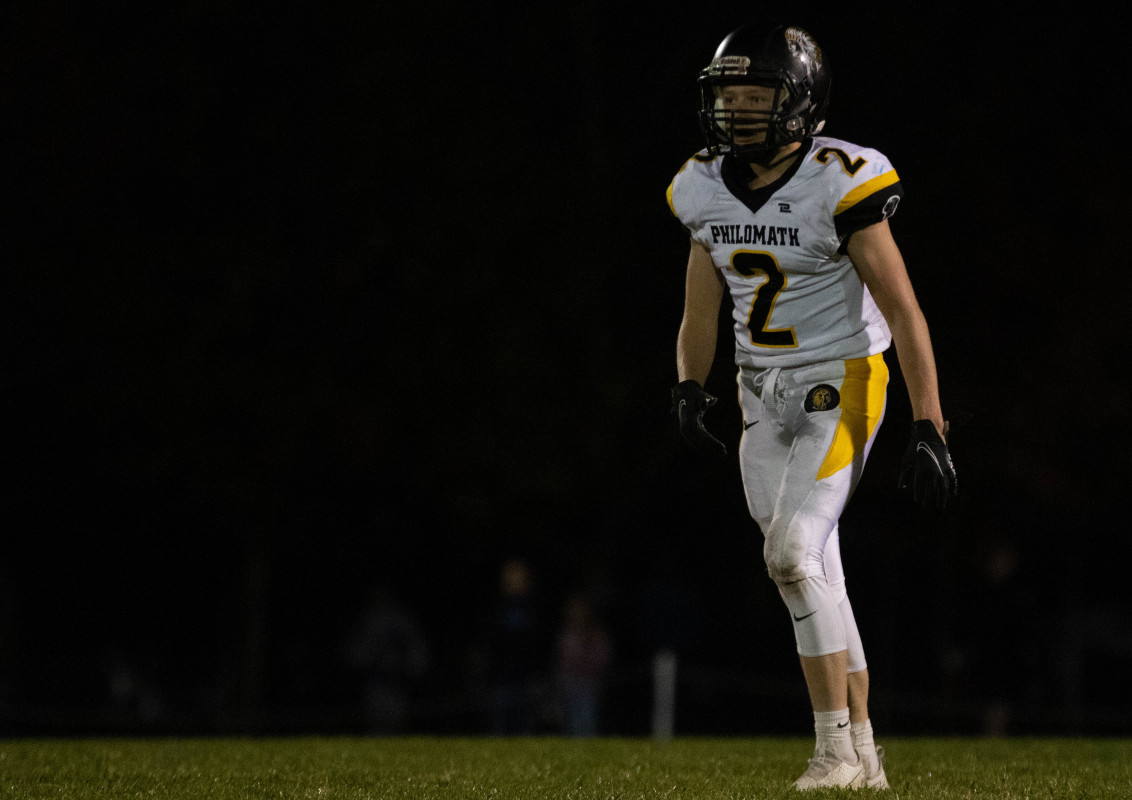 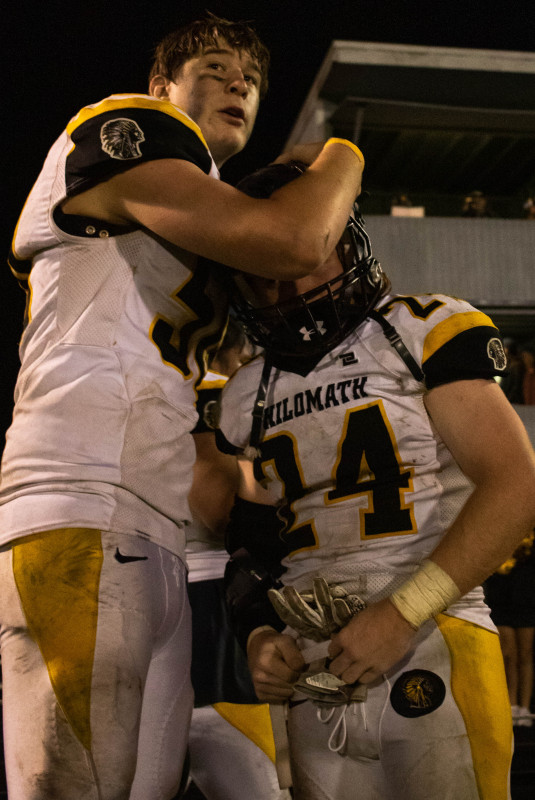 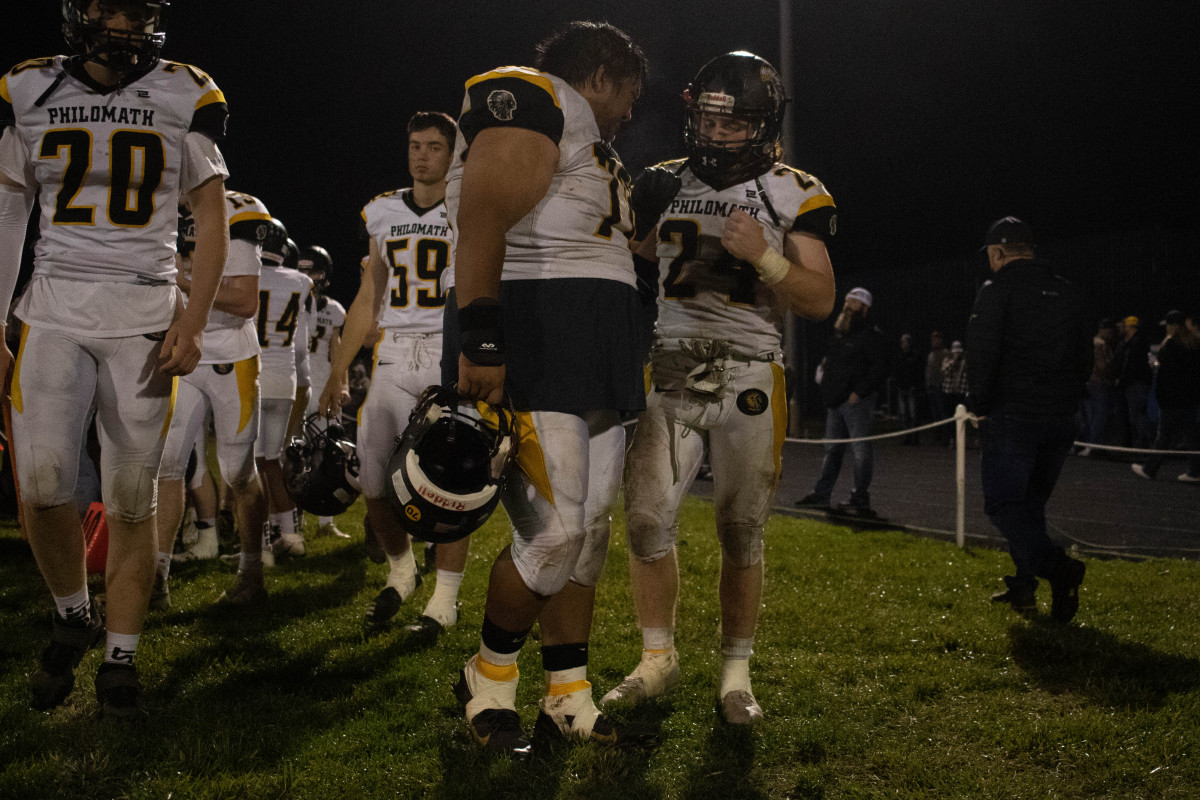 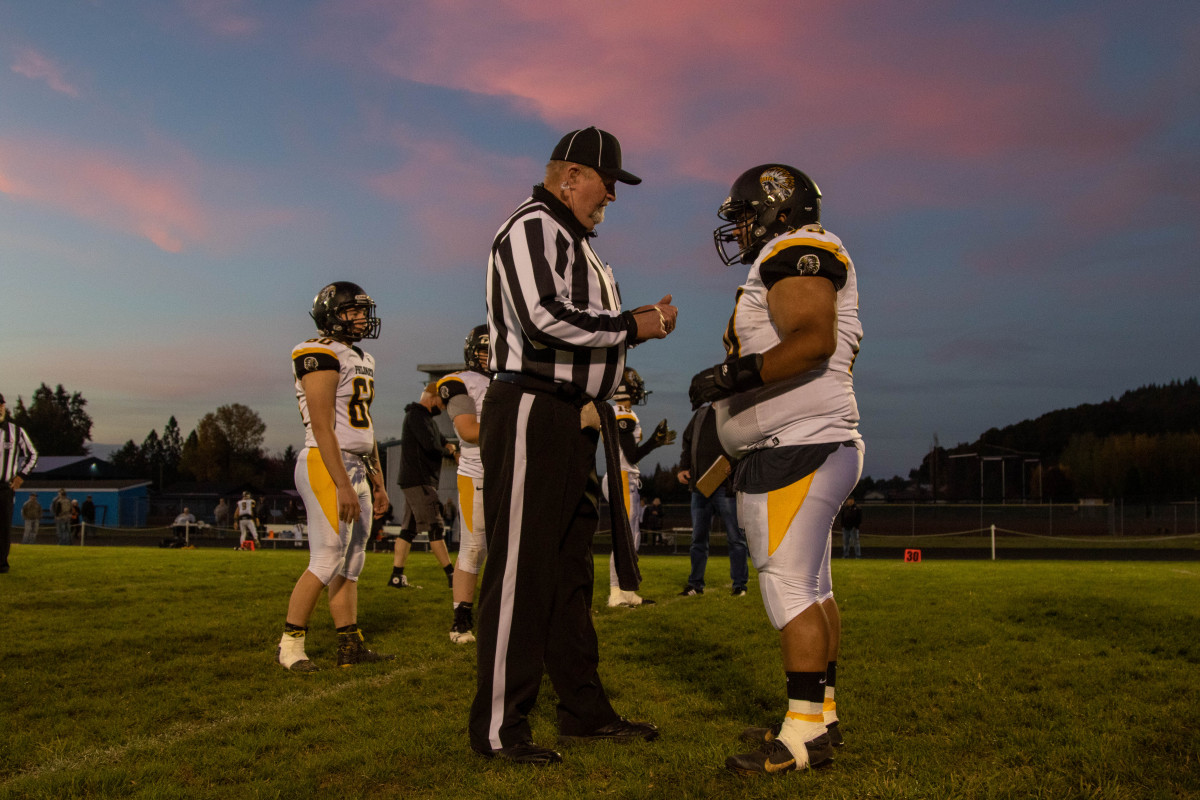 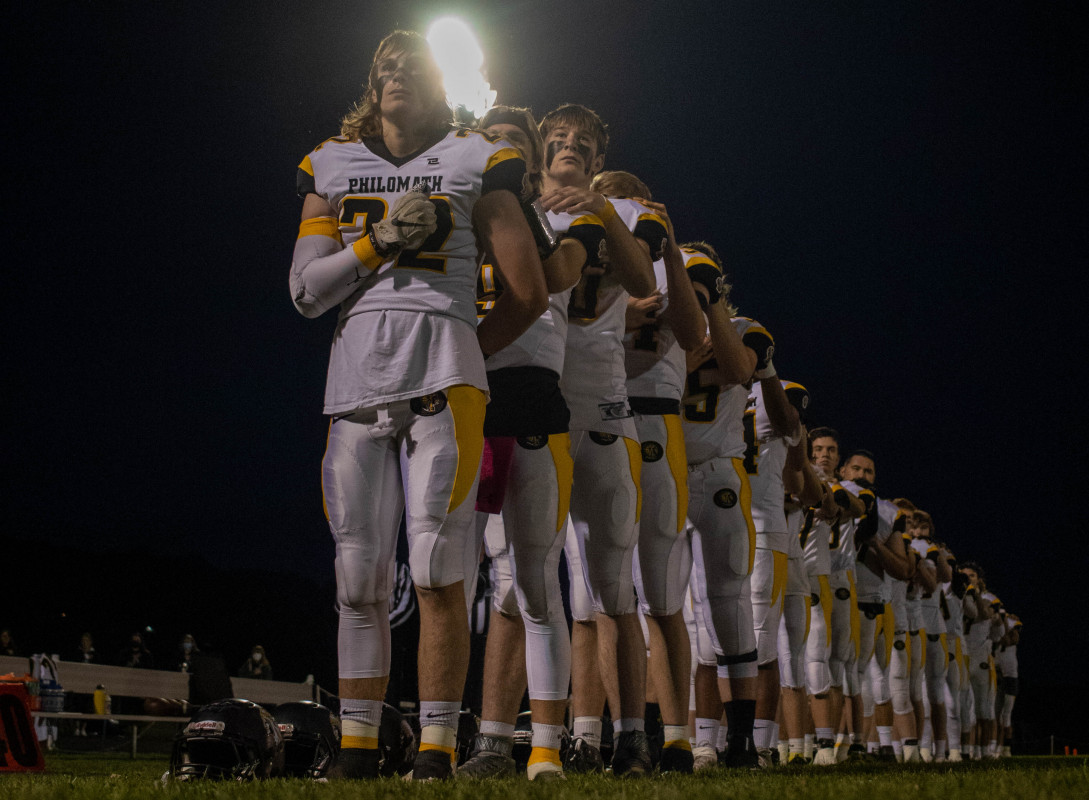 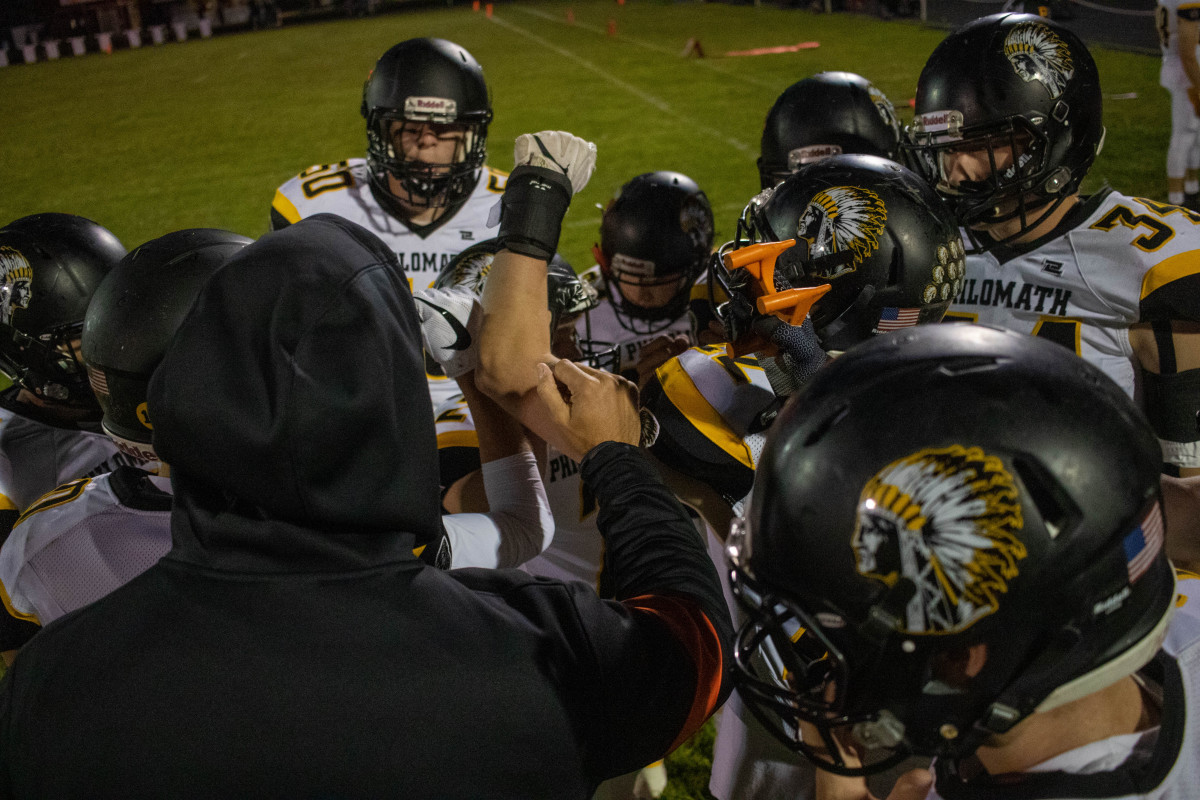 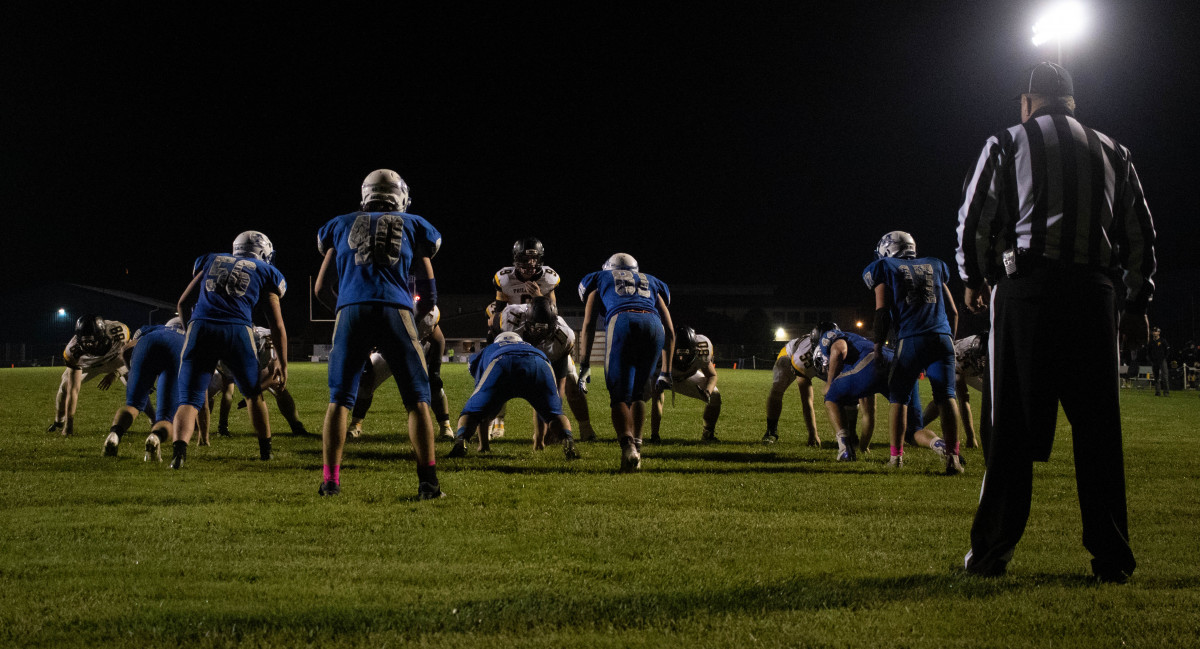 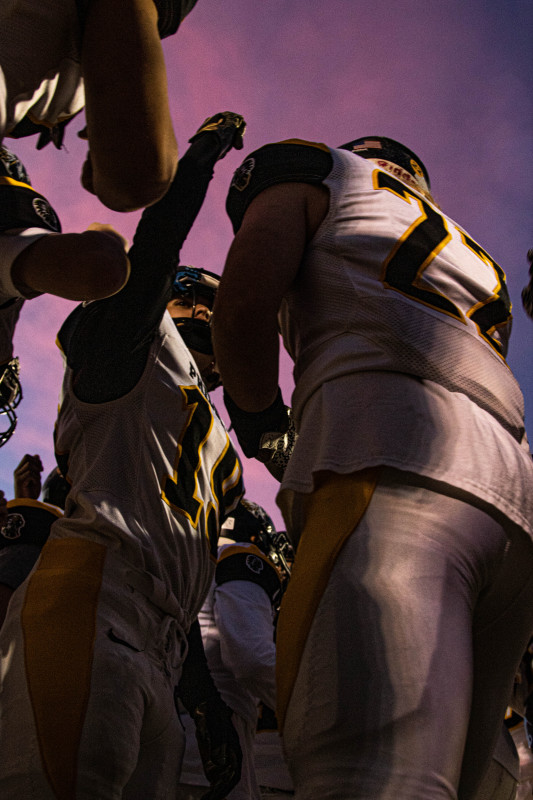 The home team followed with a successful onside kick and was able to run out the clock.

Grove was one of six ball carriers for Amity on the evening and he rushed for 134 yards on 15 carries. Reagan Clark had 86 yards on 14 carries.

For the Warriors, Griffith finished with 47 yards rushing on 12 carries and also caught two passes for 20 yards. Philomath’s No. 24 was all over the field.

“David’s a warrior, he gives it everything on every play — offense, defense; he’s rarely off the field,” Firth said. “He’s 165 pounds or however much he weighs but it takes a toll on your body and he just keeps going. He’s beat up, I’m not going to lie, he’s a running back. He gets hit every time he carries the ball but we just wind him back up and he goes.”

Philomath will play just its second home game of the season on Friday when Dayton pays a visit to Clemens Field. The Warriors will celebrate homecoming and also senior night because the team’s final home game that had been slated for Oct. 29 vs. Taft will not be played and ruled as a forfeit in Philomath’s favor, Athletic Director Tony Matta said. Philomath is trying to schedule a junior varsity game for Oct. 18 or Oct. 19.

Dayton will bring in records of 6-1 overall and 3-0 in league into Friday night’s matchup.

“Dayton will be another tough one — another big, physical team but we’ve got to take care of ourselves,” Firth said.

Conference Standings
(As of Oct. 15)