MYRTLE CREEK — With the opposing team celebrating a homecoming victory, Philomath High’s football players likely had a lot on their minds while walking off the field on Friday night. The Warriors had just lost their first game of the season and it wasn’t pretty — penalties, defensive breakdowns, missing starters and even a sideline incident involving two players were all part of the equation.

It’s the type of game that a team typically wants to move on from quickly, put it in the past and try to right the ship against future opponents. Still, first-year coach Alex Firth knows players need to learn from their mistakes in the 41-8 loss to South Umpqua as part of the ongoing effort to improve.

“The number of mistakes that you have against a good opponent like South Umpqua will come back and bite you,” Firth said. “We made plenty and the score reflected that, so that’s something that I have to do a better job of with the team and correct before we play our next game.”

Heading into the contest at the Myrtle Creek school, Philomath already had a disadvantage with a couple of key players missing from the starting lineup. Quarterback and long snapper Caleb Jensen and outside linebacker Mason Stearns were both out with illness.

“We don’t have a COVID outbreak or anything, there are just some kids that are sick,” Firth said.

The game had a crazy start with two interceptions, a fumble and a blocked punt in the first 3-1/2 minutes. South Umpqua’s game-opening drive ended when senior Blake Niemann picked off a pass on a first-and-10 play.

Philomath failed to move the ball on the ensuing drive and on a fourth-and-6 punt, South Umpqua got the block to set up shop at the Warriors 21. On the very next play, however, Philomath freshman Warwick Bushnell intercepted the ball to again give the Warriors possession.

But on the next play, the Warriors fumbled in the backfield and South Umpqua recovered at the 13. This time, the Lancers took advantage of the situation and following a five-yard run and an off-sides penalty on Philomath, scored on a three-yard pass from Jace Johnson to Kade Johnson.

“It’s kind of a cumulation of some of the things we saw in the first few games — the turnovers and penalties,” Firth said. “That’s something I need to address as a coach and remedy whatever that situation is that’s causing that.”

Philomath’s ensuing drive produced a first down on a third-and-6 with sophomore quarterback Kaden Muir breaking off a 16-yard run but the drive stalled and ended with a punt.

The Lancers quickly made it 14-0 on a 73-yard pass from Jace Johnson to Isaac Real. The TD came on a third-and-20, an indication of the type of night that Philomath would experience.

“They’re pretty good at their passing game. I don’t think we generated as much pressure as we have in the past,” Firth said. “Honestly, they have a good quarterback and they have a good scheme and they just played well.”

Jace Johnson, a junior, completed 15 of 21 passes for 275 yards, settling down after those two early interceptions.

Philomath generated some excitement after going into the 14-point hole when senior Isaac Lattin returned the ensuing kickoff 85 yards for a touchdown. The extra point attempt didn’t come off as planned but ended well when Muir threw left-handed to junior Ty May in the end zone for two points.

South Umpqua added two more touchdowns in the second quarter — the first on a Justin Jenks three-yard run that included a fourth-and-9 conversion for the Lancers. The second TD was set up by a Kade Johnson interception and 16-yard return to give South Umpqua the ball at the 18. Two plays later after a tackle for loss, Jace Johnson hooked up with Tanner Dobeck for a 21-yard touchdown.

Philomath found itself in unfamiliar territory with a 27-8 deficit at the break.

“We talked at halftime about coming out and not worrying about what happened but playing with a little more focus and a little more desire in the second half,” Firth said. “We still had some of the recurring penalties and stuff and again, I will address that and try to figure out a way to limit that because that really hurts you when you play quality opponents.”

Philomath got the ball to open the second half and those penalties and turnovers continued. South Umpqua recovered a fumble at the 34 for another short-field opportunity and cashed in on a 1-yard run by Caj Simmons.

The Warriors couldn’t get much going offensively all evening either on the ground or through the air. The South Umpqua defense held the Warriors to just 106 yards of total offense.

The Lancers scored their final TD on the first play of the fourth quarter to cap an eight-play drive that covered 63 yards. Philomath’s defense appeared as though it might keep South Umpqua out of the end zone when senior Joseph Choi tackled Simmons in the backfield for a four-yard loss on a second-and-goal from the 3. But on the next play, Jace Johnson hit Andrew Christensen on a seven-yard TD pass.

Jacob Williams had 33 yards, David Griffith finished with 25 and Muir added 23 to lead the running game. Muir completed 4 of 14 passes for 27 yards. Chad Russell had a 12-yard reception.

“Hopefully we have their attention now and we have a good week of practice,” Firth said about the coming week. “That’s all we can do, move on, see if we can address what’s going on. … if it’s tackling technique or blocking technique or something, we’ll address it.”

Philomath (3-1) will play at home on Friday, Oct. 1, against Scio. The Loggers will come into the game with a 2-2 record, winning their last two by a combined 66-0 over Harrisburg and Douglas.

Conference Standings
(As of Sept. 24) 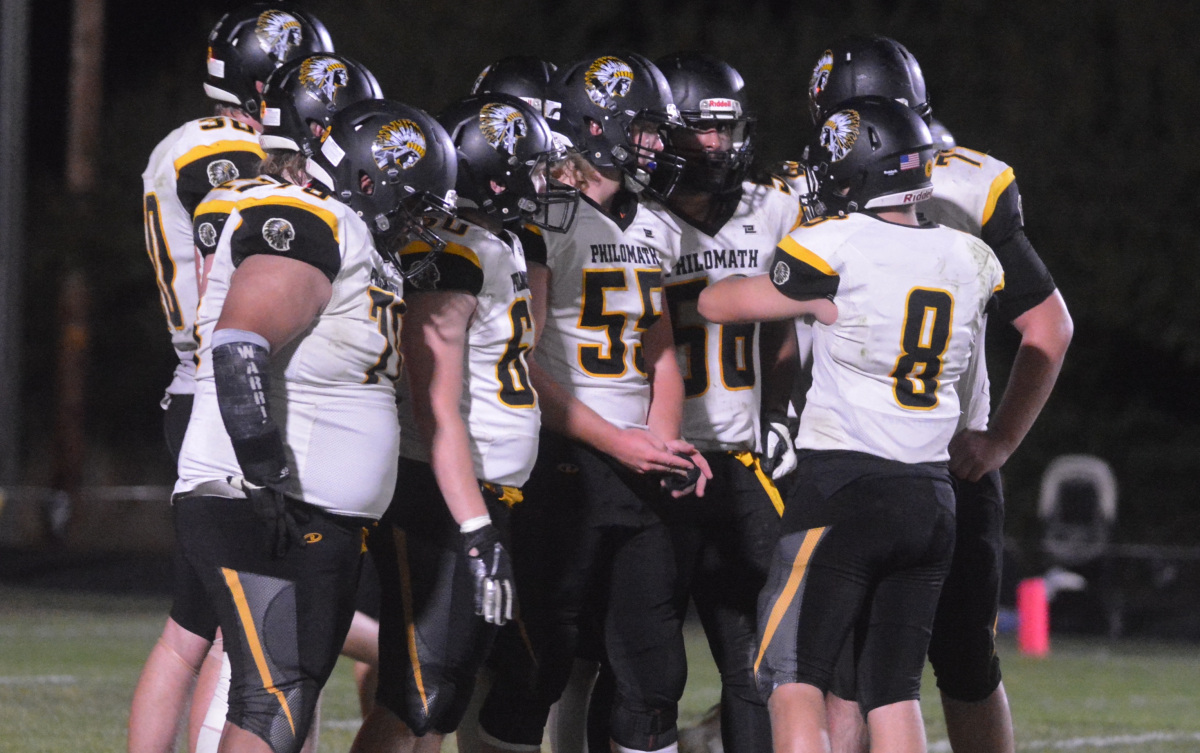 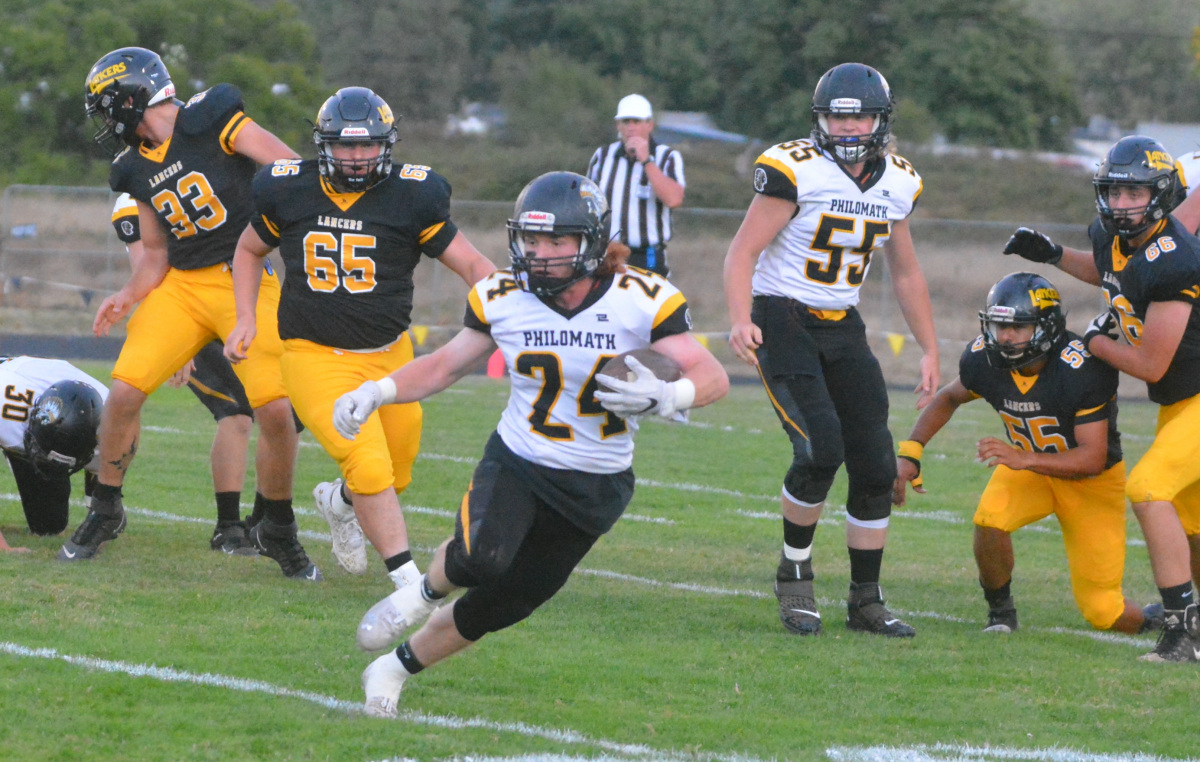 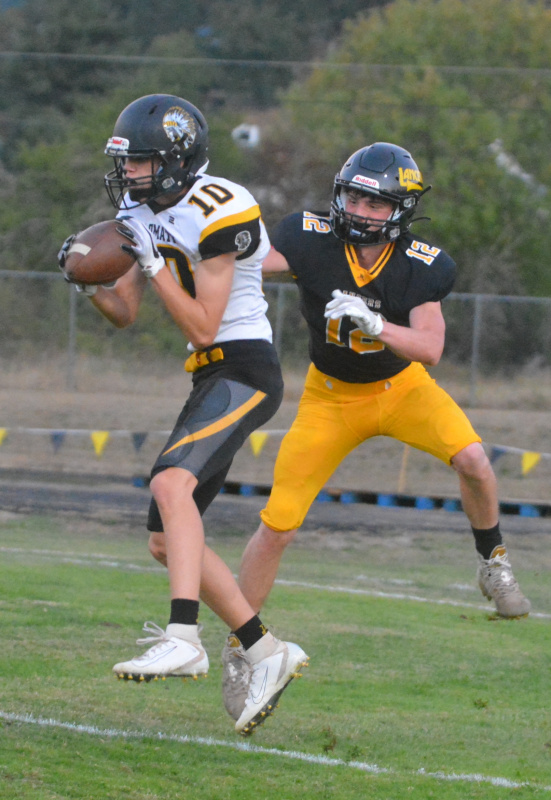 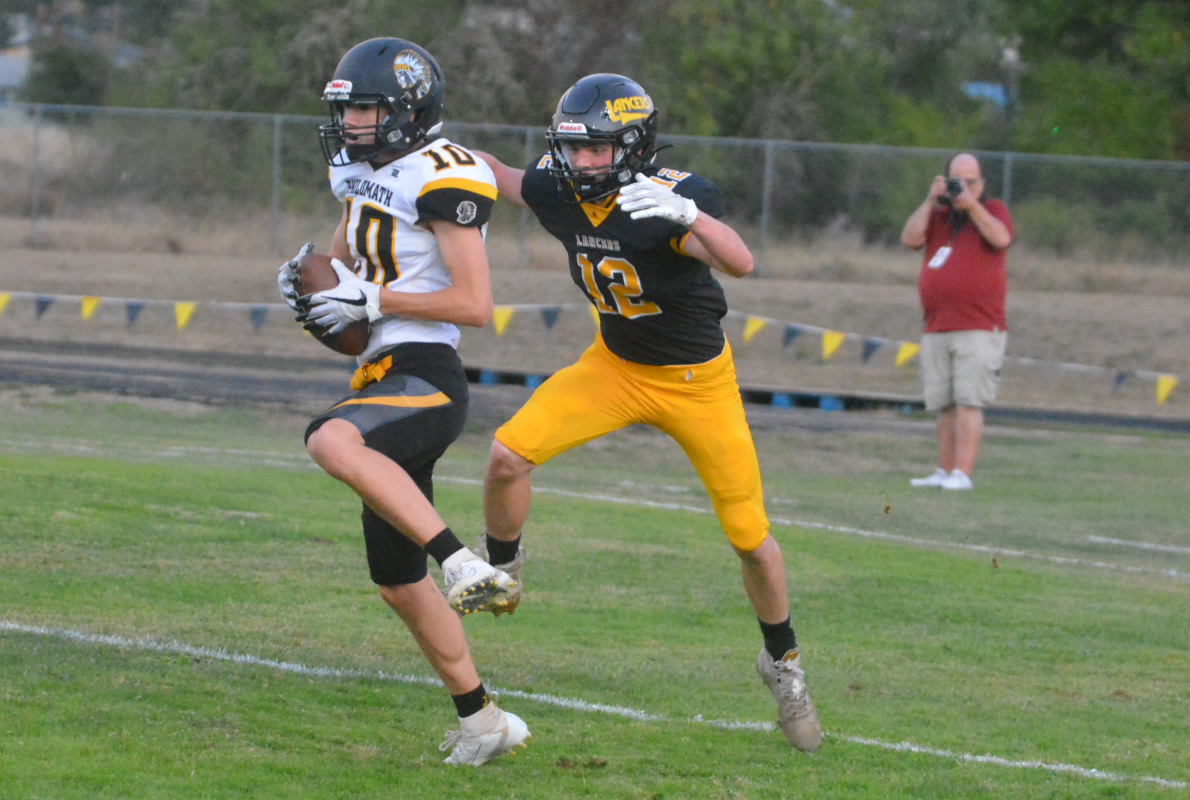 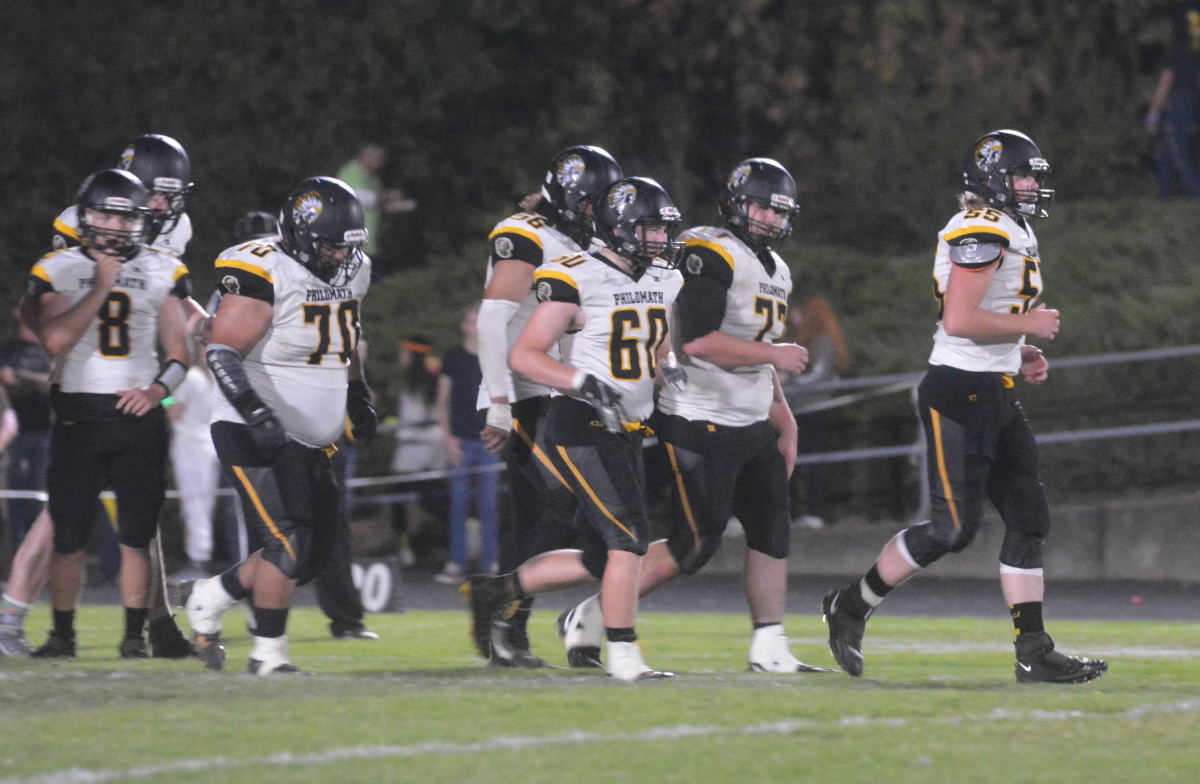 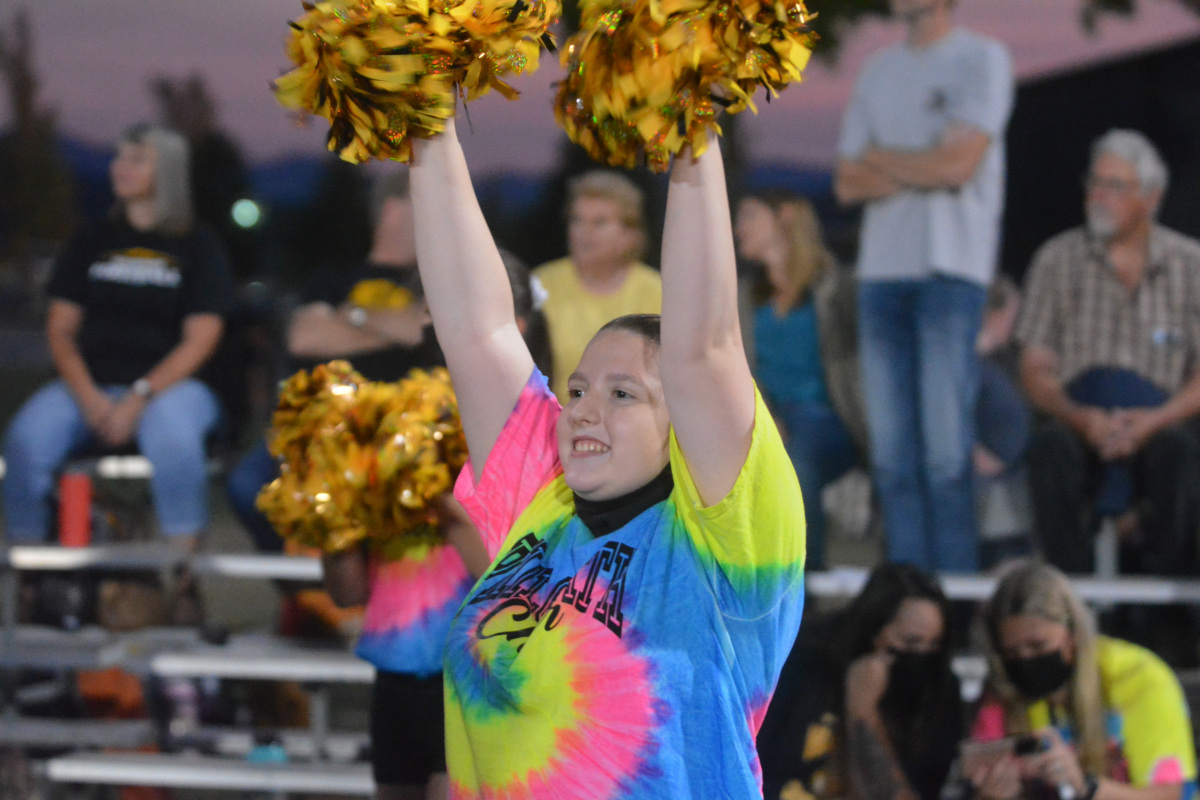 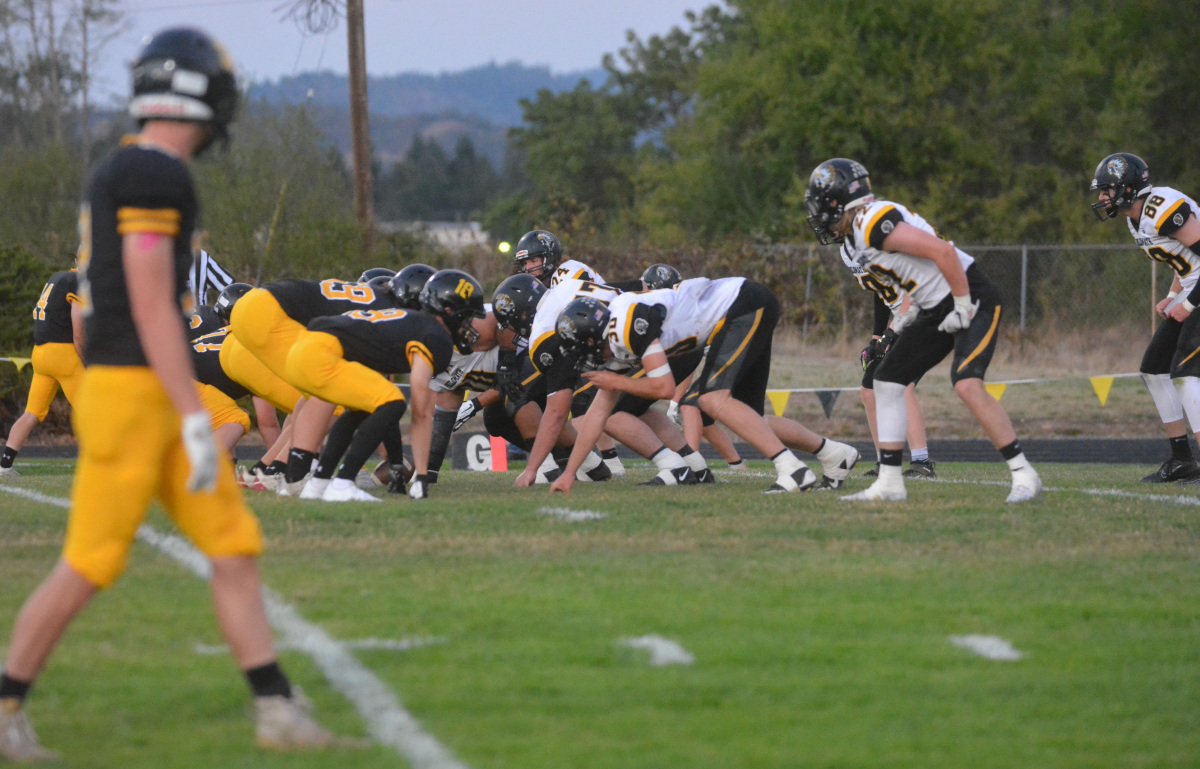 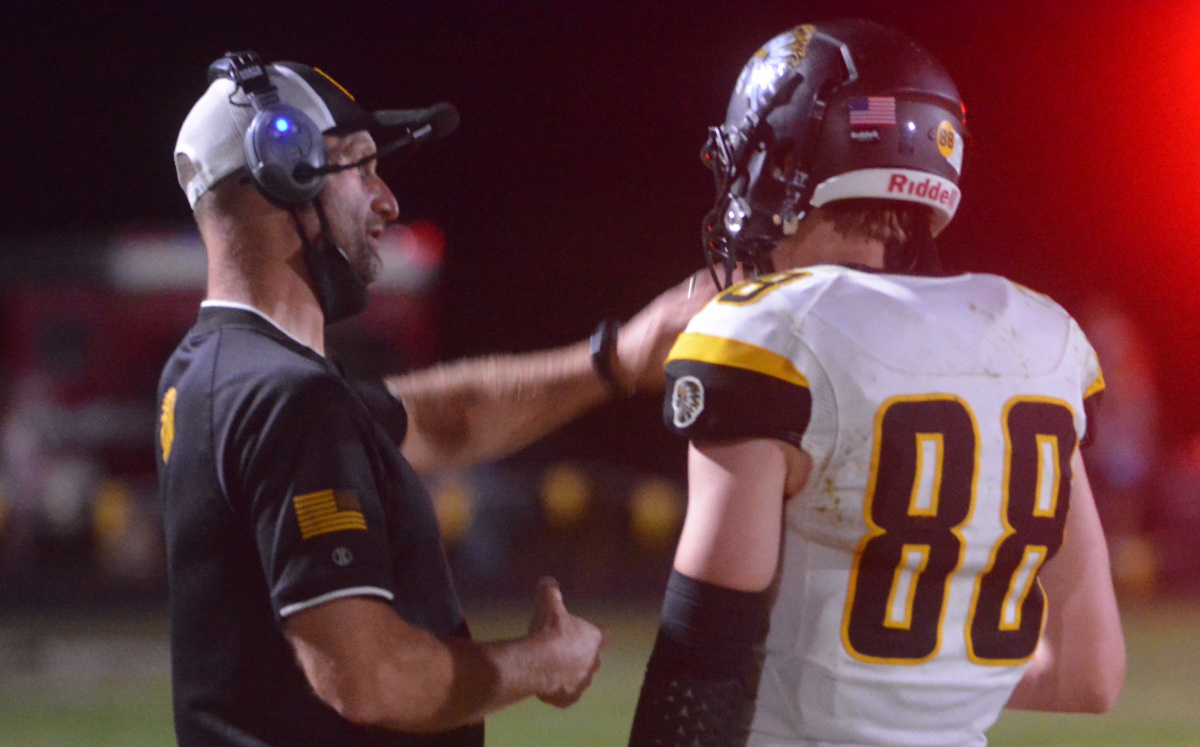 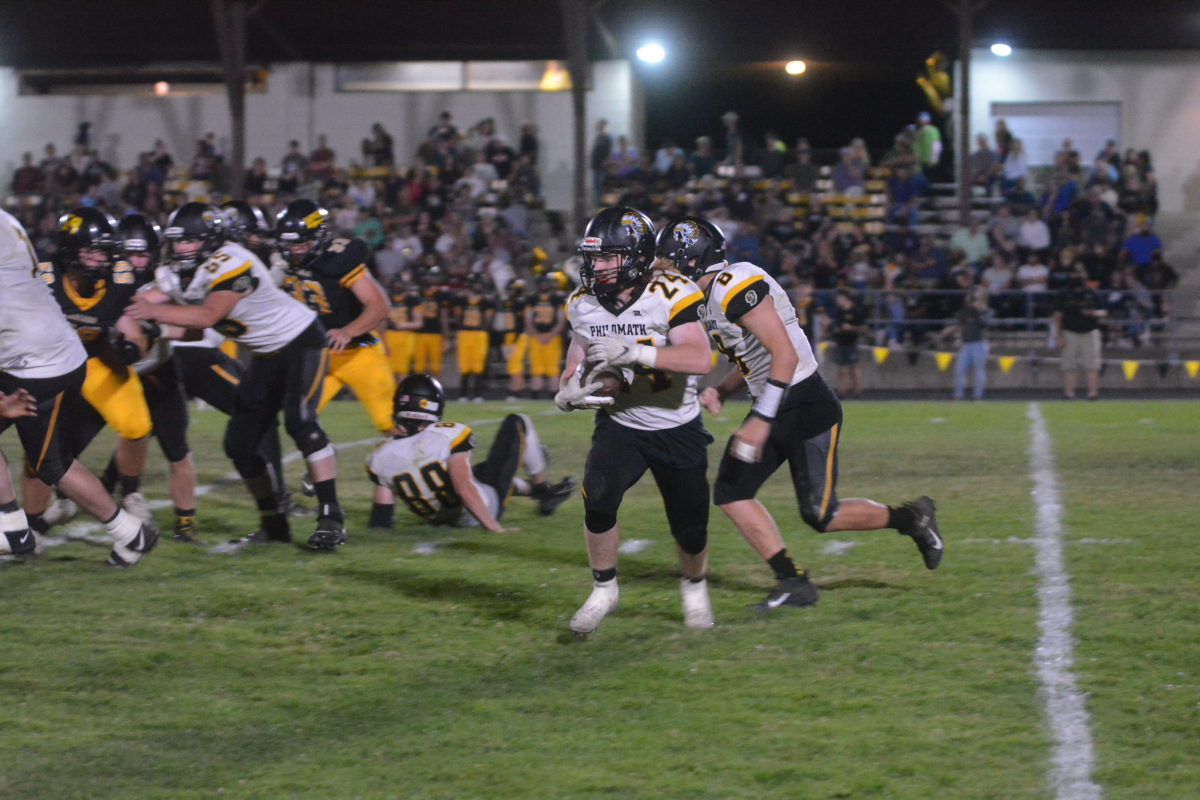 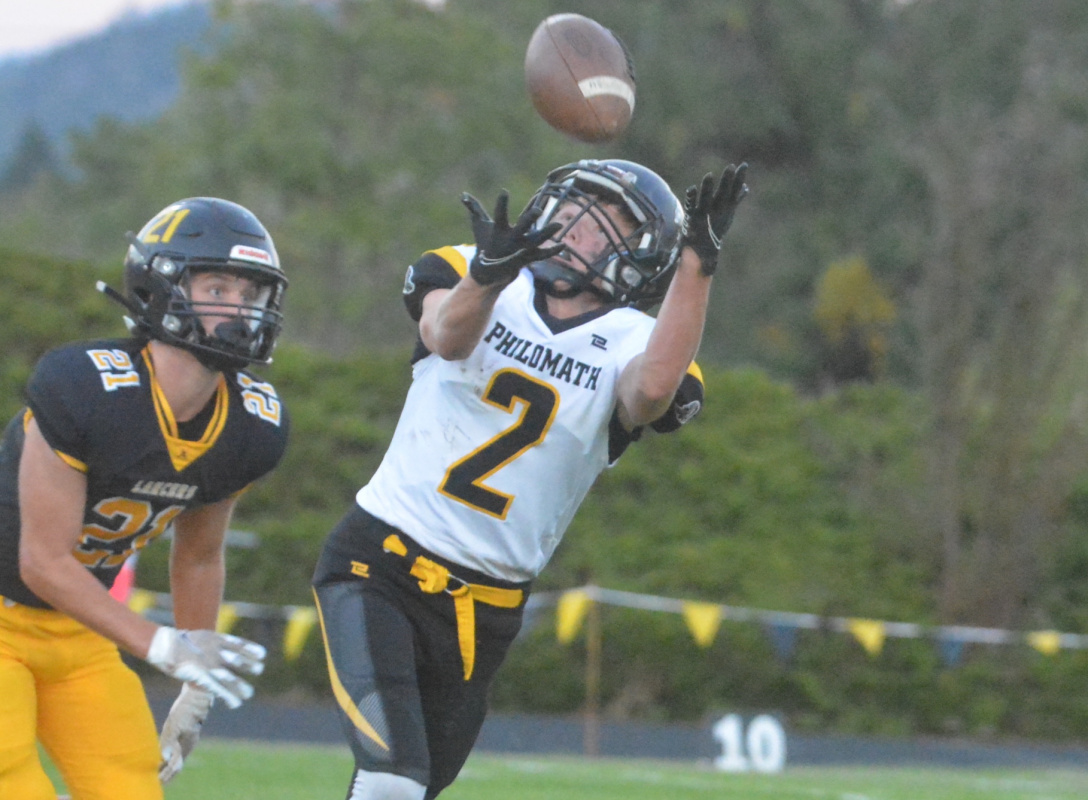 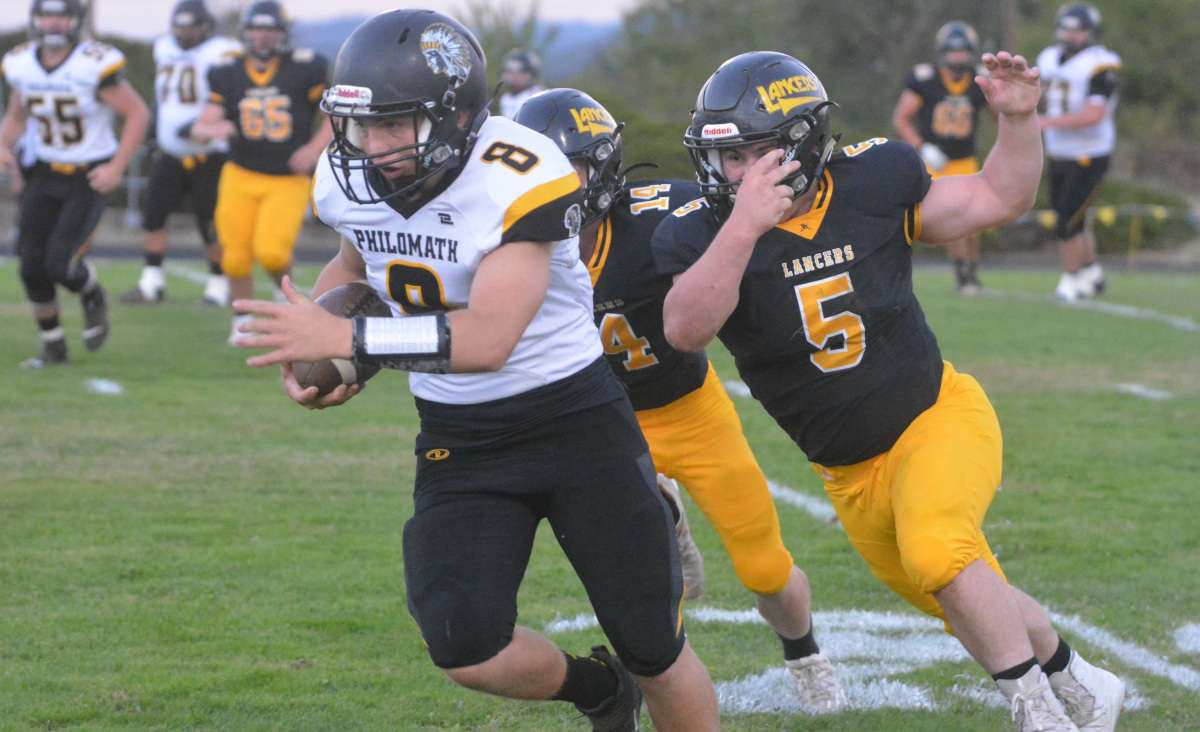 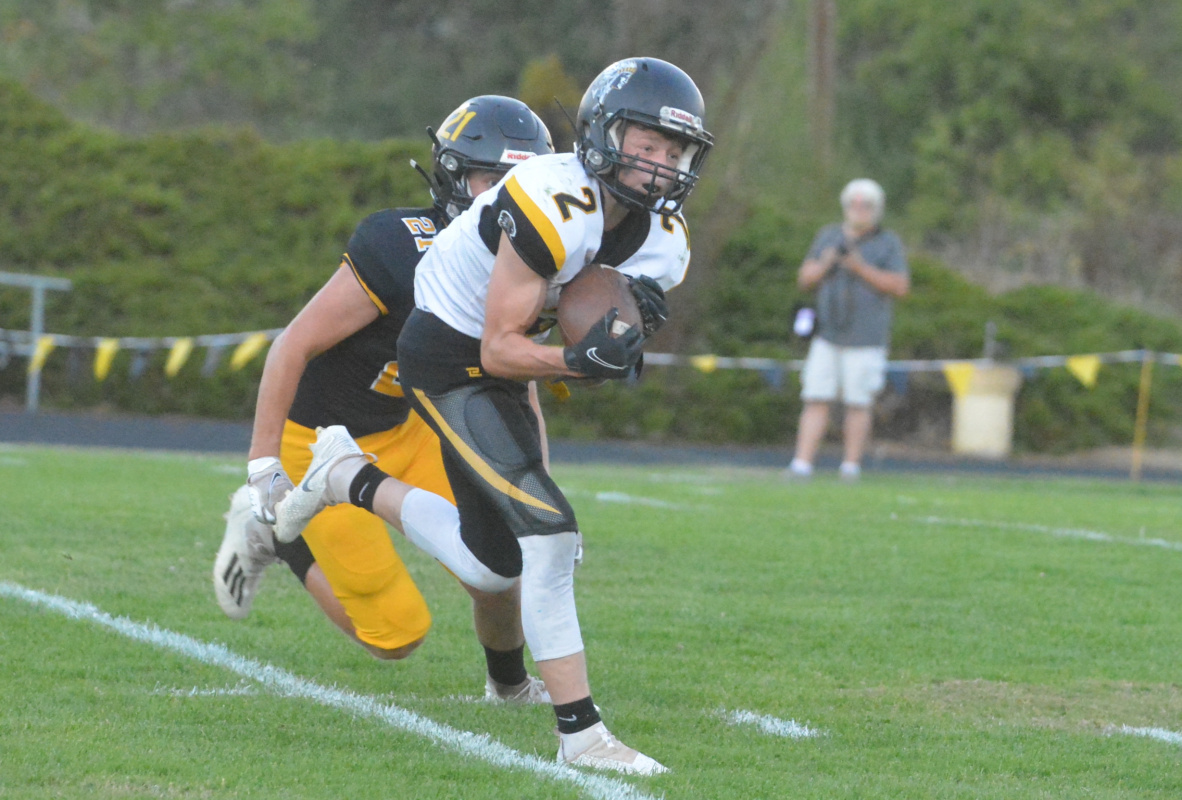 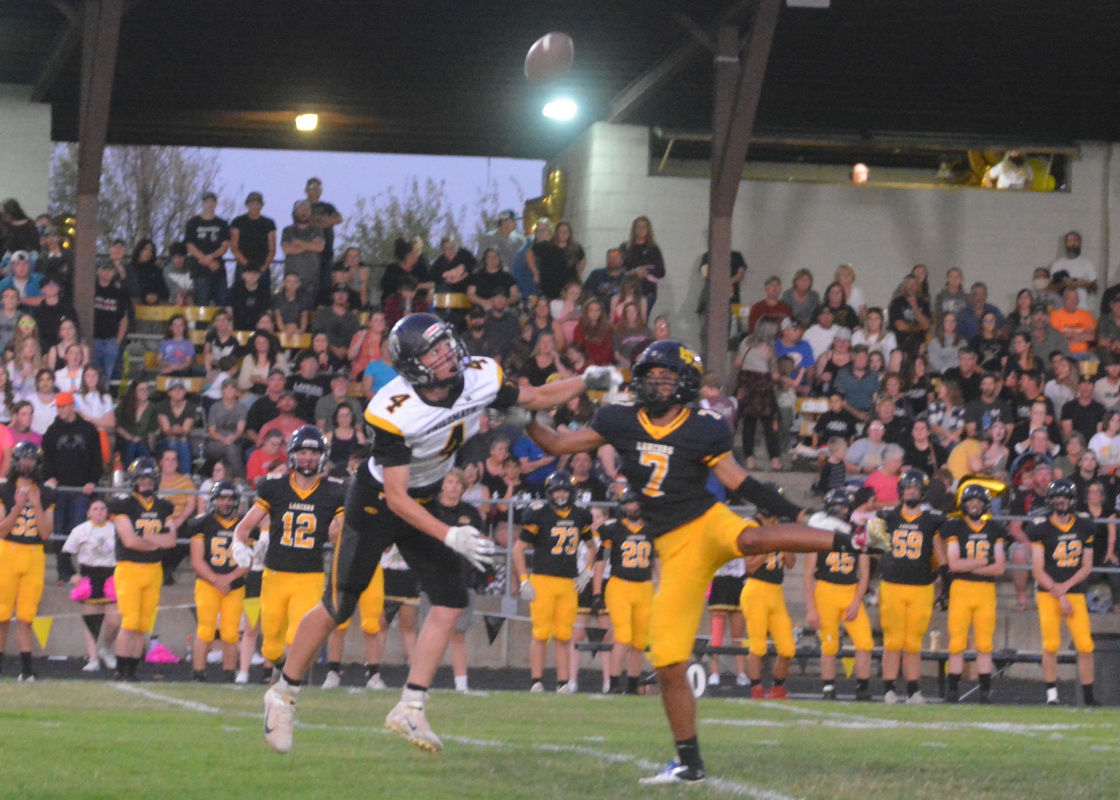 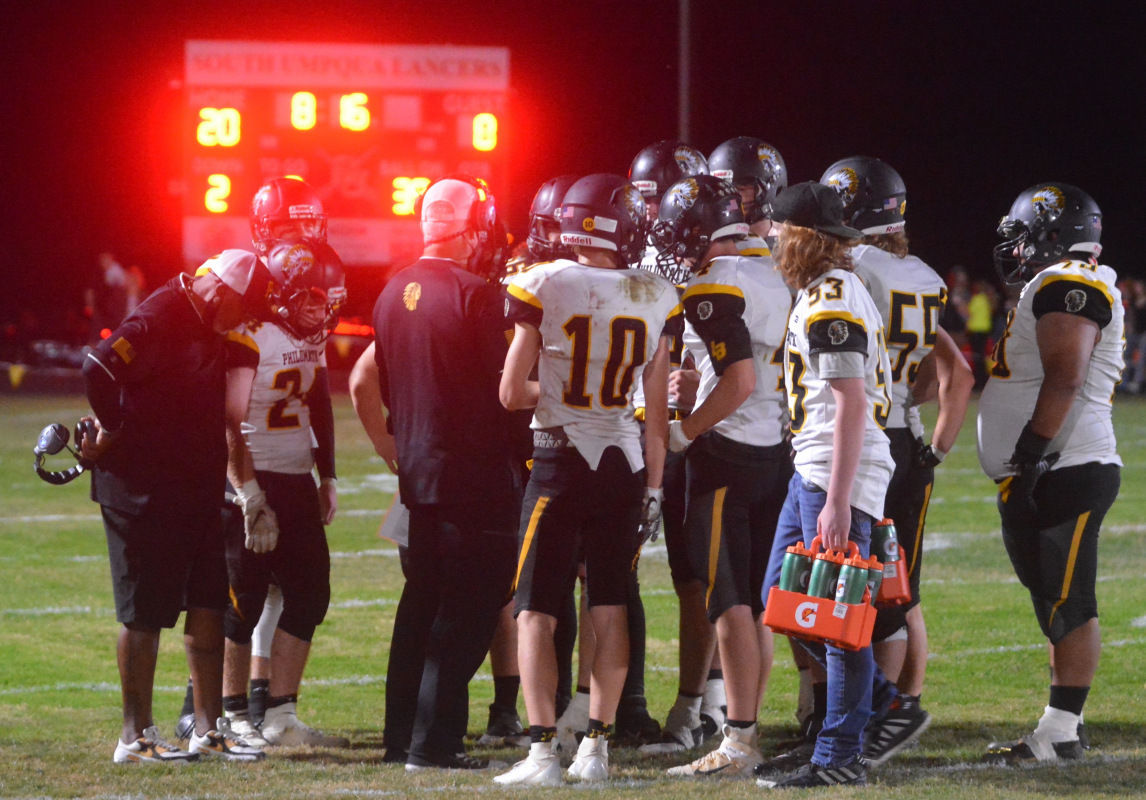 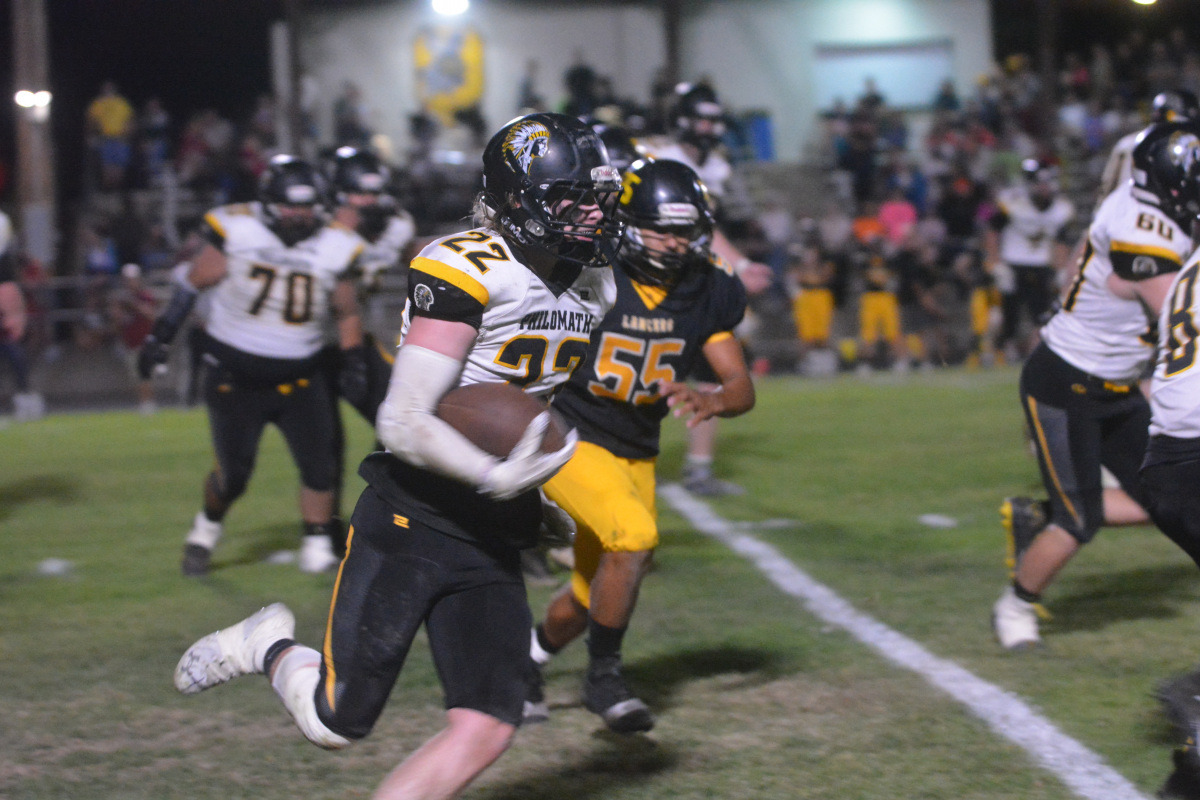