Posing alongside four others for a group photo late Monday morning in Philomath City Park, Pioneer Connect General Manager Jim Rennard plunged a gold-colored shovel into a pile of dirt that had been put down for the occasion.

The group smiled, the cameras clicked and kind words were passed around with heavy machinery serving as the backdrop. The groundbreaking ceremony provided an opportunity for those involved with Pioneer Connect’s massive fiber network project in Philomath to celebrate the moment.

Perhaps a photo opp for some, an excuse to get together to eat cupcakes for others. But for those closely involved with the project, the special day marked the beginning of a new era for the longtime phone and internet cooperative.

Rennard called it the highlight of his career.

“I have been in the telecommunications industry since 1989 here in Oregon,” Rennard told those in attendance. “For me, this is the most exciting thing that I have done in my professional career. I couldn’t be prouder at this moment.”

Pioneer Connect expects the fiber-to-the-home network project to be completed in a year. When finished, the cooperative said more than 2,400 homes and businesses in Philomath will have access to internet speeds of up to 1 gigabyte per second.

“About two years ago, we did some strategic planning and our strategic planning involved delivering the services that our members wanted and needed as we look out to the future,” Rennard said. “Becoming our own ISP was a first step in that strategic vision and we accomplished that last year and that will be completely done in the next month or so. The second step is utilizing that platform to deliver the high-speed capability that fiber will enable.”

Pioneer Connect utilized a competitive bidding process and awarded the contract to North Sky Communications, a construction company based out of Vancouver, Washington. Pioneer Connect has worked with North Sky in the past.

“The project has been designed and engineered to be completed in 12 months or less,” Rennard said. “One of the reasons we selected North Sky is because of their size. They have lots of construction resources that they can respond quickly to in terms of if we run into an issue. … They have an incentive to get it done in that timeframe.”

The project is part of Pioneer Connect’s long-term strategic plan to replace its copper network. According to the cooperative, a fiber network “levels the playing field for small, rural communities to compete with larger, urban areas for business growth, expansion and economic development.”

“That’s when the majority of that was done but I would suspect some of this copper is 20, 30, 40 yeas old,” he said. “To do what people need to do in today’s telecommunications world and the internet, you have to have fiber. And that’s why we’re upgrading.”

The cooperative is funding the project from start to finish without any outside resources. Rennard estimated the cost at $10 million.

Pioneer Connect’s board of directors had been thinking about an upgrade to fiber technology for some time — even before the pandemic hit in the spring of 2020.

“If you looked at the historical trends pre-pandemic, you would’ve been on the same trajectory,” Rennard said in reference to changing technology. “More and more people were working remotely and video streaming and there’s 8K TV and online video gaming — the trends were there. The pandemic just accelerated it, so it moved the timeline up two, three, four years, which isn’t terribly long but these trends are definitely going to continue.”

With modern technology’s cyber demands, faster speeds are becoming a must. Streaming services have become mainstream with average households having multiple services. Then there are things like telehealth services and distance learning.

“The other big thing about fiber is the upload speeds are robust because you can get the equivalent upload speed,” Rennard said. “A common example of what we say is people backing up their data to the cloud.”

A couple of longtime Pioneer Connect board members were on hand for the groundbreaking.

“I think it’s just an absolutely wonderful opportunity for the community, not only this community but it goes from there,” said Carol Stueve, who has been on Pioneer Connect’s board of directors for more than 30 years. “It’s all good, all good changes for the people.”

Ray Hunter, who is the board’s vice president and represents the Waldport area, believes it’s a must to go to fiber technology.

“I think it’s the best thing that’s happened,” Hunter said. “We probably should’ve started earlier and we have been talking about it. It hasn’t been just two years — we’ve brought it up and brought it up.”

Local residents have other internet options, such as Alyrica. Based in Philomath, Alyrica primarily offers wireless plans but does have fiber optic capabilities in specific areas. Comcast also has internet plans and uses coaxial cable for its services. 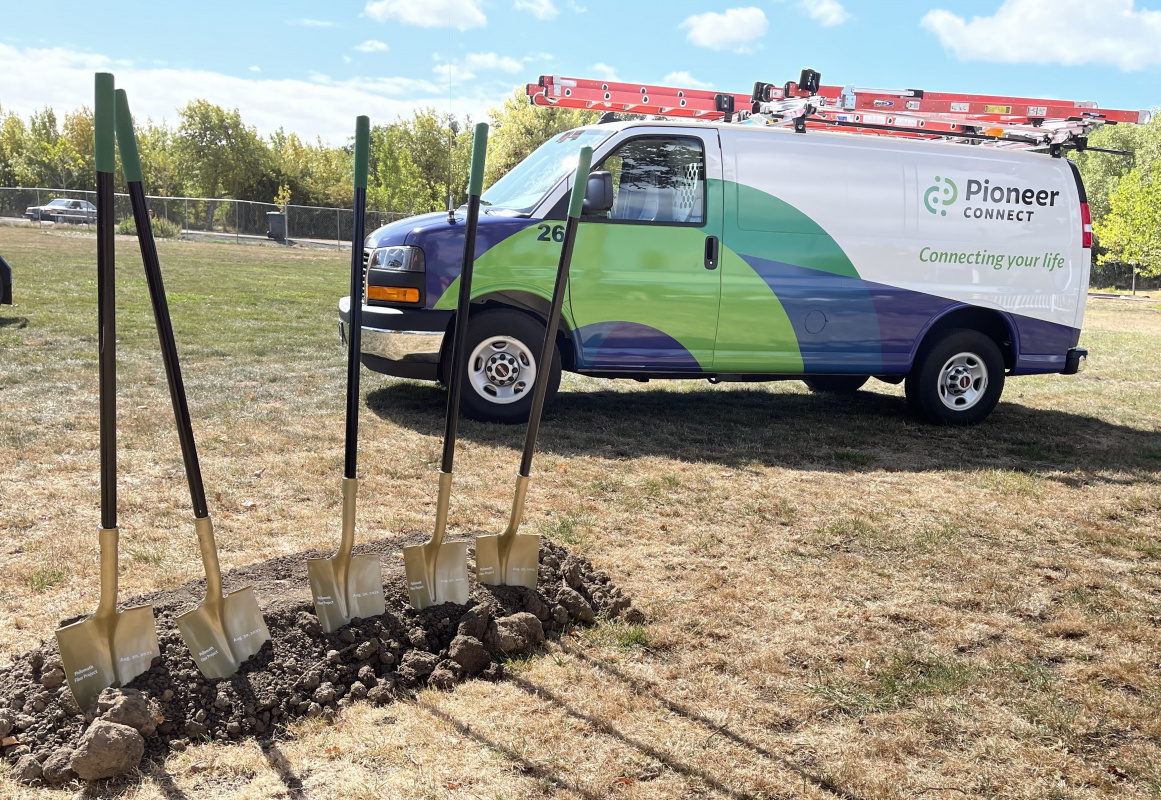 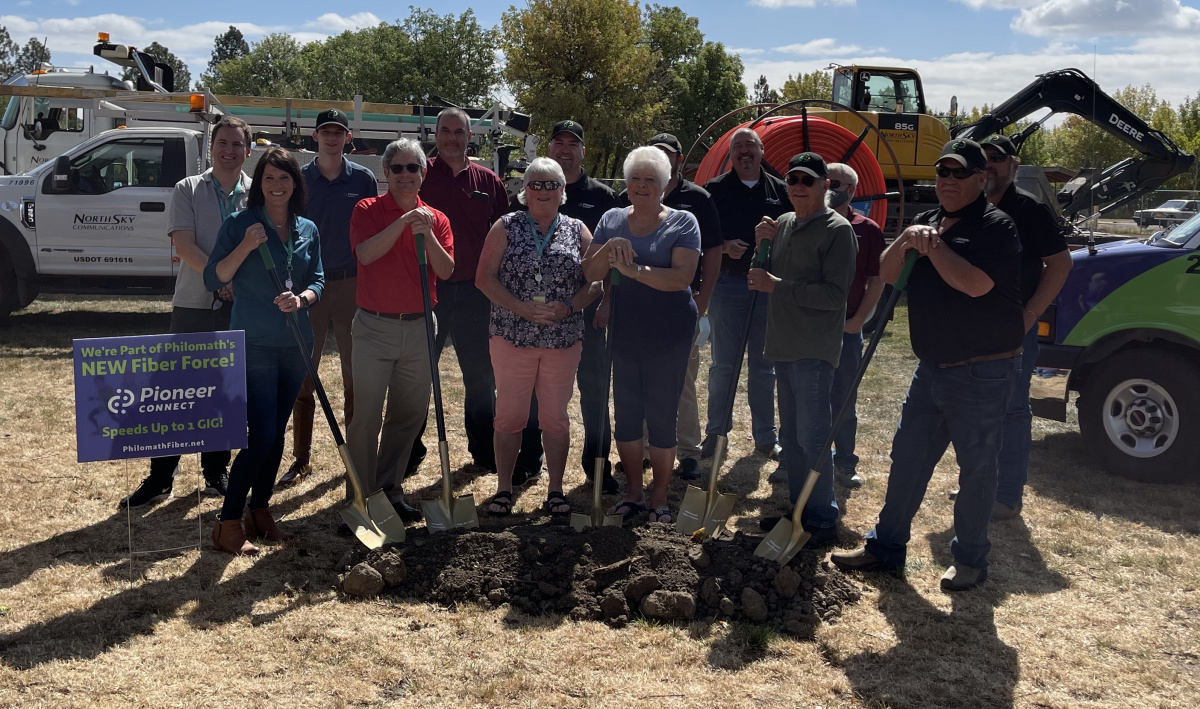 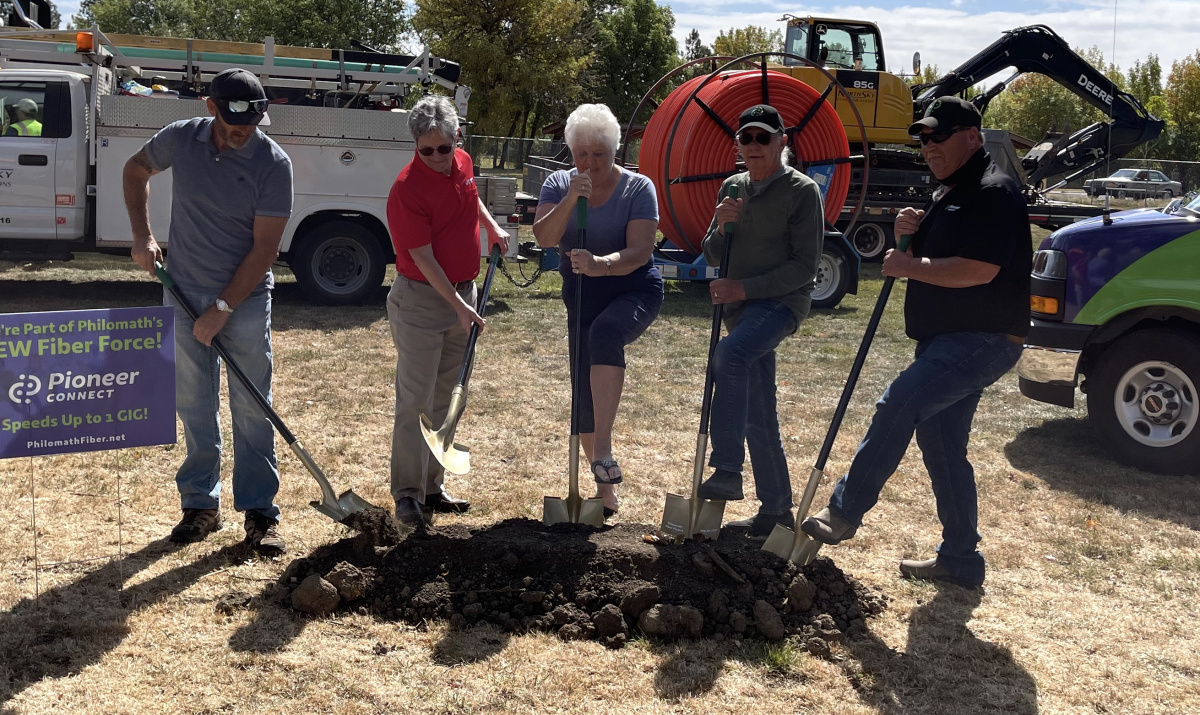 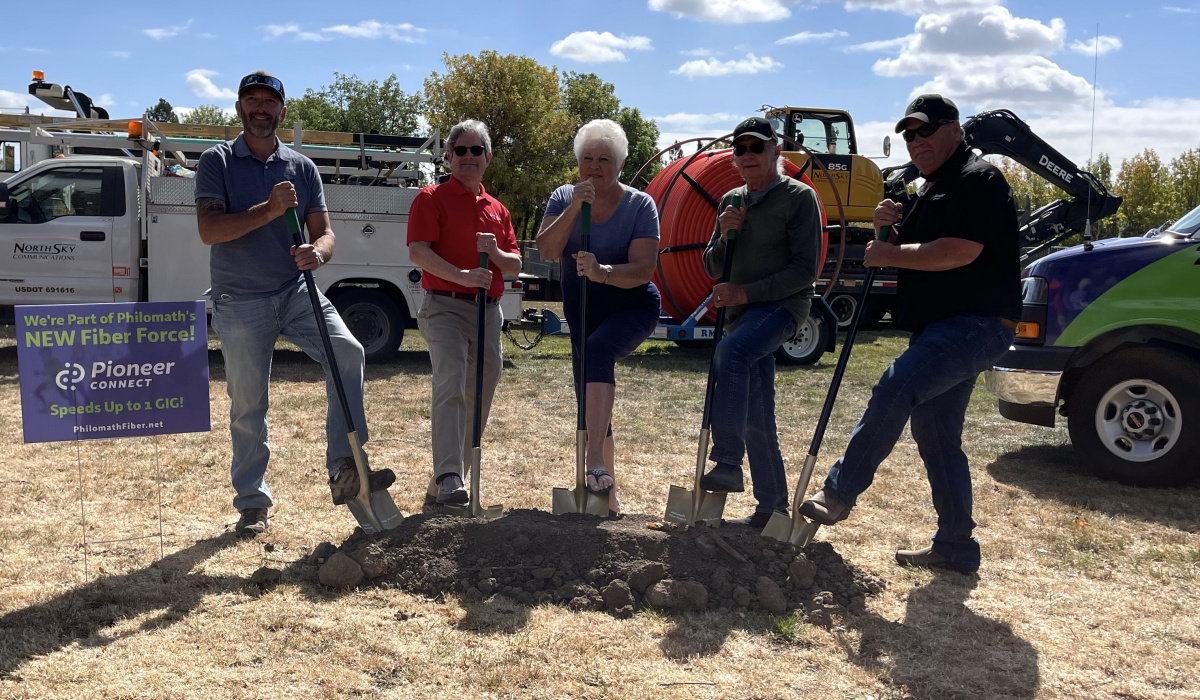 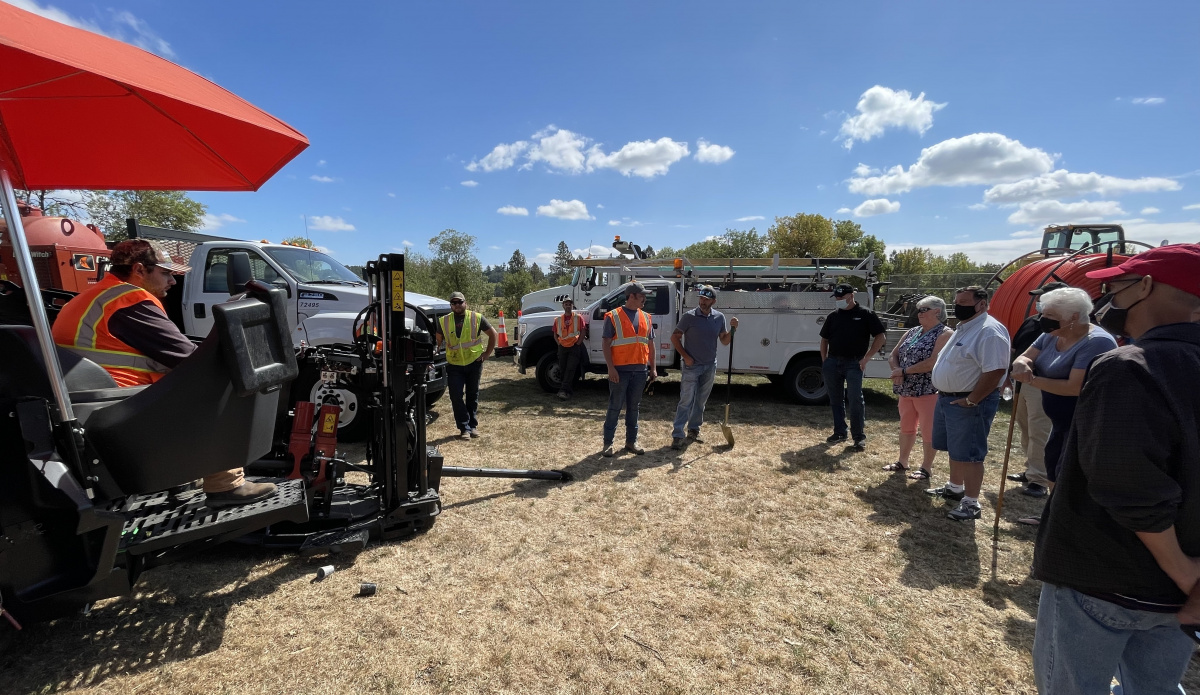 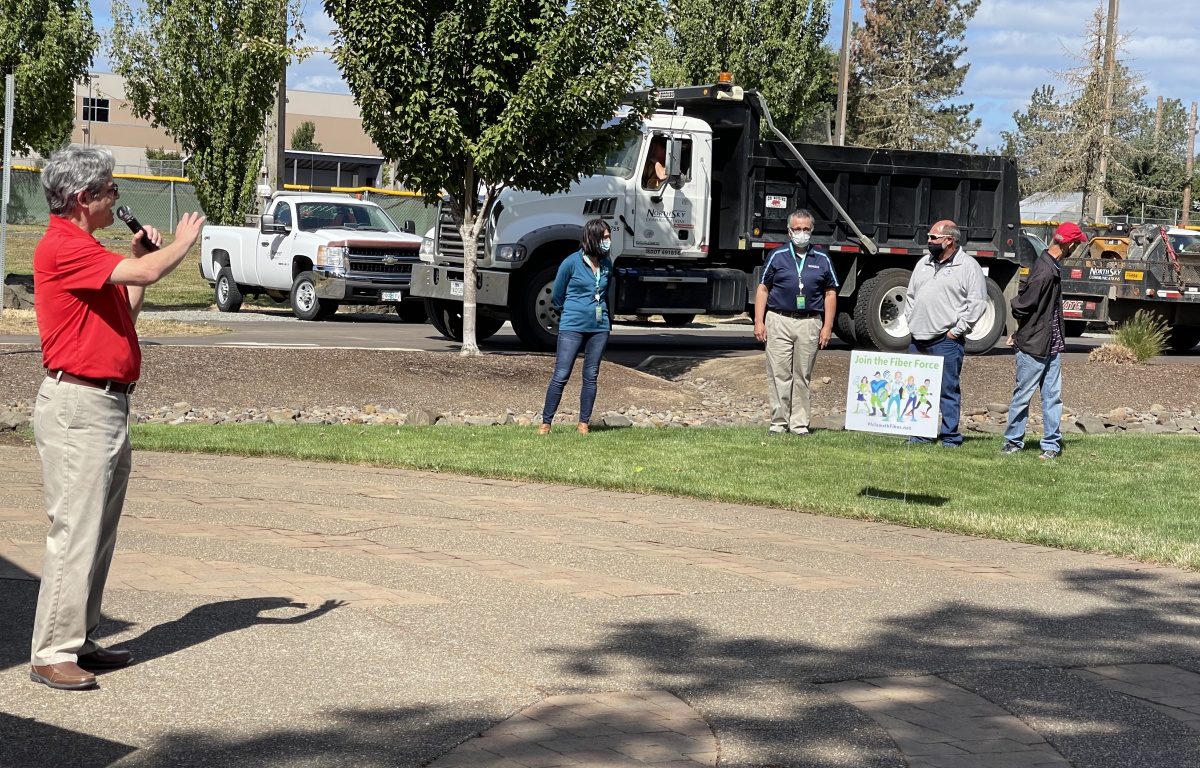 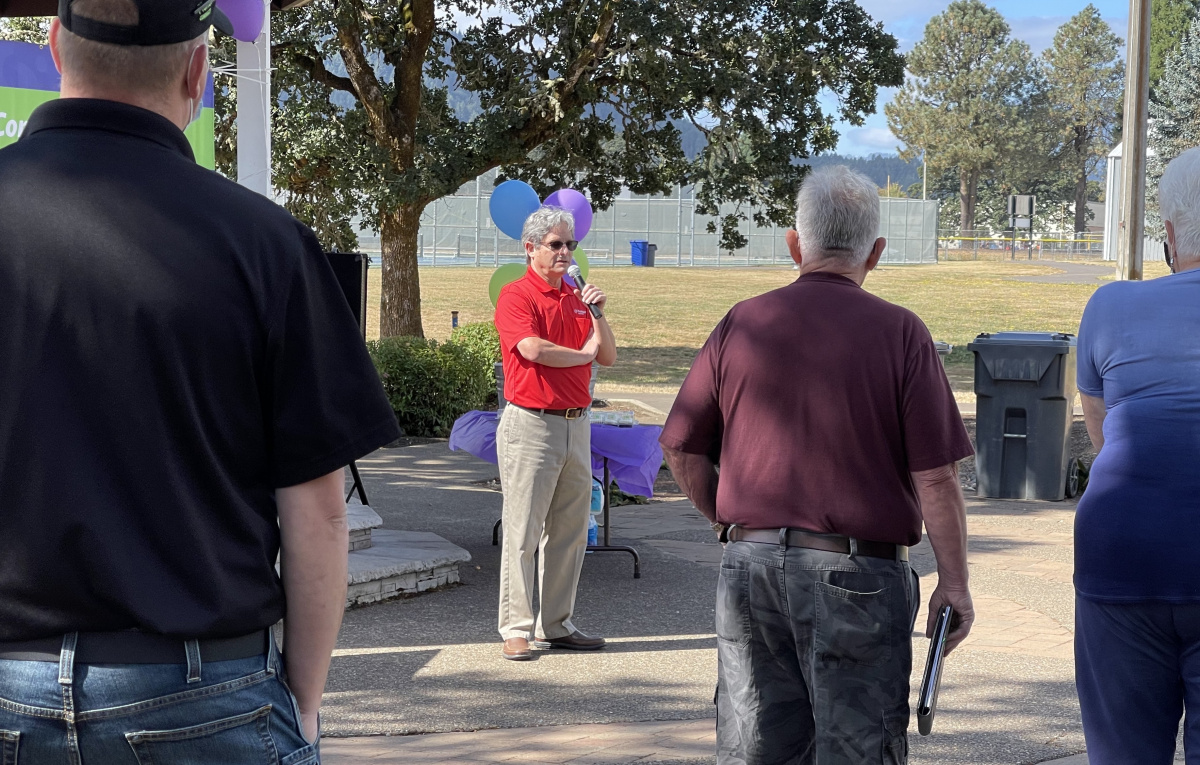 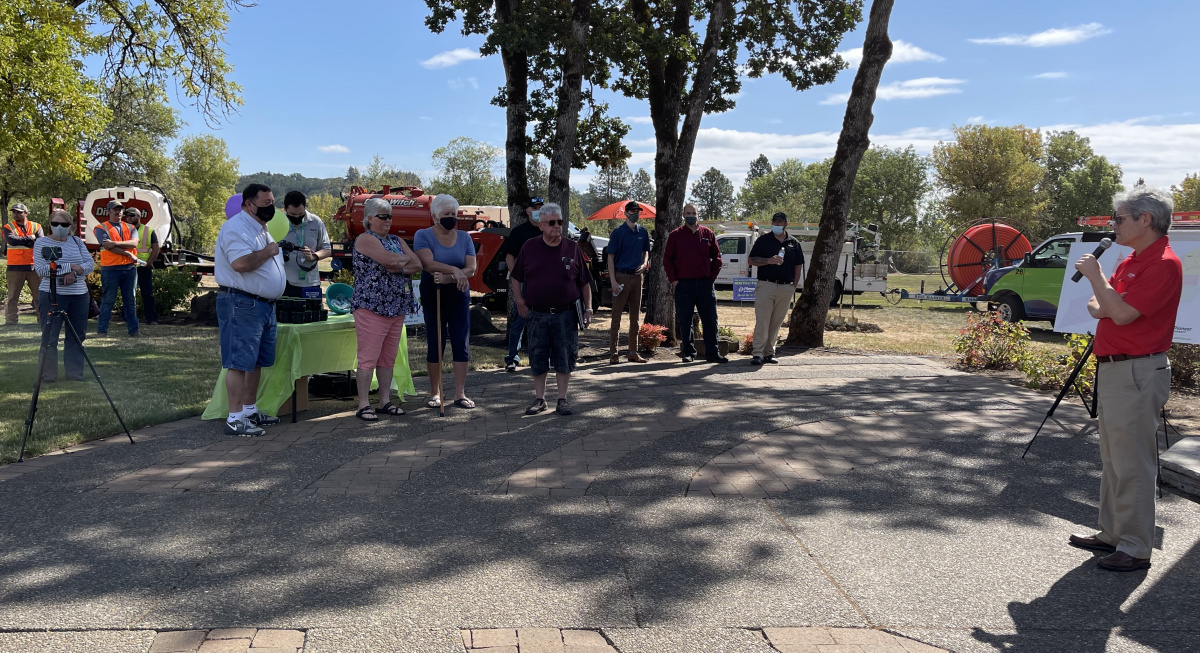 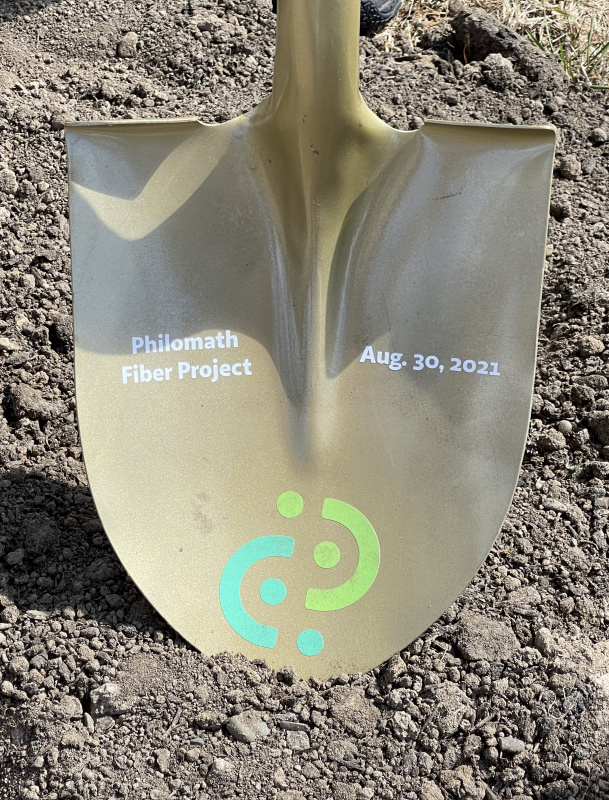 “As a co-op, we want to get fiber to 100% of our members,” Rennard said. “Philomath was just a natural place to start and we’re kind of working from the city out. From a design and engineering construction standpoint, you can’t serve the remote ends of the exchange without building the infrastructure from the central office outwards.”

Establishing fiber networks in other communities that Pioneer Connect serves are on the drawing board.

“We are aggressively deploying fiber and if I had my little magic wand, I would deploy it everywhere tomorrow,” Rennard said. “The two things that make that difficult to do are time and money, but we are actively looking at places where we can get fiber out as quickly as we can.”

Pioneer Connect and North Sky plan to work in phases that are broken down by predetermined zones, installing new fiber and removing the existing copper network. The fiber network will be installed in the ground and Pioneer Connect has a process in place that involves reaching out to residents, getting permission and reviewing what’s underground to avoid any unforeseen issues.

“One of the things we’re reluctant to say is when and where people are going to get it, which is why we kind of are directing them back to the website to keep them apprised of the status,” Rennard said. “The construction may move from area to area depending on a whole variety of factors that no one could predict right now.”

Some Philomath residents living in newer sections of town already have access to Pioneer Connect’s fiber services. The co-op has been installing in new housing over the past five years.

“We put that up so people could get the information,” Rennard said. “That will be helpful for people to get a lot of their questions answered because it’s kind of confusing. All of this internet stuff’s confusing no matter what you try to do.”

ABOUT US
The Philomath News is a hyperlocal digital news site providing news, features, sports and information to our valued readers. The News strives to partner with and support local businesses and organizations, provide a voice to Philomath citizens, report news with accuracy and fairness, promote community events and recognize our achievements. We want to build a reputation as a trusted source of information that adds to the lives of our readers.
Contact us: [email protected]
FOLLOW US
© Philomath News 2022