Philomath rolls over Willamina on the road, 35-0

With a four-touchdown lead in the second half at Willamina on Friday night, Philomath High coach Alex Firth started to work in some different players to get them snaps. Quarterback Caleb Jensen had been sidelined since the Woodburn game on Sept. 17 and so he wanted to get him some reps behind center. Coaches also wanted to see some of the younger players on the field, including freshman Grant Niemann at running back.

The game clock showed 1:35 remaining in the third quarter when Philomath set up shop at its own 12-yard line for a new offensive series. The plan was to feature Jensen and Niemann in the backfield but in a moment of miscommunication, senior Jacob Williams ran onto the field and lined up at tailback.

Seconds later, the Warriors led 35-0 — which ended up as the final score — after Williams broke free on an 88-yard touchdown run.

“I thought the kid was going to catch me but I had the stamina and the speed and I just have to thank my O-line, they did a killer job,” Williams said about the TD run. “Everyone blocked perfectly and it worked out in my favor.”

The play was supposed to be a counter, Williams said, adding, “But I didn’t really counter, I just went to where there was a hole and the O-line did their job.”

Firth said those big holes — like the one on the Williams run — started to develop more consistently in the second half after Philomath made halftime adjustments with its blocking scheme.

“They had shifted their front differently than we thought, so we had to make an adjustment,” Firth said about Willamina’s defense. “I think it paid off in the second half.”

With the 35-point lead, the game went into mercy rule mode with a running clock. (The OSAA’s executive board changed the mercy rule point differential from 45 to 35 during the summer of 2020). But with time coming off the clock so quickly, Jensen never got another snap at QB because Firth also wanted freshman Caleb Russell to get in some work at the position. Niemann ended up getting seven carries.

Williams had an impressive stat line with 145 yards on eight carries.

Philomath (5-0 overall, 2-0 Special District 1 West) now prepares for another road game this coming week at Amity, a team that beat the Warriors 34-6 last season and this fall is considered to be among the top teams in the league.

In Friday night’s win, Philomath looked the part of heavy favorites from the beginning. Still, the Warriors looked out of sorts for a good portion of the first half.

“I think we were rusty, we kind of were sleepwalking in the first half,” Firth said. “You don’t get live fire for a week and you come out and the timing was off a little bit. There were plays to be made and we didn’t make them.”

Philomath’s scheduled game against Scio the previous week had been canceled with the Warriors awarded a forfeit win.

“I feel like it threw us off a little bit in the first half,” Williams said about not playing last week. “We came out just a little groggy, but we had a good talk in the locker room and came out hot … it felt good.”

Sophomore Kaden Muir started at quarterback for the second straight game and proved to be an elusive runner that Willamina’s defense had trouble containing.

“We run a little inverted veer read that he ran very well,” Firth said. “He had several good runs off of that — read it well. I thought he threw the ball well … there were some balls that we probably should’ve caught.”

Philomath went up 7-0 with a touchdown on its second possession. Senior David Griffith scored on a 10-yard run to cap a 10-play, 80-yard drive that took 4 minutes, 18 seconds off the clock. The TD came one play after Philomath had converted on fourth-and-8 when Muir connected with junior Ty May on an 18-yard pass. Earlier in the drive, senior Isaac Lattin picked up 27 yards on a reception.

Willamina couldn’t get much going in the first half against an aggressive Philomath defense. Griffith sacked the quarterback on the Bulldogs’ second possession and late in the second quarter, junior Isaac Workman recovered a fumble.

In all, the Warrior defense limited Willamina to 15 total yards in the first half — 16 passing and minus-1 rushing.

Philomath took a 14-0 lead with 4:43 left in the second quarter on a 2-yard run on third down by Muir. The Warriors had a short field with the possession starting on the Willamina 44. Muir and Griffith both picked up big chunks of yardage on the ground to set up the TD.

On Willamina’s ensuing possession, sophomore quarterback Saxon Stockwell went down with an injury. Medical personnel on hand were very careful getting him off the field and Stockwell was taken away in an ambulance.

In the second half after those adjustments, Philomath found a productive rhythm that put the game out of reach for the home team, which was celebrating its homecoming. On the first play from scrimmage for the Warriors, Williams broke free on a 41-yard run down to the 2-yard line. Two plays later, senior Blake Niemann crashed through the middle behind an offensive line surge for the touchdown and a 21-0 lead.

Willamina on its next possession started the drive with quarterback Austin Carrasco attempting a pass toward the left sideline. Philomath sophomore Preston Kramer picked off the pass and danced into the end zone untouched for another quick Warriors score with 8:57 left in the third.

Kramer knew what was coming for his first high school interception.

“I went in and saw the formation and I’d seen that they had done that play earlier, actually I think they did it twice — the exact same throw — and the coaches put me at the perfect spot,” Kramer said. “They told me what play they were going to do, I read it, and got the pick. Thanks to the coaches for putting me in the right spot.”

Willamina later had its best drive of the game in the third quarter but Philomath did force a punt. On the ensuing possession, Williams sprinted 88 yards to the end zone and the remaining time in the game went by fast with the running clock.

Philomath ended up with 338 total yards in the game while limiting Willamina to 87. The Warriors’ run defense held the Bulldogs to just 2 yards on 25 attempts. Besides the 145 by Williams and the 62 by Griffith, Muir had 34 yards on the ground and Grant Niemann finished with 26. May had two catches for 33 yards. Lattin had the other Philomath catch and connected on all five of his extra point kick attempts.

Conference Standings
(As of Oct. 8) 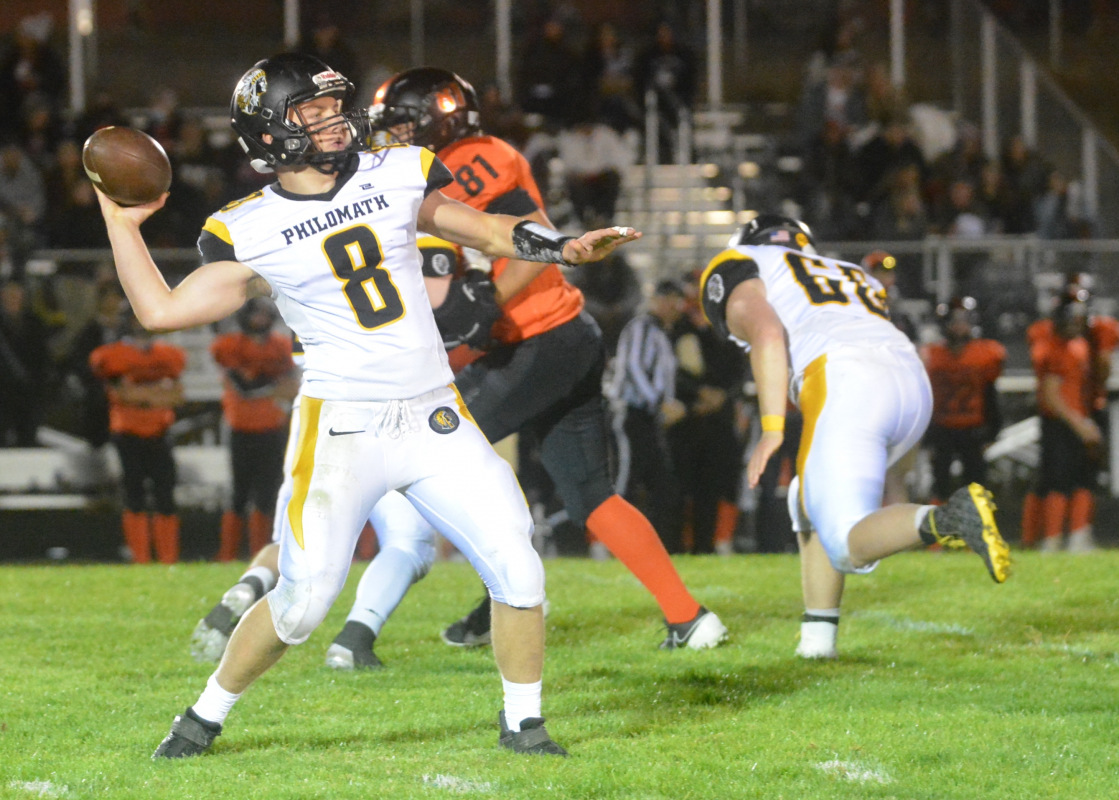 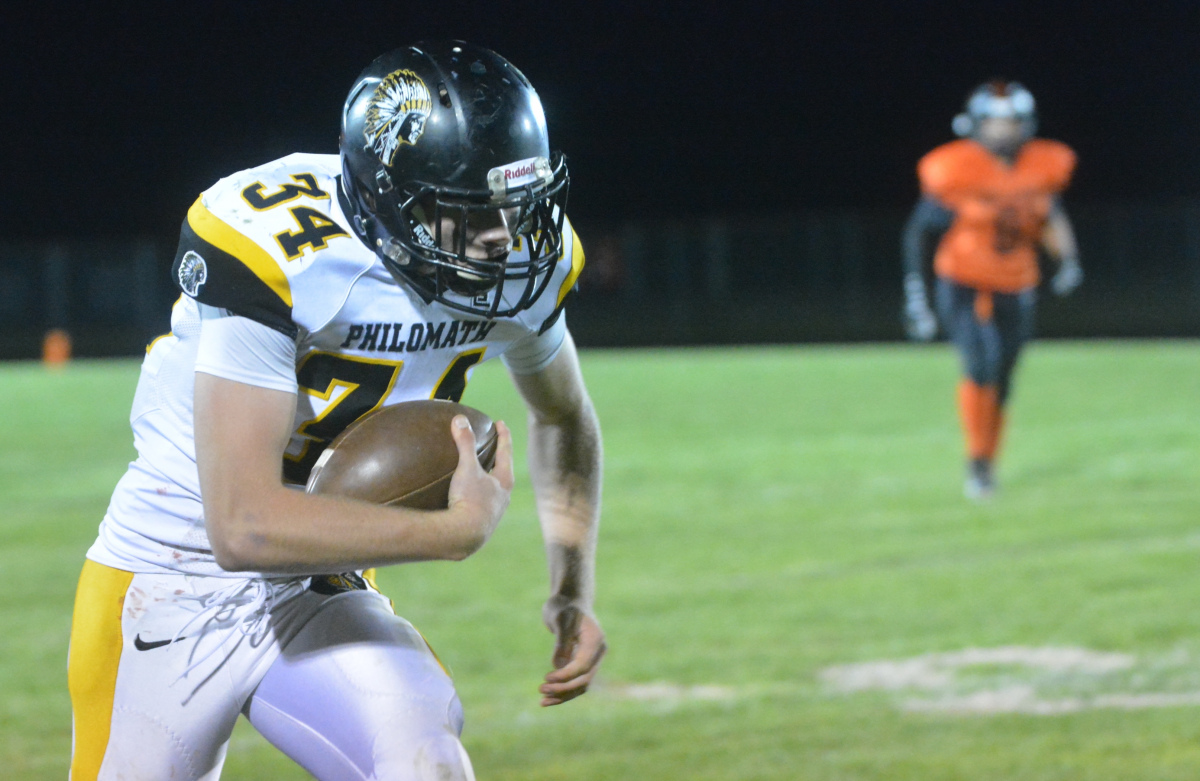 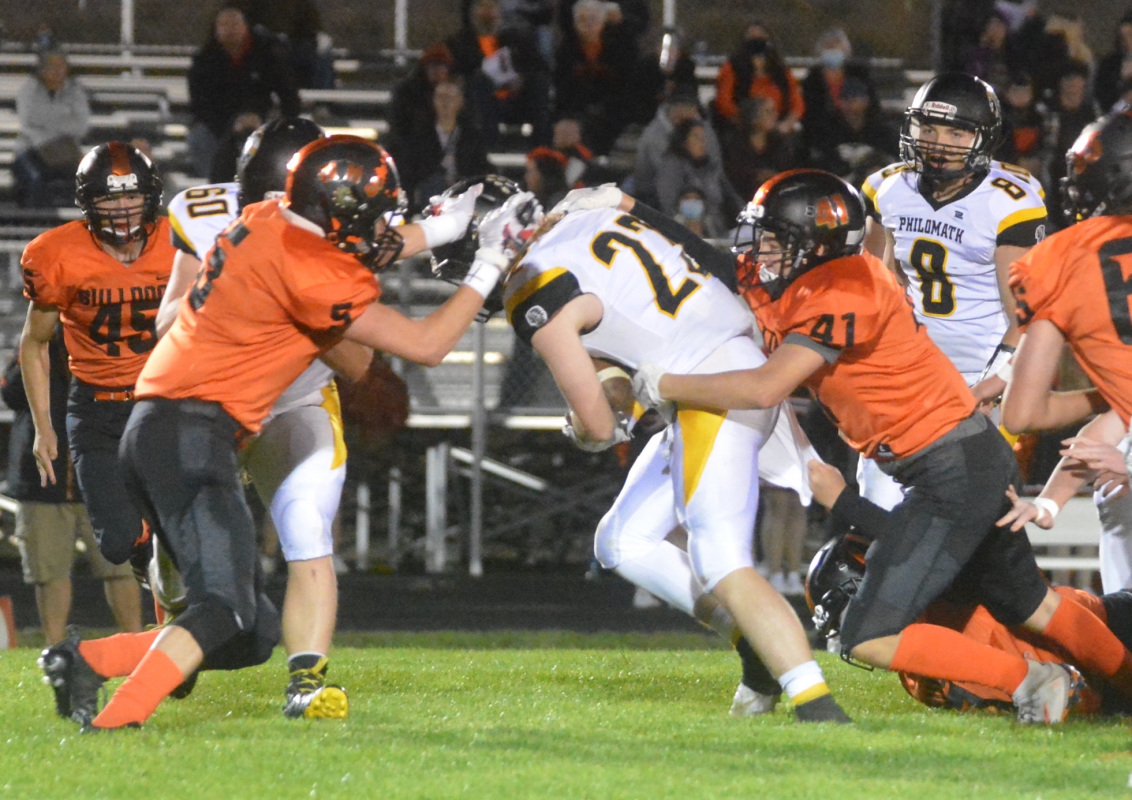 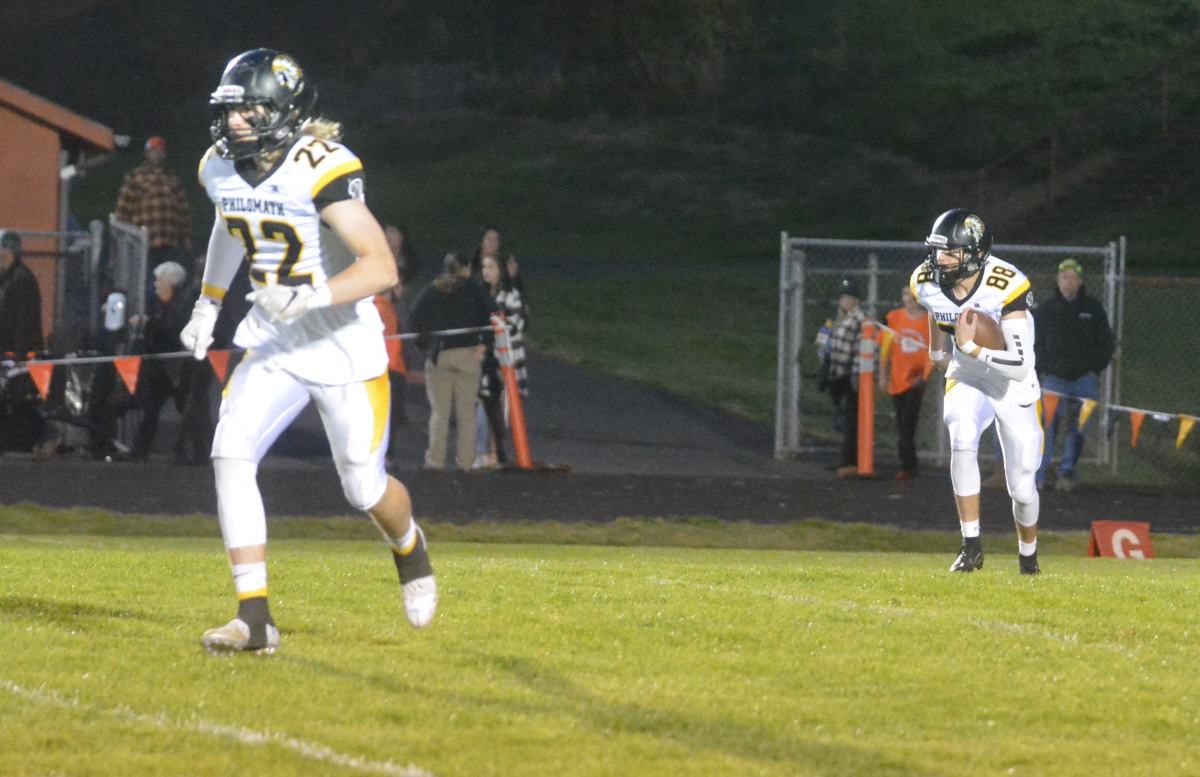 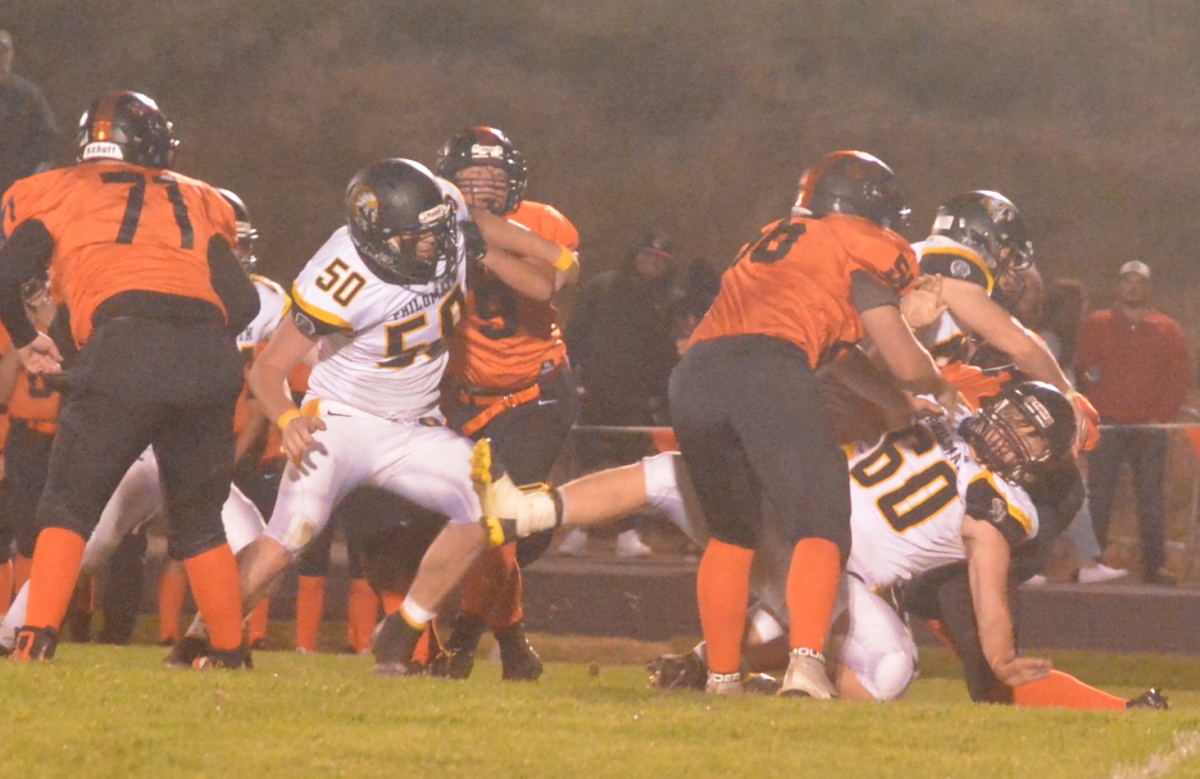 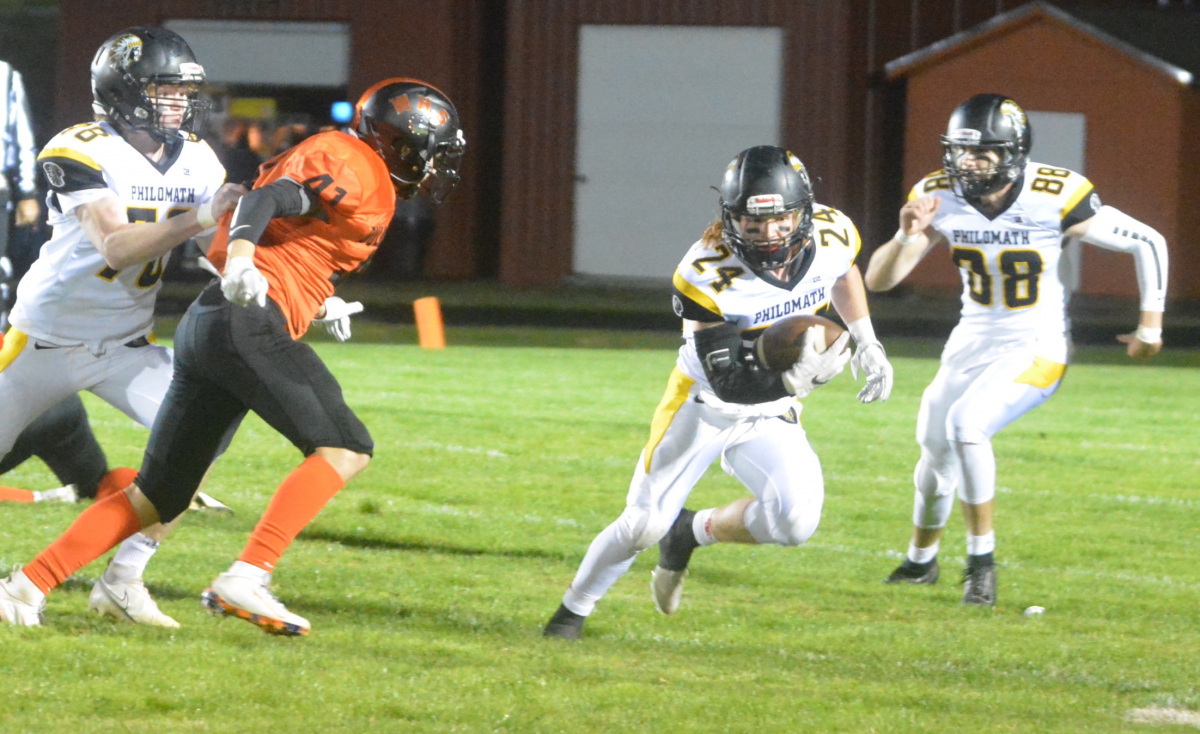 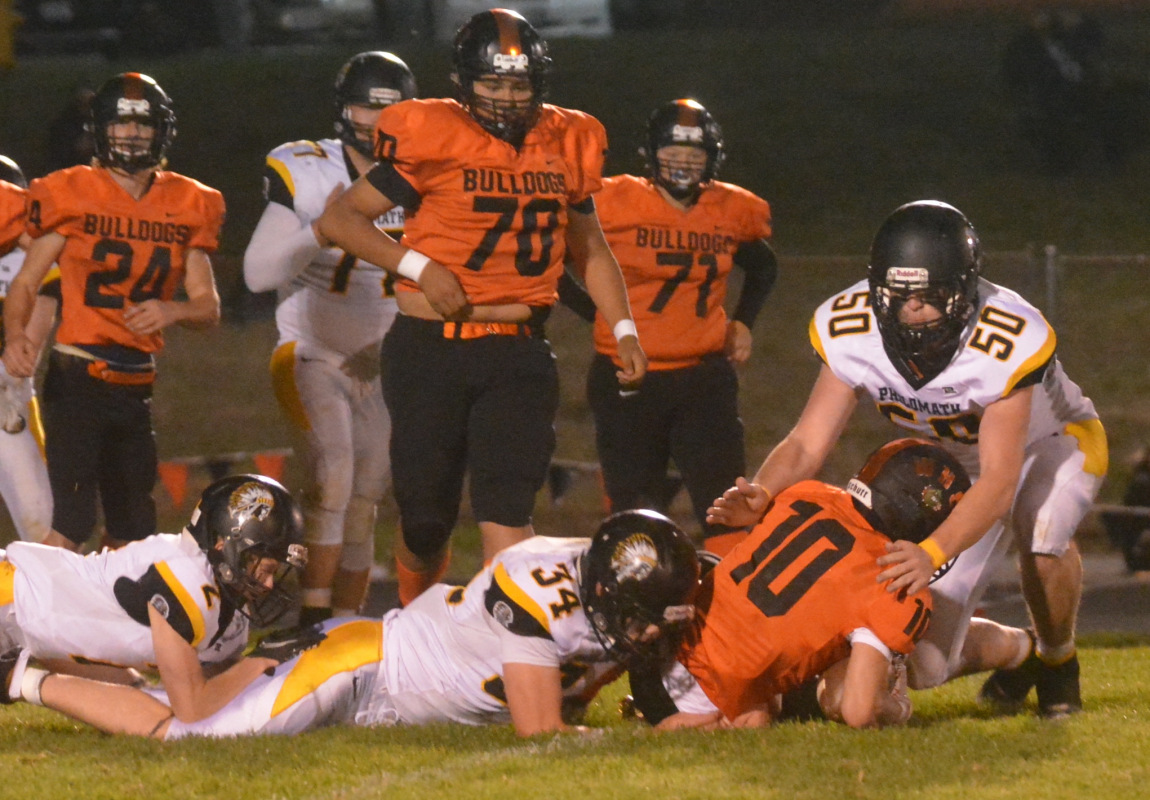 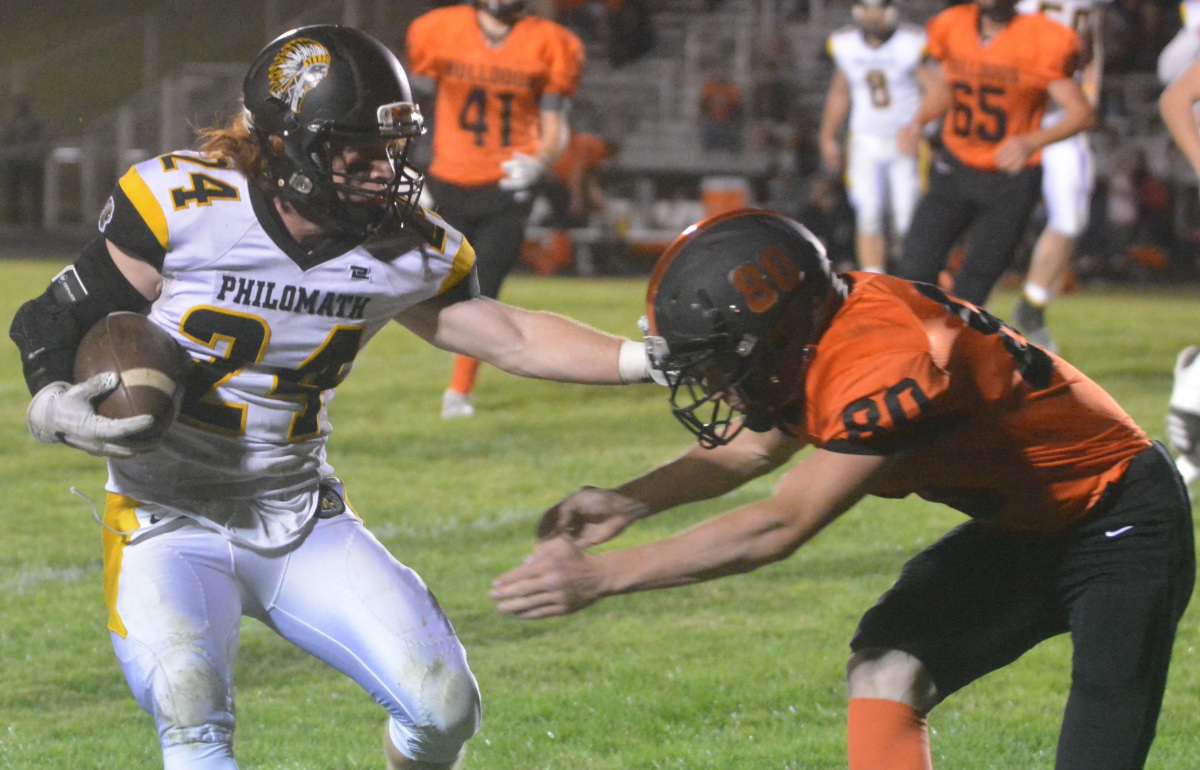 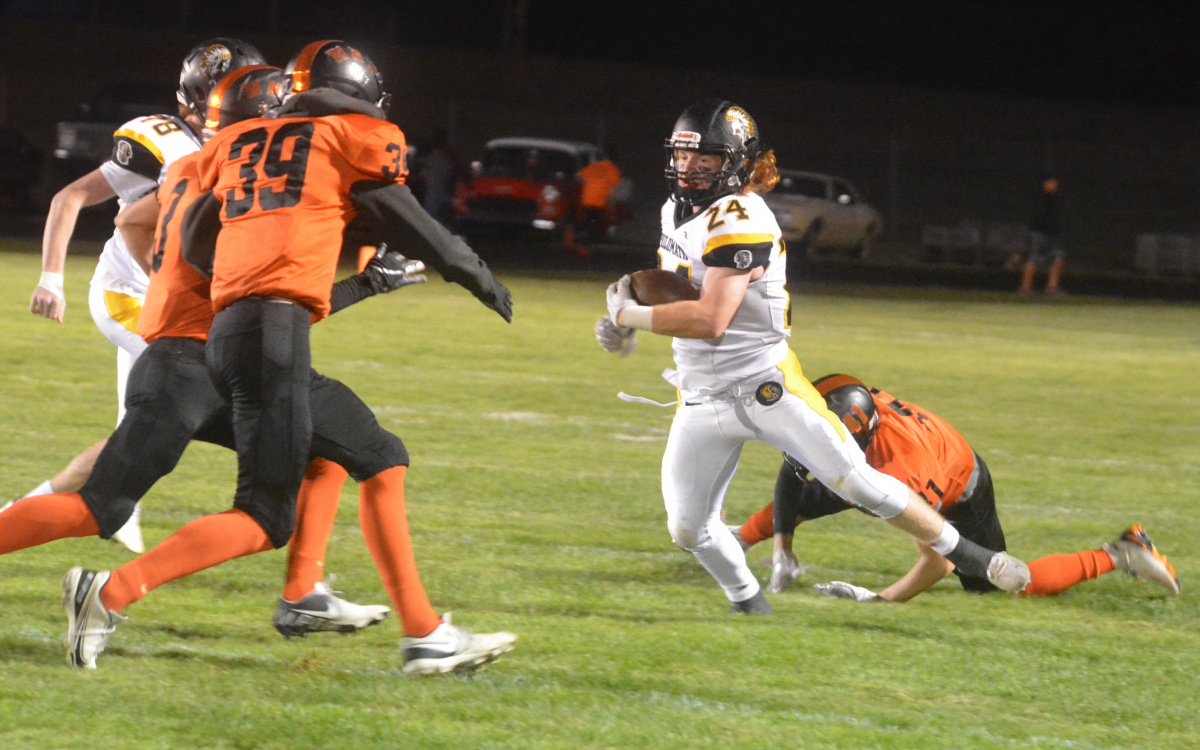 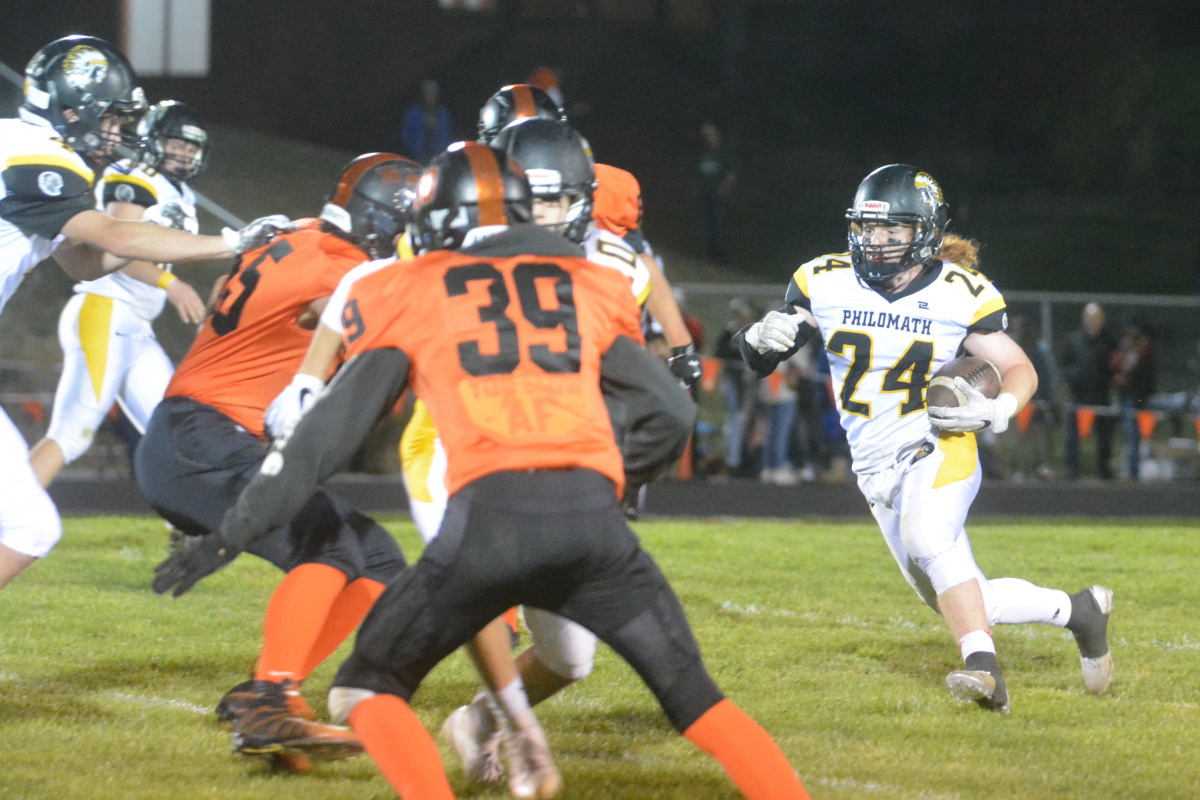 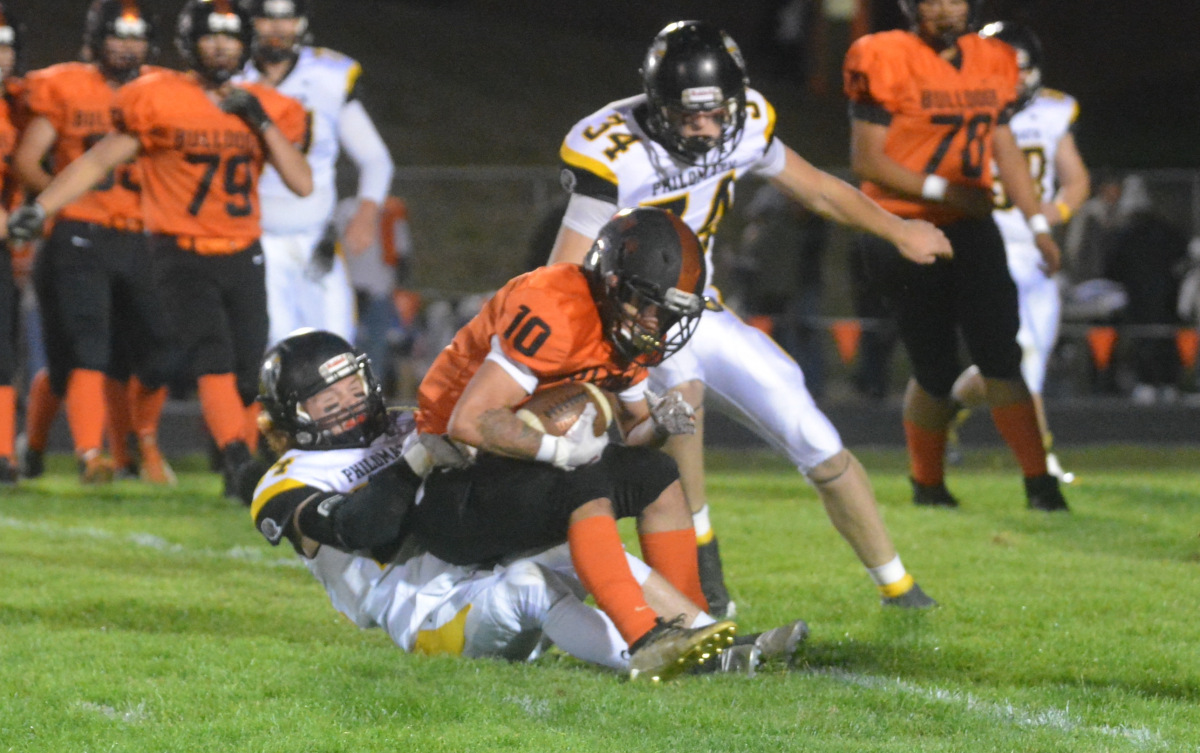 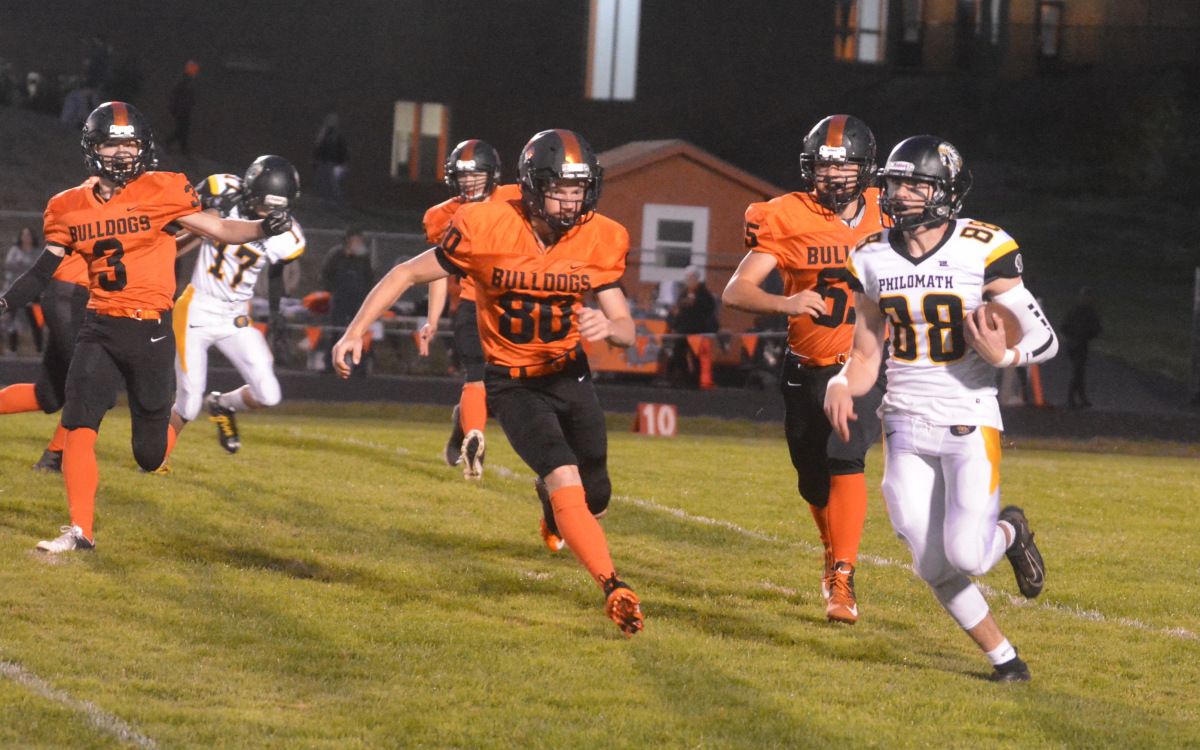 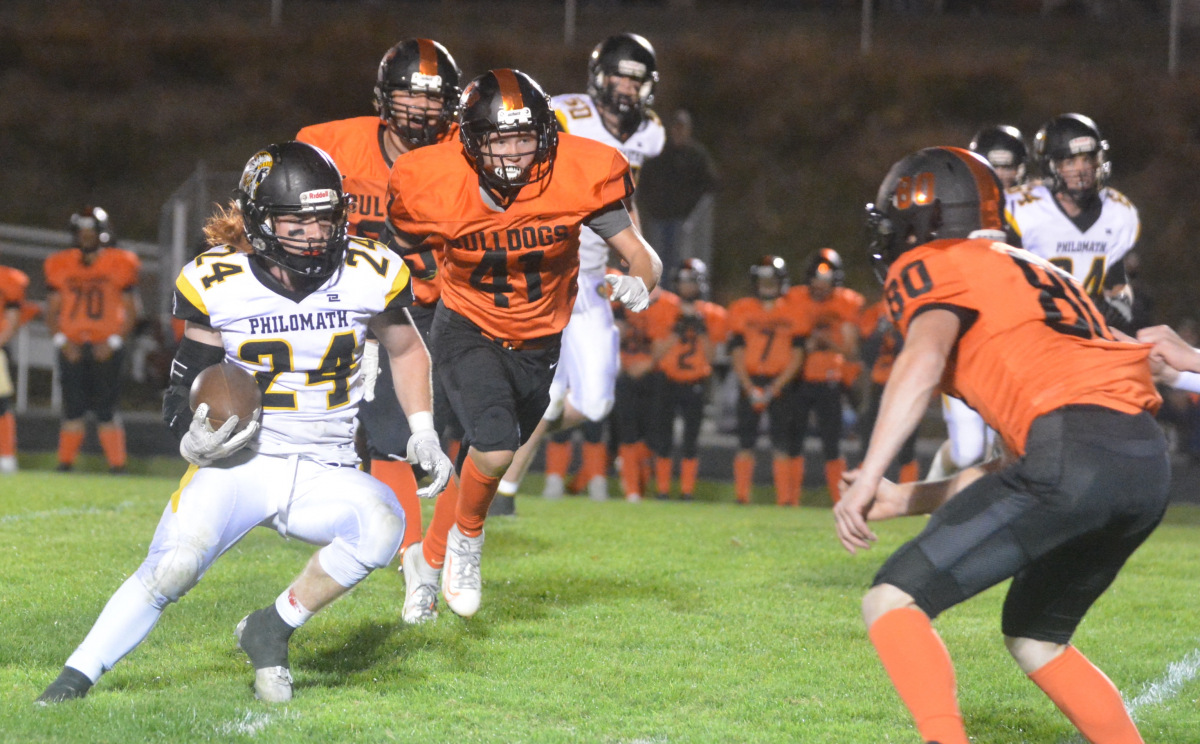 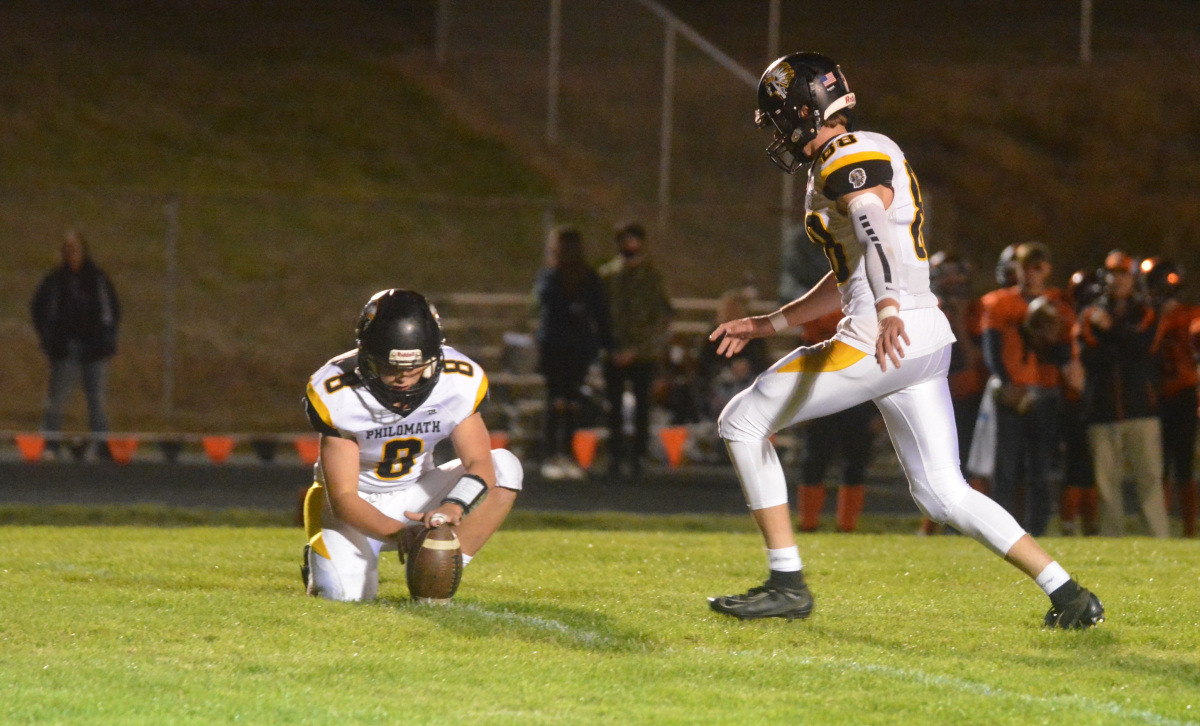 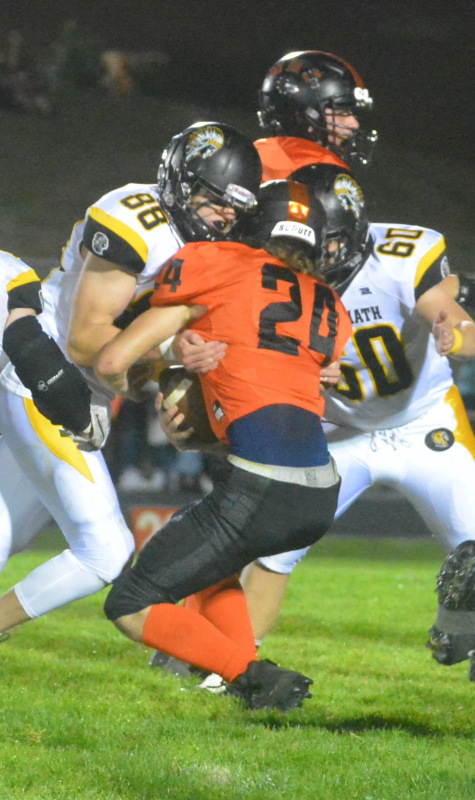 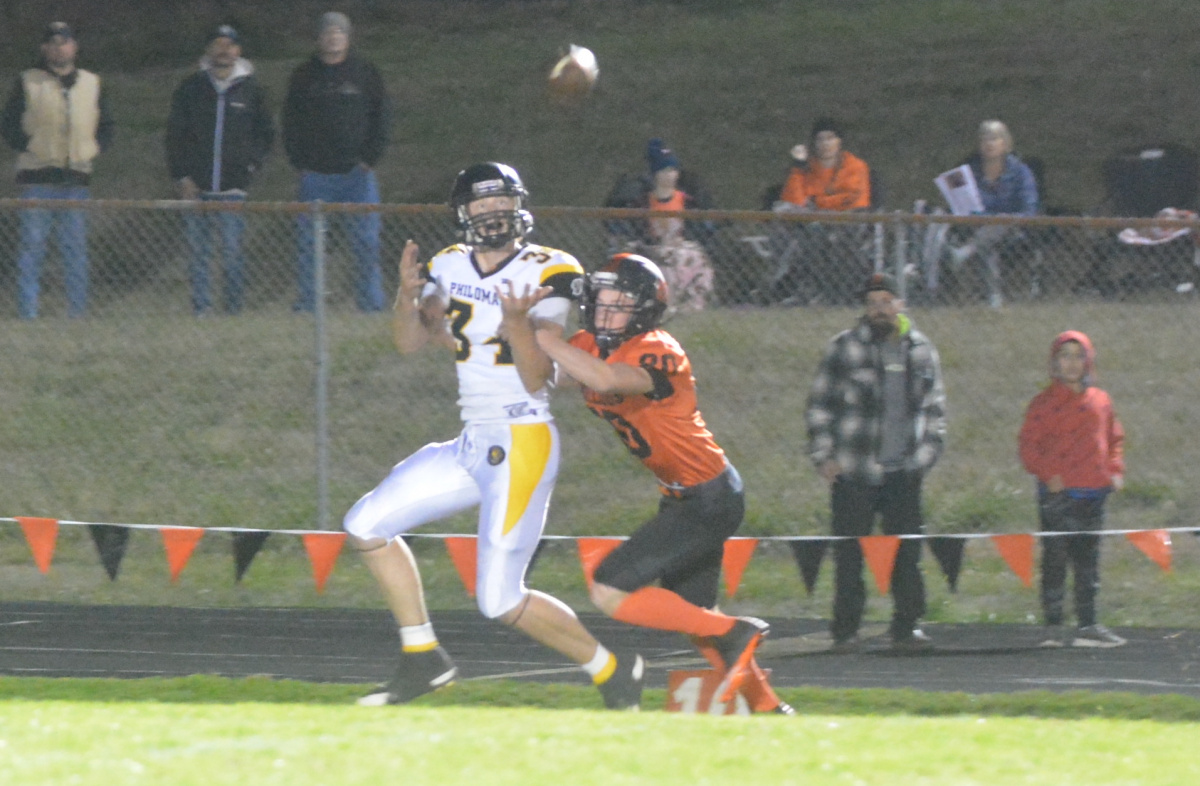 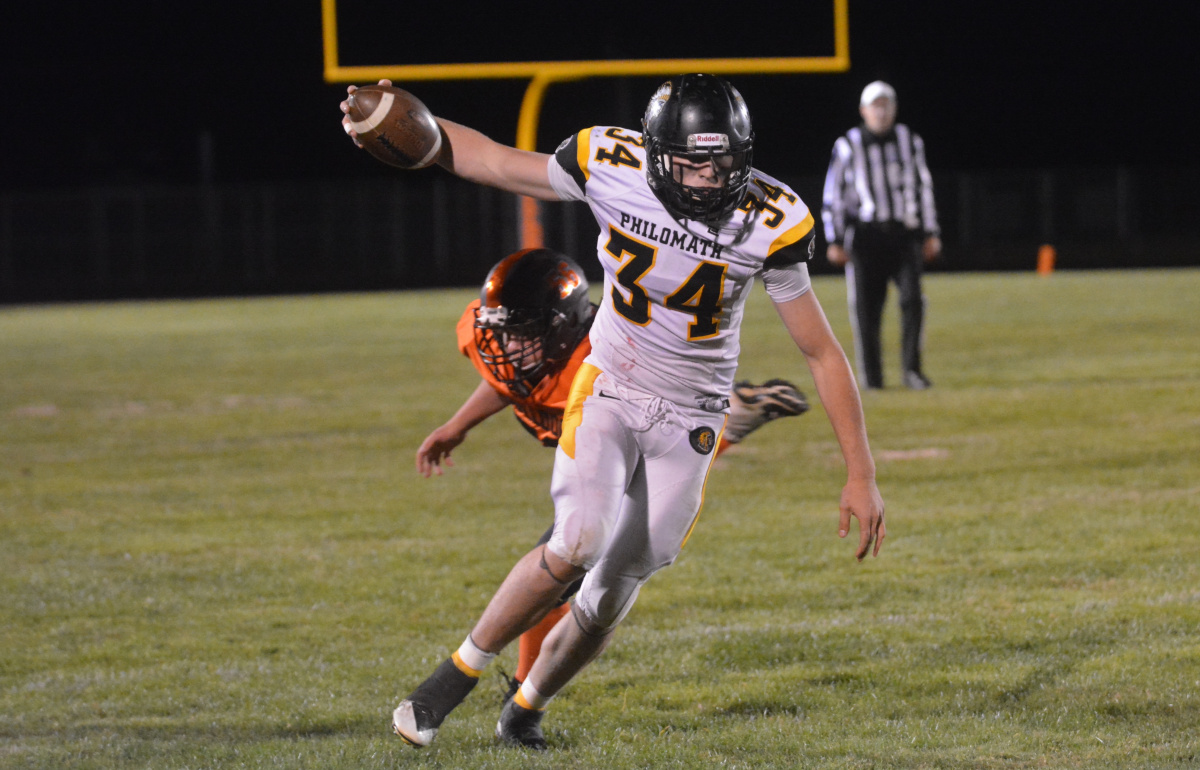 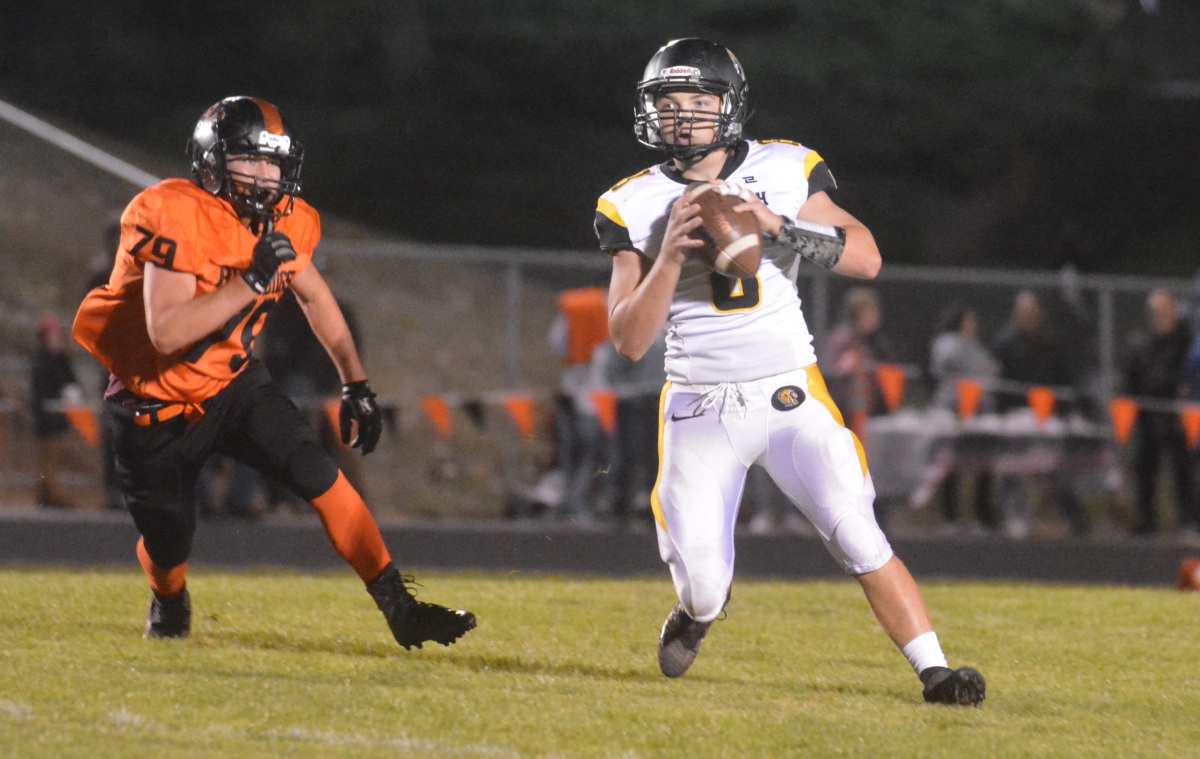 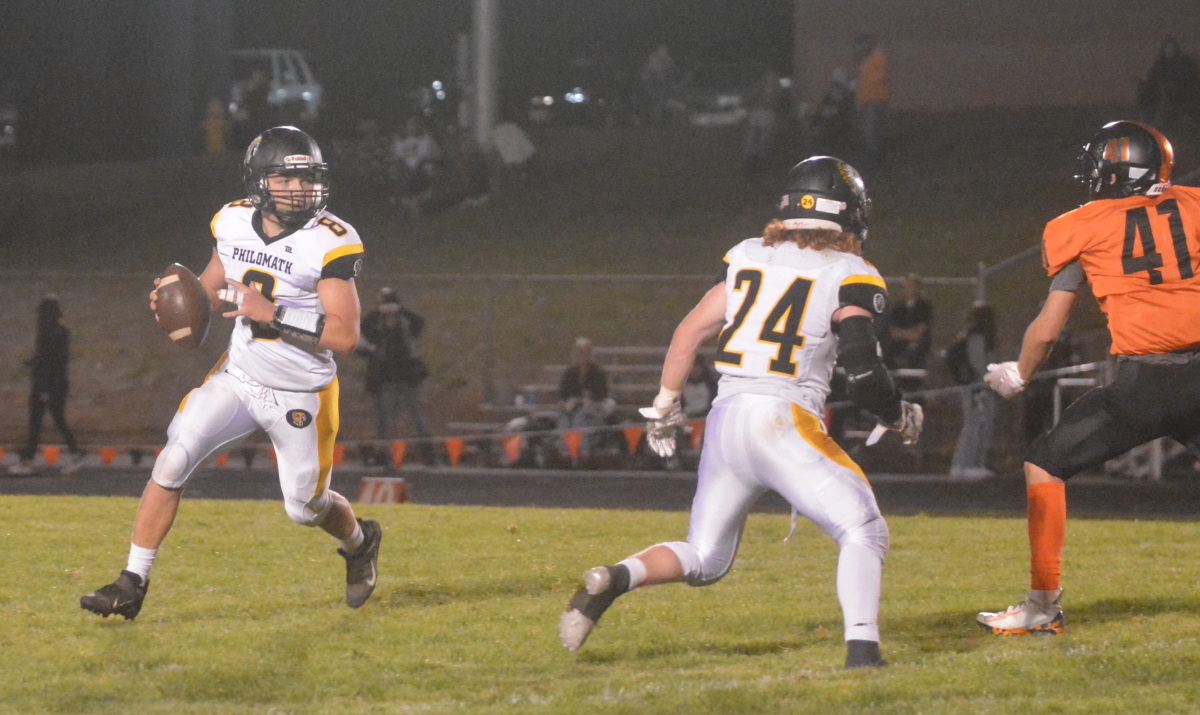 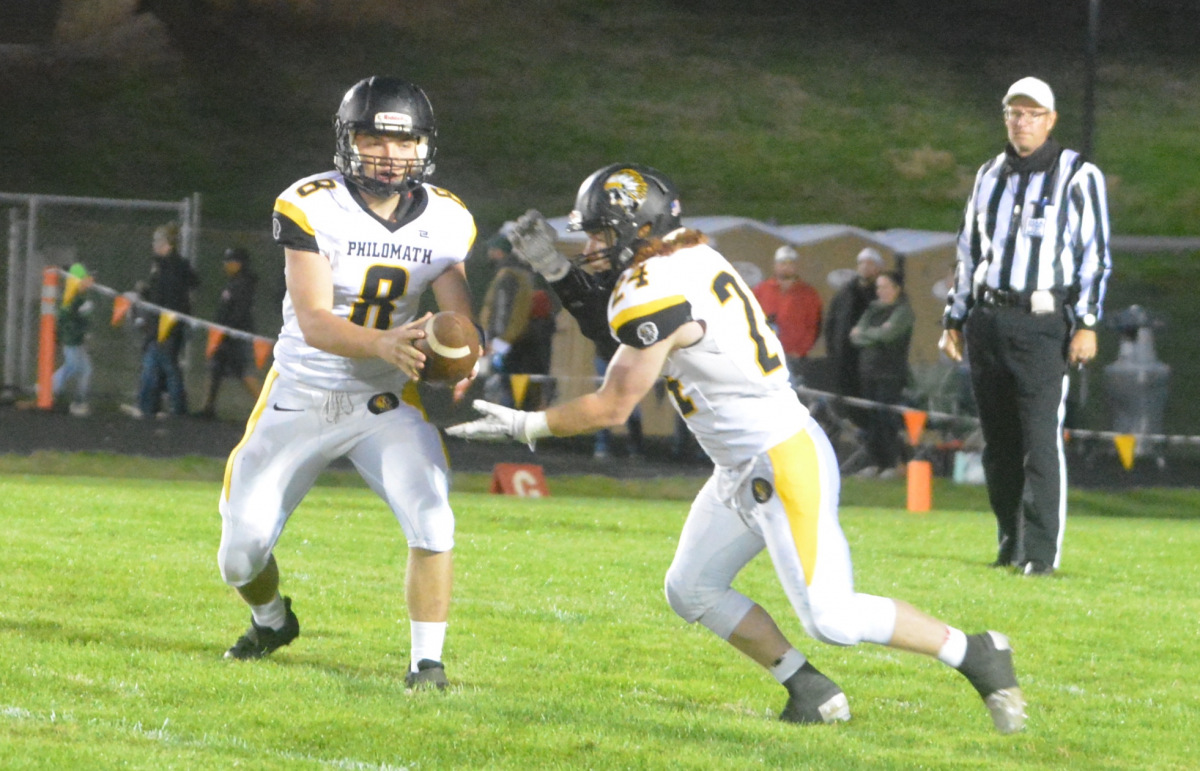 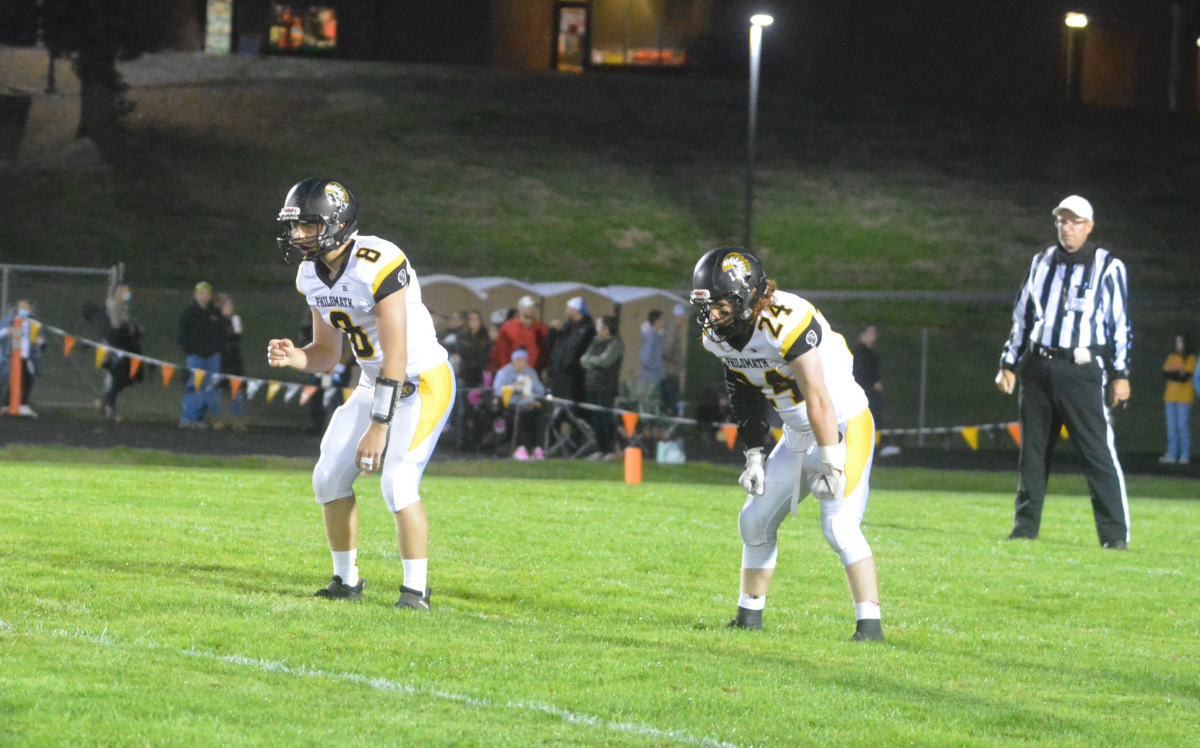 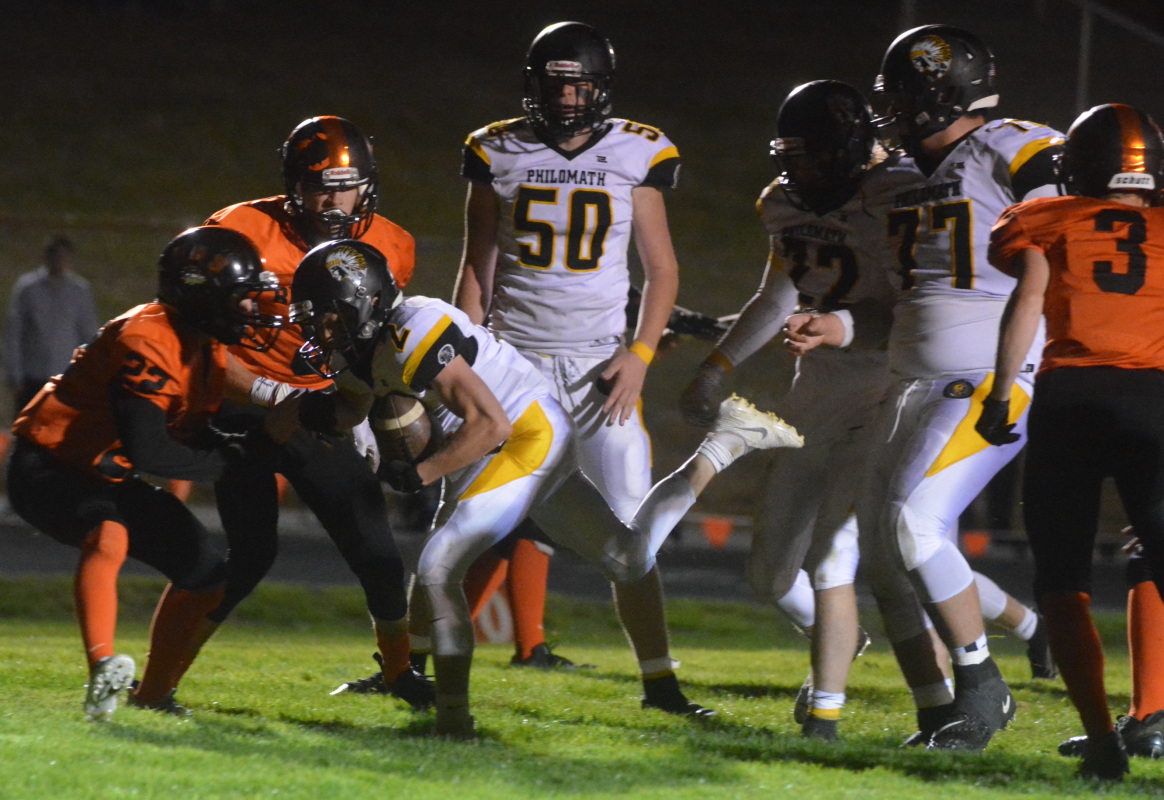 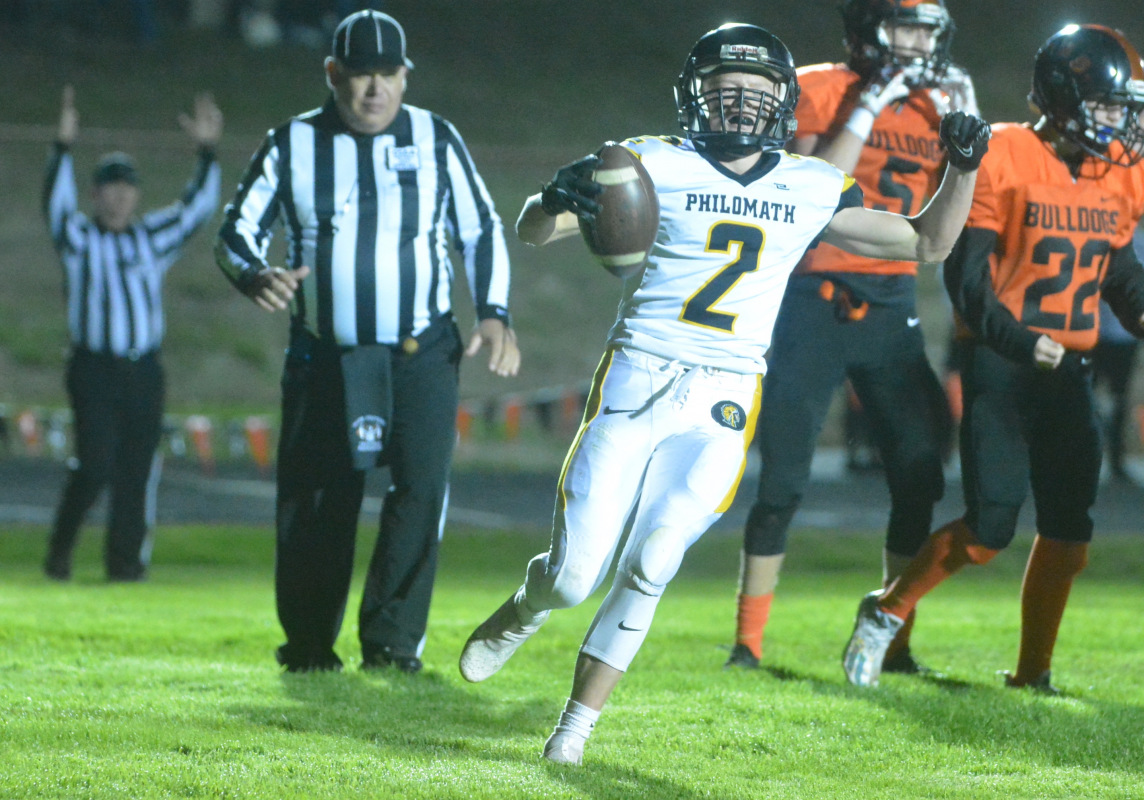 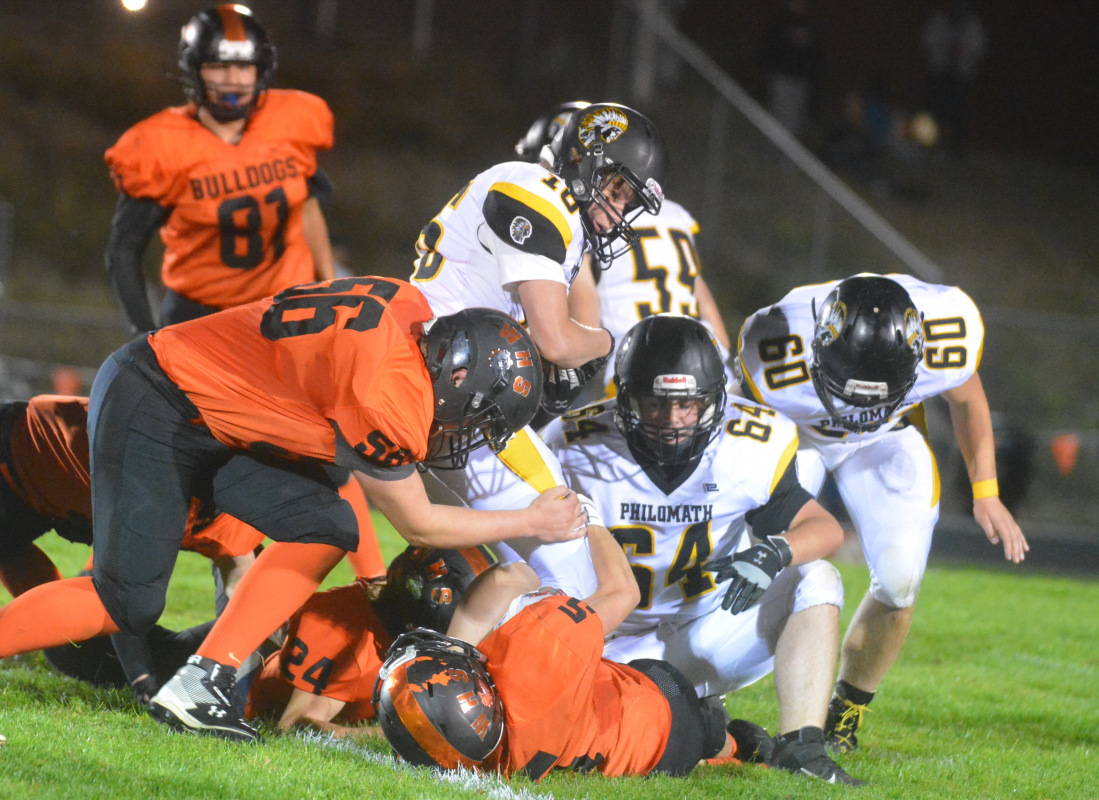 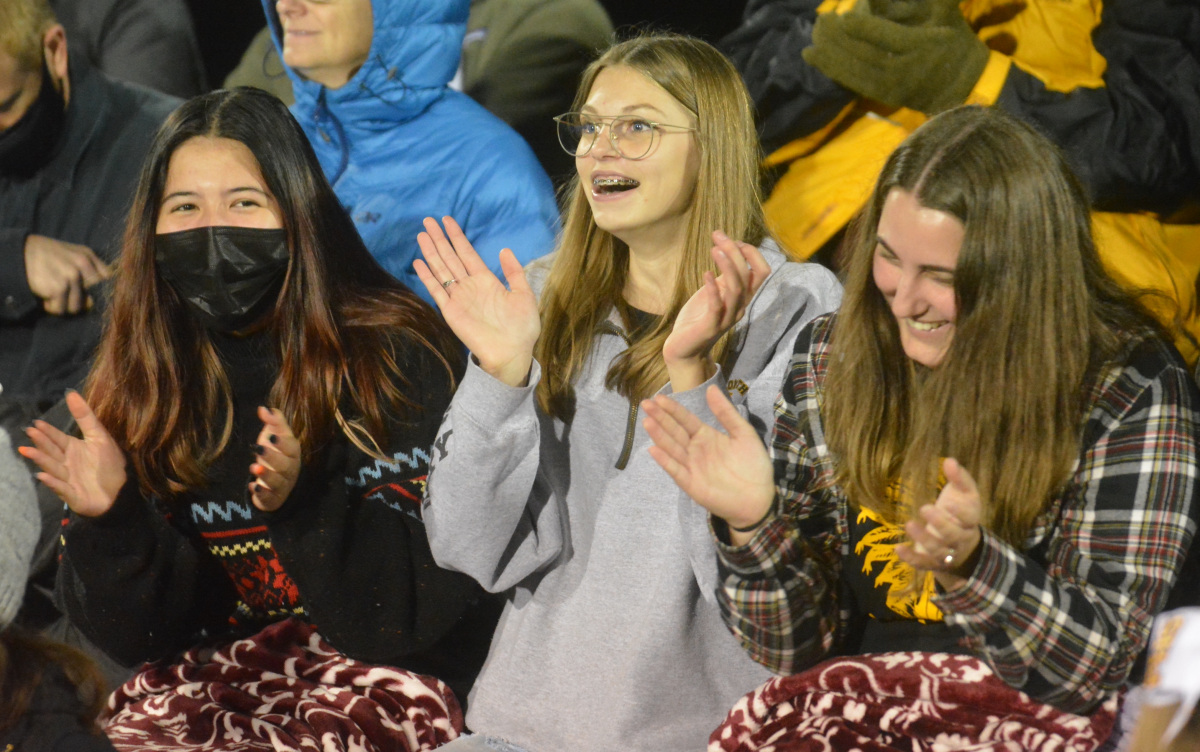