Philomath High pushed Class 4A’s top-ranked volleyball team to the limit in the state tournament’s semifinals on Friday night in Corvallis. The Warriors fought back from a 2-0 deficit to force a fifth set and kept fighting to the end but Sisters escaped to the championship match with the win, 25-21, 25-23, 23-25, 22-25 and 15-11.

“The interesting thing about these matches is you pour your heart into it and you do everything you can and not everything goes right,” PHS coach Denee Newton said. “But when you lose it, it feels worse than if you had just gotten killed because it was at your doorstep.”

Philomath’s late-season surge must’ve surprised a lot of folks that wouldn’t expect much out of a No. 13 seed. The Warriors finished fourth in the conference standings and ended the regular season with a .500 overall record. But Philomath tackled the challenge and swept three straight teams out of the postseason — all on the road and all over the state — in Hidden Valley in a play-in match and Mazama and Baker in the tournament’s first two rounds.

“We’ve worked so hard. I mean, anyone can see over the season how much better we’ve gotten,” Philomath senior Sage Kramer said. “We worked so hard in this game (vs. Sisters) and of course it sucks coming out and losing that but it always makes it a little bit less bad when you know that everyone is putting everything into the game and that you played your best. You’ve done everything you can do.”

Then she added, “But it still hurts.”

Newton said she was proud of the team’s performance against Sisters.

“I was hoping for these seniors to grab a state title,” she said. “I really think that they have that in them, you know. … I just think that they did everything they could do to say they played a great match and I want them to be proud of that and to remember that this is what it feels like to put it all out there.”

The Outlaws (22-3) will meet another Oregon West Conference team in Cascade (22-4) for the state title at 7 p.m. Saturday on the court at Corvallis High School. Earlier in the day at 12:30 p.m., Philomath (12-10) will battle third-seeded Valley Catholic (19-6) for the third-place trophy.

Sisters, who lost to Philomath at the state tournament two years ago, took the first two sets but it wasn’t easy. The two teams put together scoring streaks against one another and it was tied 15-15 well into the first set.

The Outlaws took a slight lead on a couple of Philomath hits that missed and a block in the middle. The Warriors fought to within 20-19 only to see the Outlaws reel off four straight to reach set point. A Kramer kill delayed the outcome but Sisters took it on a Gracie Vohs kill.

In the second set, Sisters stormed out to a 7-1 lead but the Warriors rallied back to tie it at 11 and then take a 14-11 lead. Philomath’s run amounted to nine straight points with senior Taylor Roe at the service line. Senior Ashlynn Barron had a couple of effective hits and junior Abigail Brown came up with a block and kill on points 10 and 12. Sophomore Clara Stanley placed a ball inside the back corner on the 13th point. Roe’s serving was effective and included an ace on point 11.

The two teams battled back and forth from that point on with a few lead changes. Philomath tied the score 22-22 on a Brown hit that Sisters blocked out of bounds. The Outlaws scored two straight, however, for a 24-22 lead. Philomath got one back on a Barron kill but Sisters ended it by blocking a Kramer hit.

“It was a match of ups and downs,” Kramer said. “We would get streaks of playing well and we would get up and then we’d get down — it was like constantly like that.”

Down by two sets against the No. 1 seed, that’s not an easy mountain to climb. But the Warriors didn’t roll over.

“At that point, we had to really fight,” Kramer said. “I think it shows a lot about our mental game — how we were able to fight back in the next two sets against Sisters, the No. 1-ranked team in the state right now and a team that beat us twice this season already. I think that speaks volumes for how far our team has come and how much our mental toughness has grown over the season … and since last year.”

Newton said she felt her team would respond.

“I just knew we were going to go five sets after those two losses,” Newton said. “It’s not really my intuition so much, it’s just the pattern that they have; you can sense it in their energy. I think in the first two sets, Sage was processing … she needed to kind of work some stuff out in her head and we needed her to come back.”

Kramer and everybody else on the floor started to find a rhythm and discovered how to hang on to the lead and close out the set to tie the match at 2-2.

In the third set, Philomath got itself into a hole early and had to claw its way out. Things weren’t looking good at 16-11 following the latest kill by Vohs. Kramer got a sideout with a kill and Brown followed with an effective hit to cut the deficit to three. Sisters responded with a Vohs hit for a 17-13 advantage.

That advantage didn’t last long with Philomath scoring four straight points to tie it. Kramer and Barron both had kills during that stretch and Brown scored with a hit down the line. Sisters regrouped and regained the lead at 20-18.

Again, Philomath came back and took a 21-20 lead after scoring on a Stanley kill, a well-placed ball by Barron and on a Sisters “carry” violation while trying to handle a Reagan Larson hit.

The two teams continued to battle with the Outlaws trying to close out the win. Sisters led 23-22 but then lost points on a serve and a Vohs hit into the net. Leading 24-23, Philomath took the set with Stanley serving and on a Kramer hit from the back row.

Philomath carried the momentum over into the fourth set and got off to a better start. However, Sisters took its first lead at 10-9 and eventually built a 17-13 lead. After a timeout, Philomath got the sideout on a Sisters serve that landed long and then scored five straight for a 19-17 lead. Roe served through that stretch with a highlight on point 15 when Stanley and Brown scored on a stuff block. Roe had an ace on the 18th point and Brown blocked Bailey Robertson on the 19th point.

The two teams continued to play close the rest of the way but Philomath executed well late. Stanley and Kramer had a block for a 23-21 lead, Kramer’s kill made it 24-22 and the set ended on another Kramer hit that went out of bounds off a Sisters block.

“You have to do the little things right when you play against them,” Kramer said, who then went into detail about a strategy of hitting toward the line on the setter side. “So you’re trying to hit that spot a lot and obviously, you’re working really hard to make your serve-receives good so that we could execute hits and make it hard on them.” 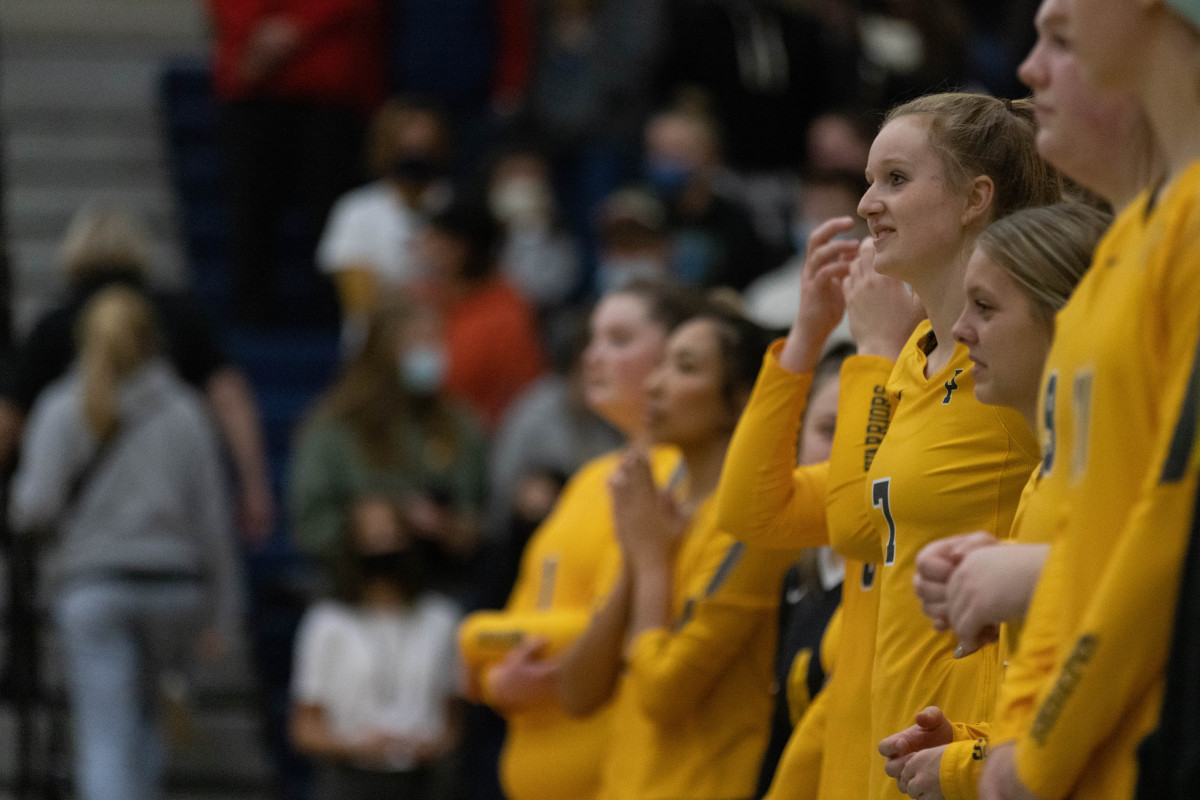 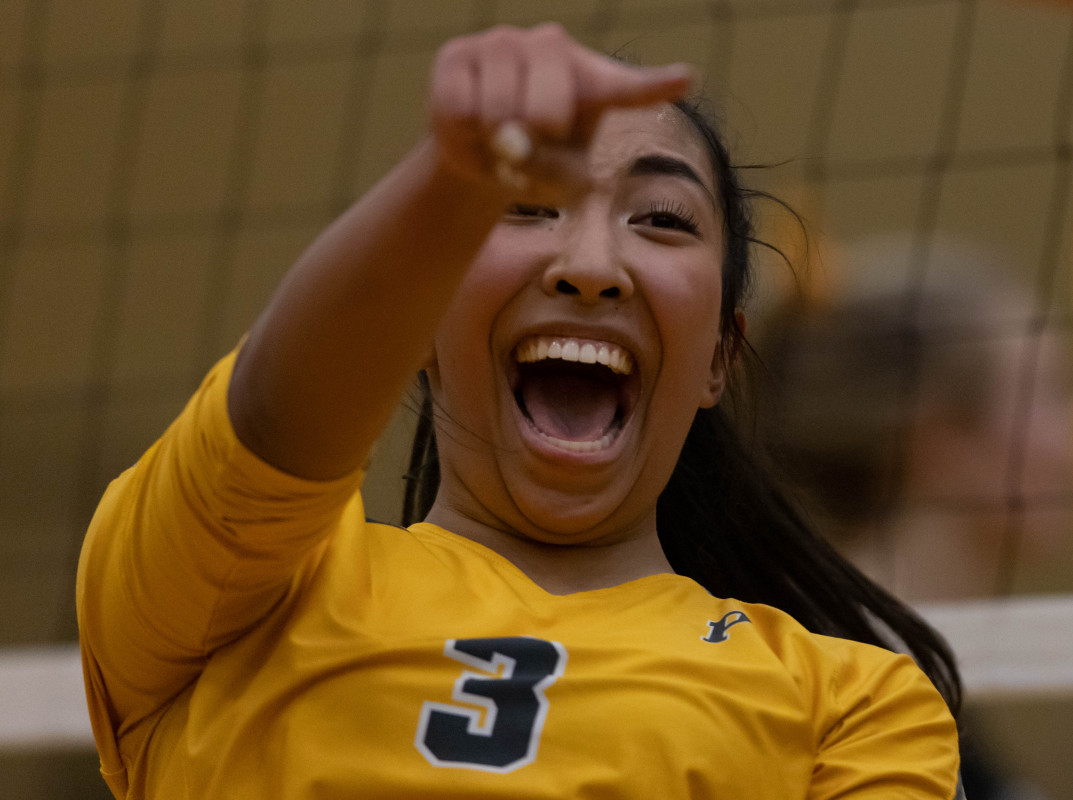 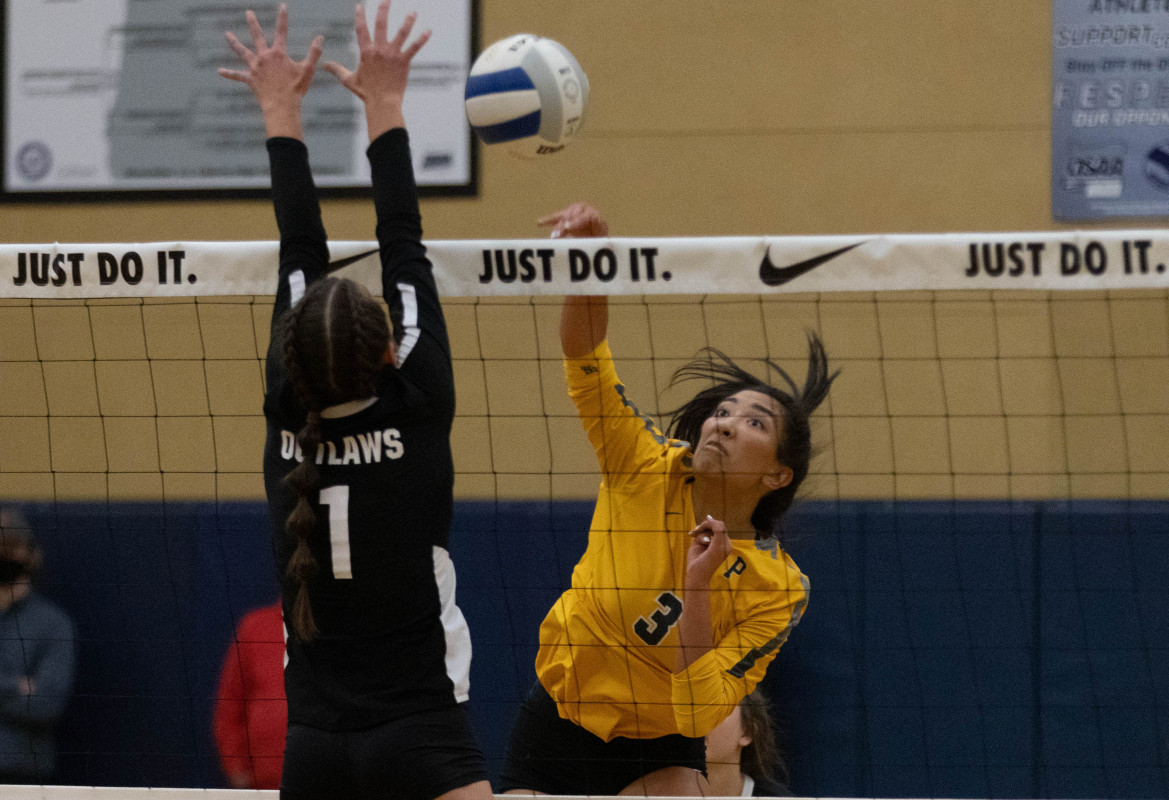 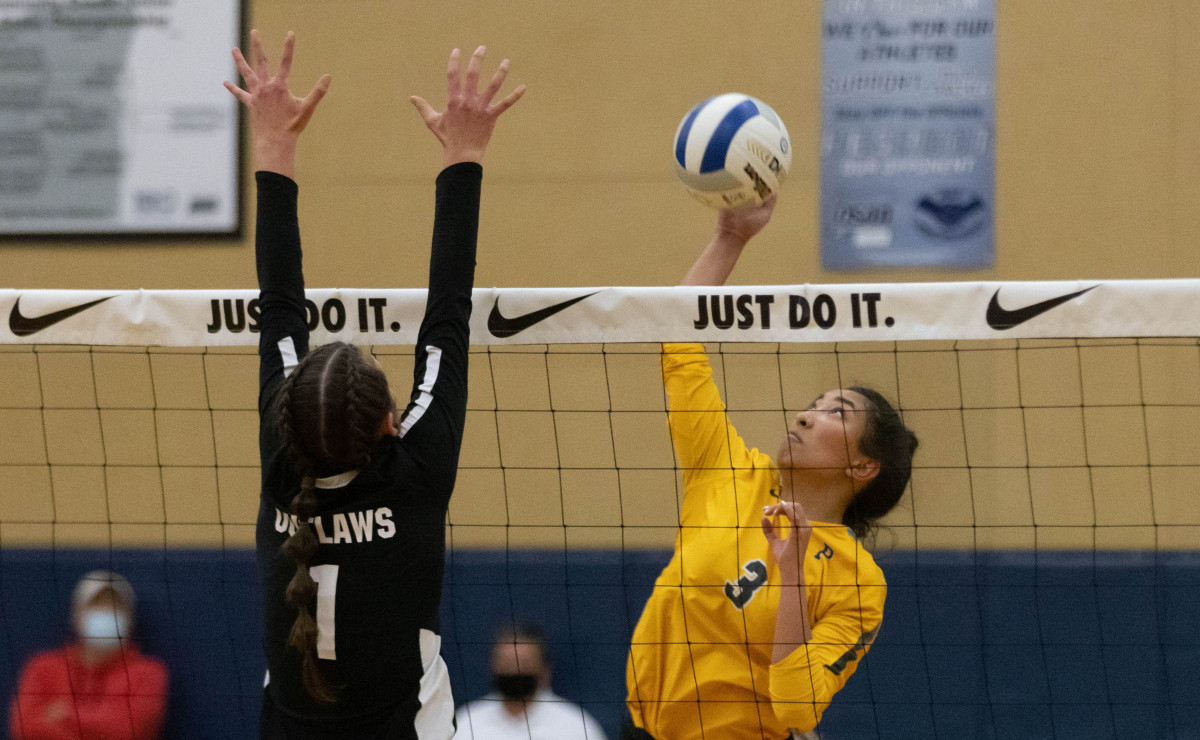 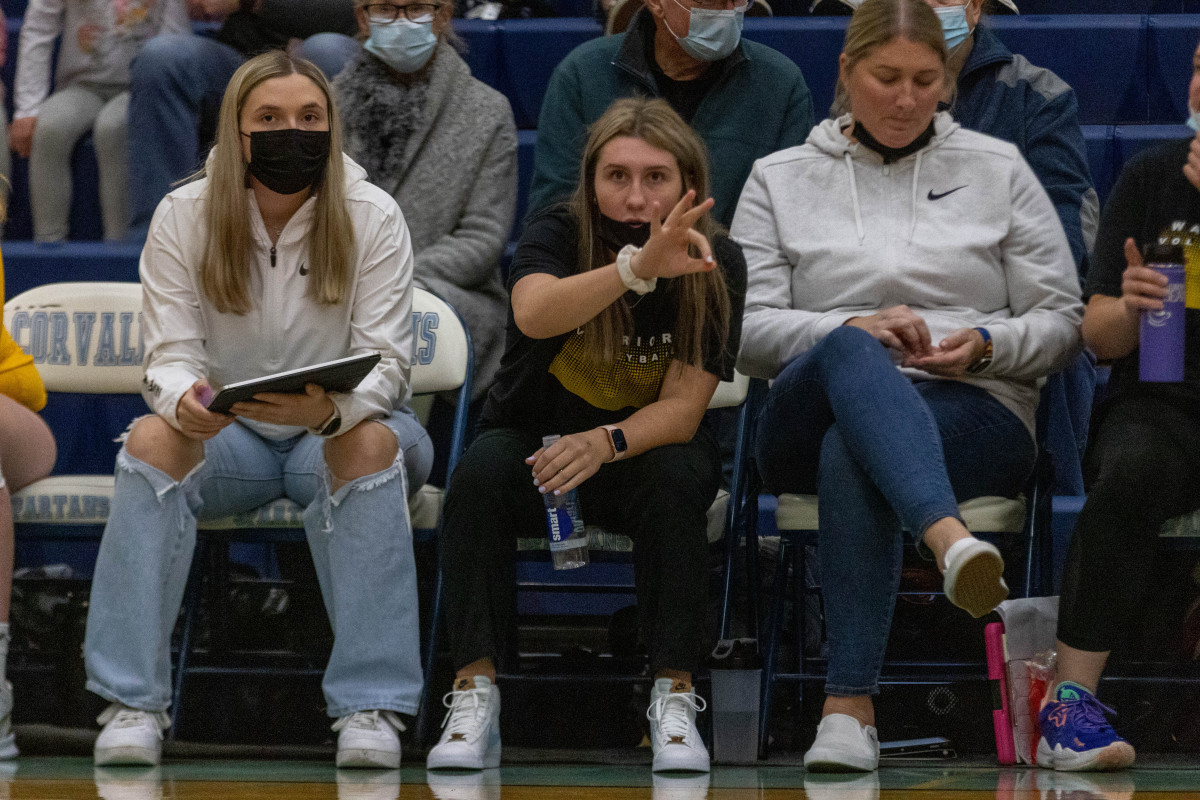 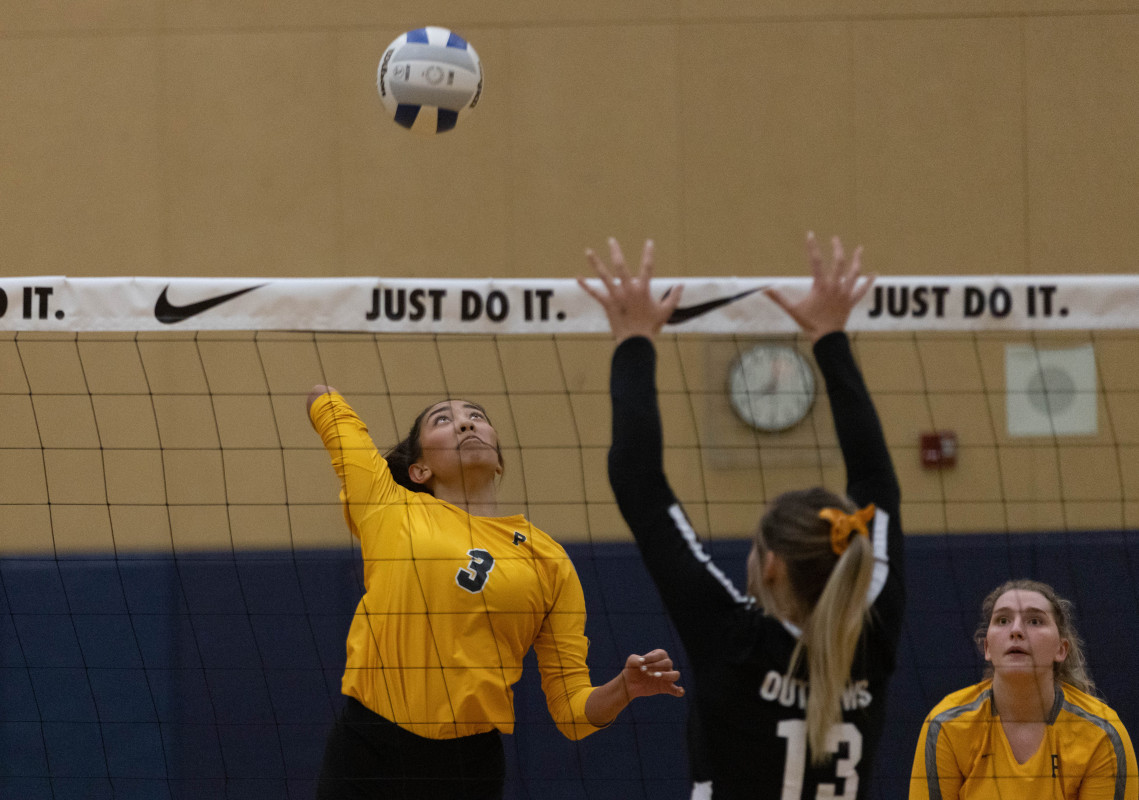 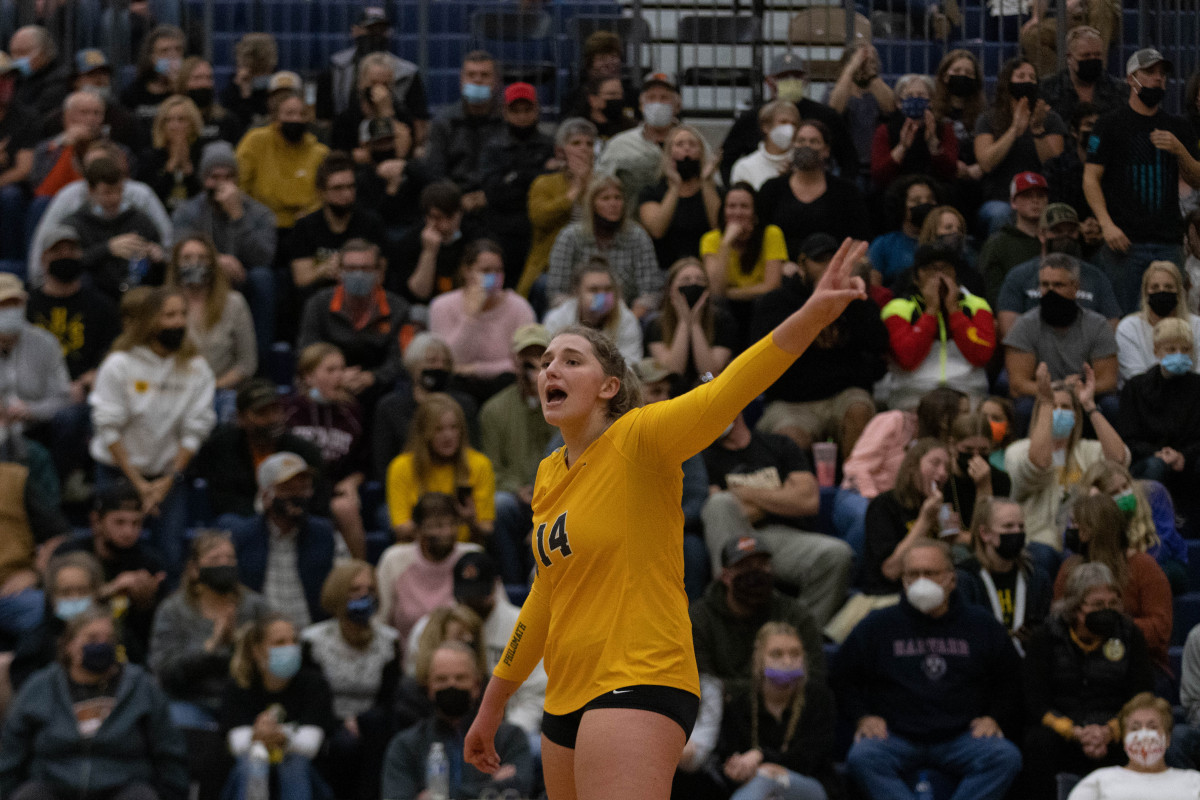 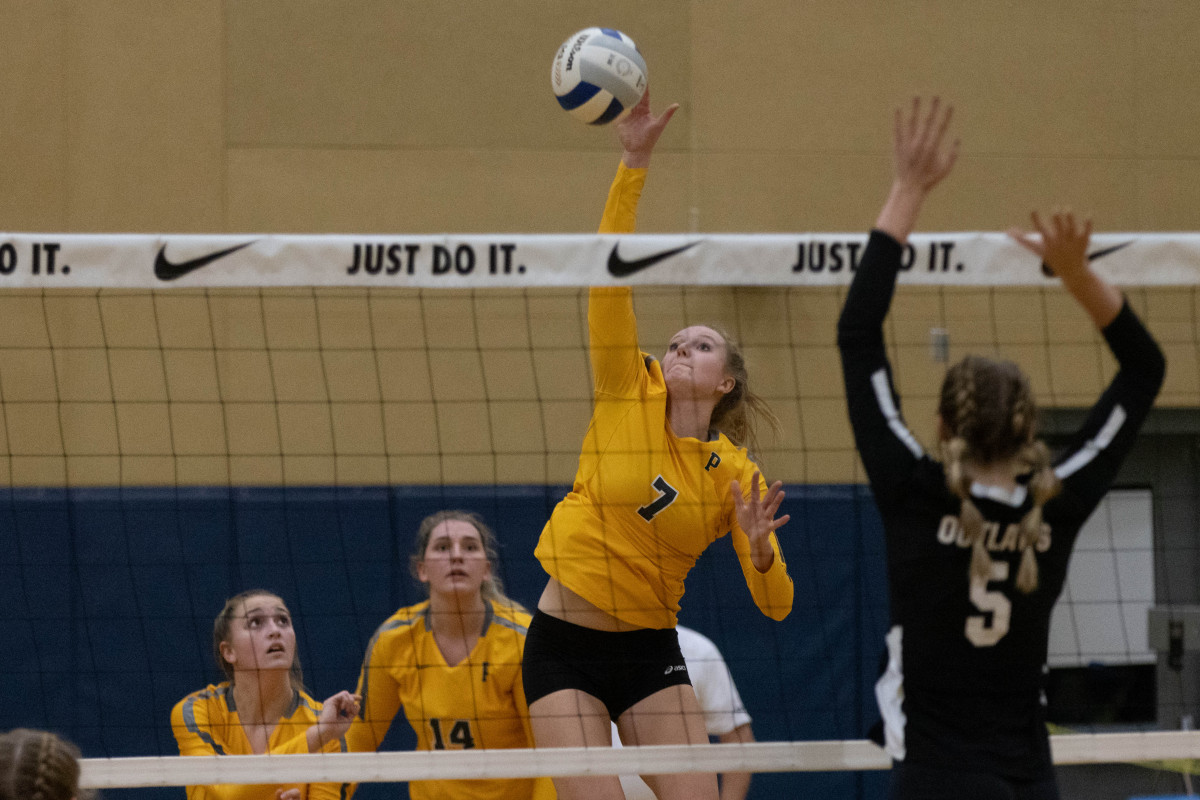 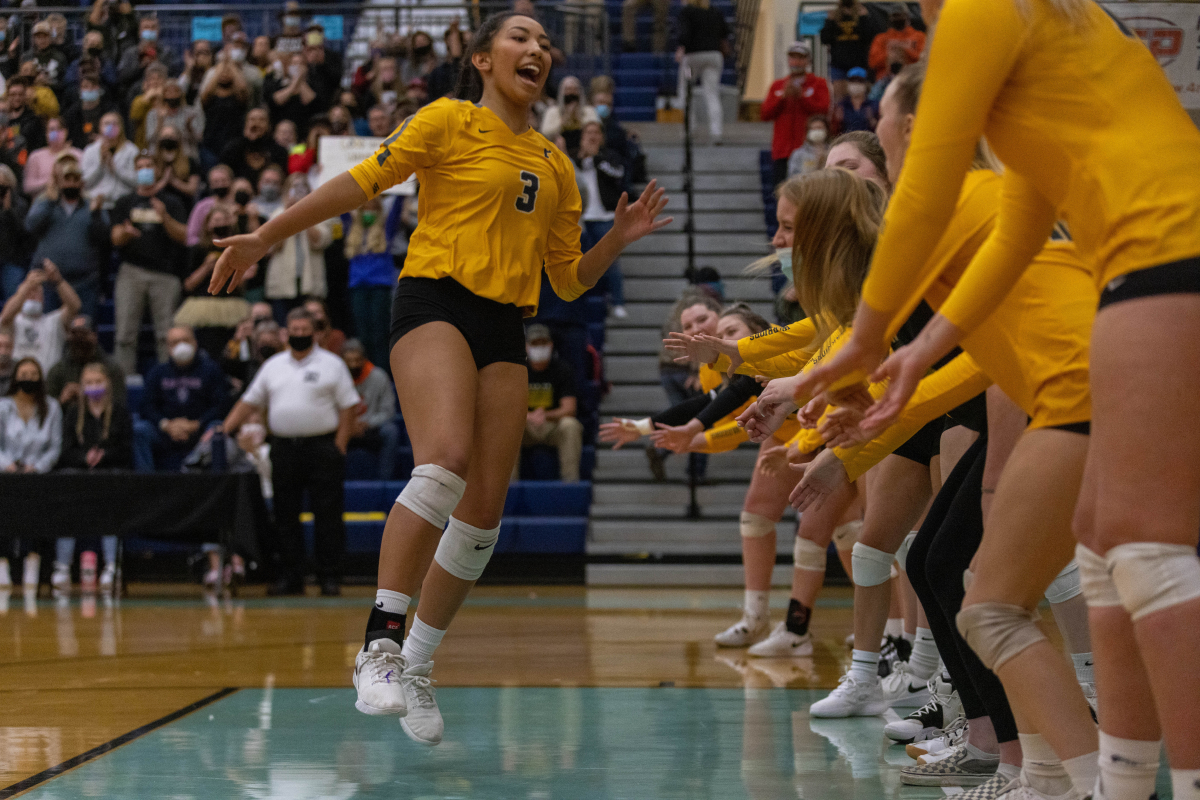 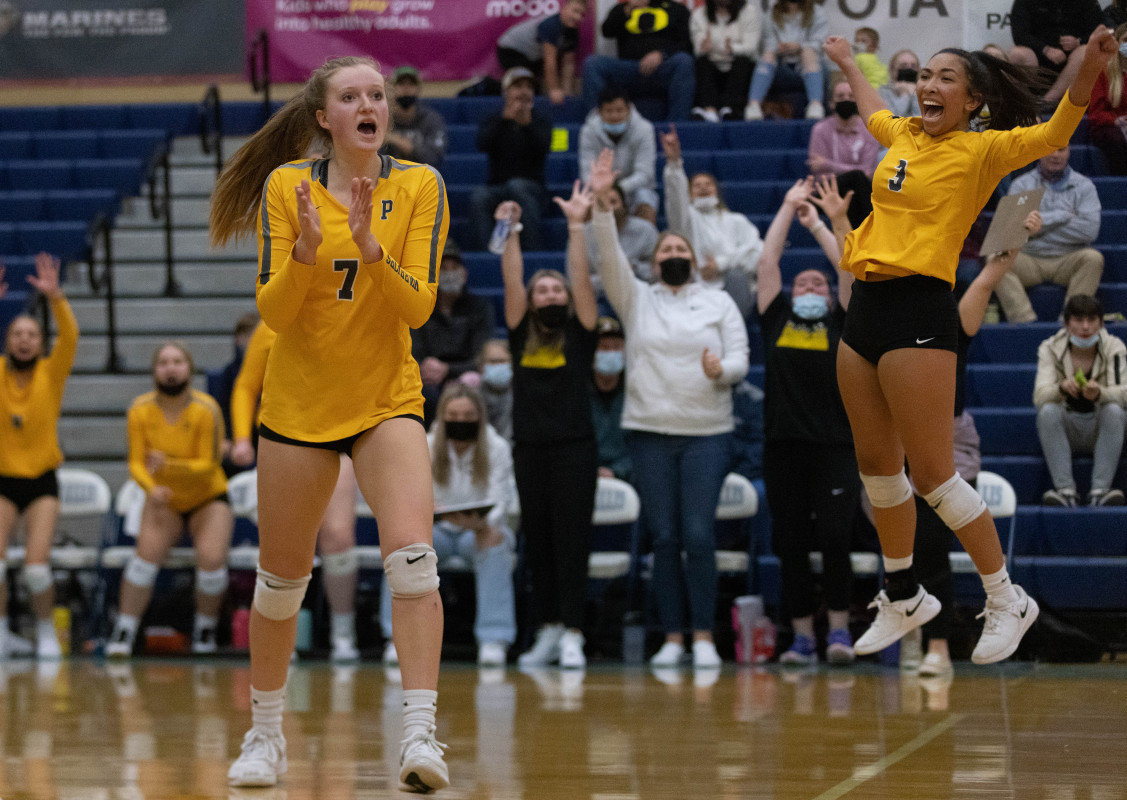 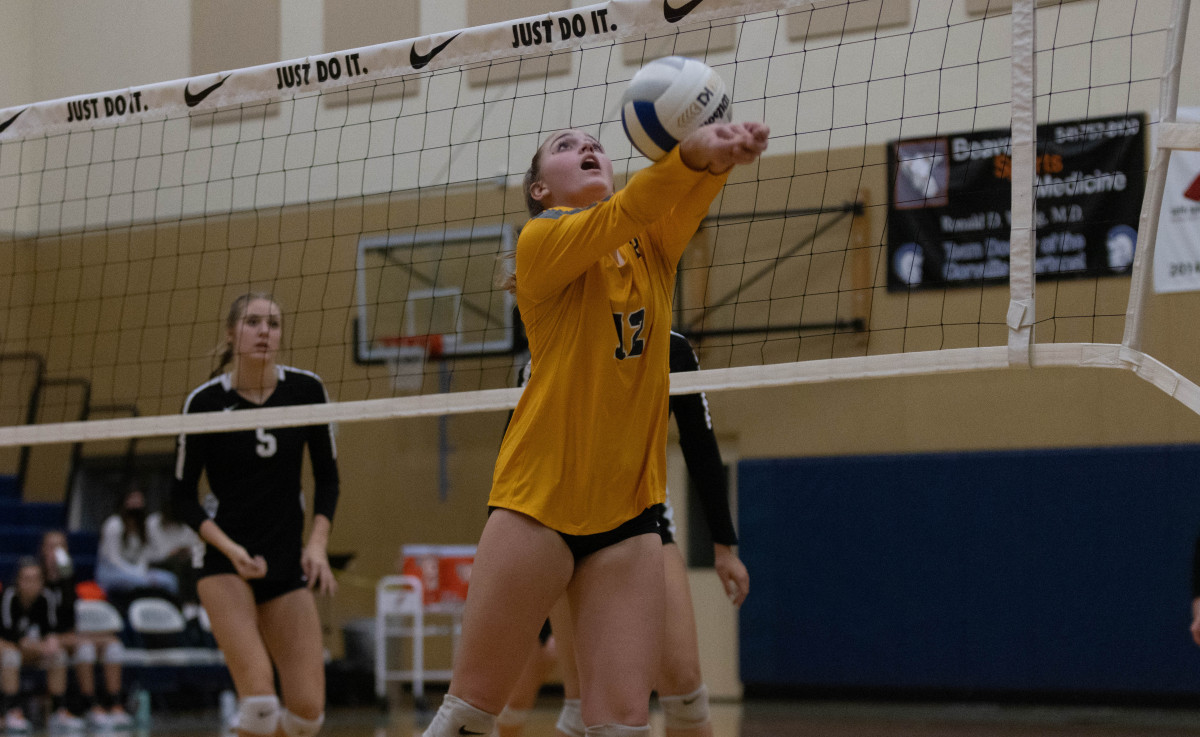 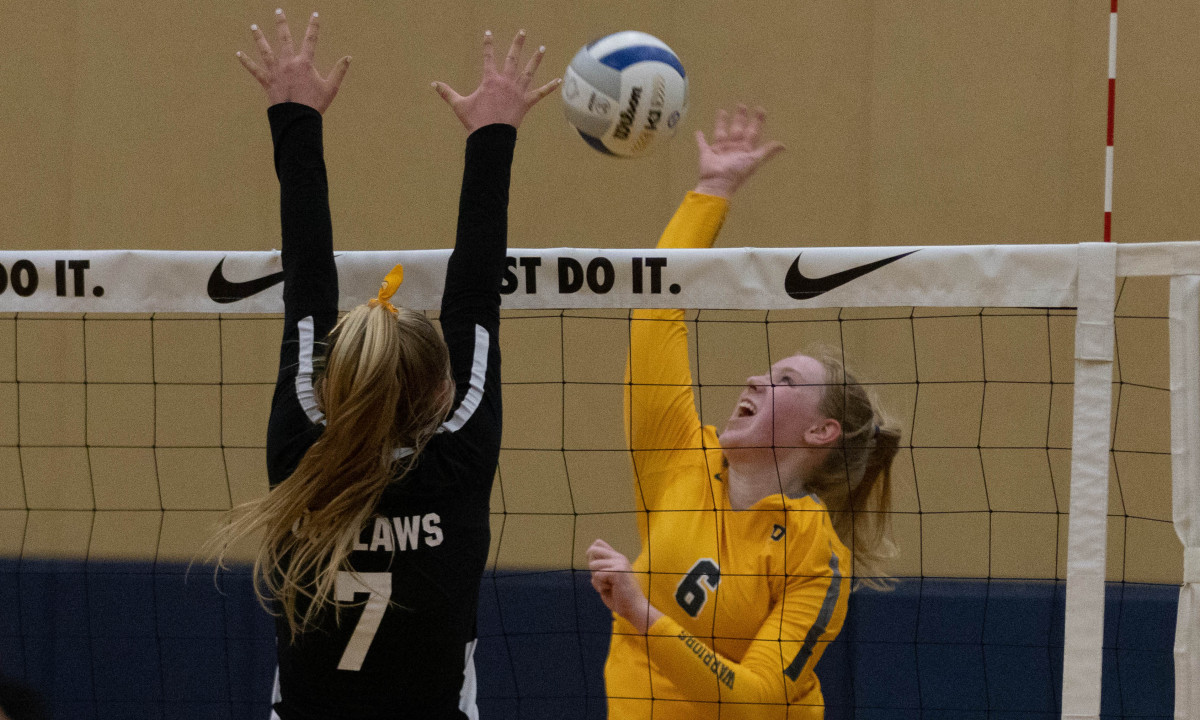 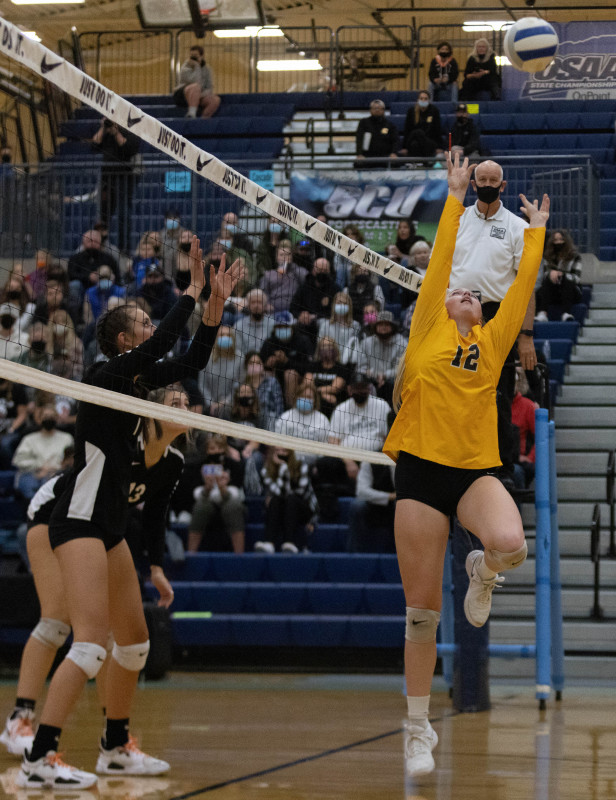 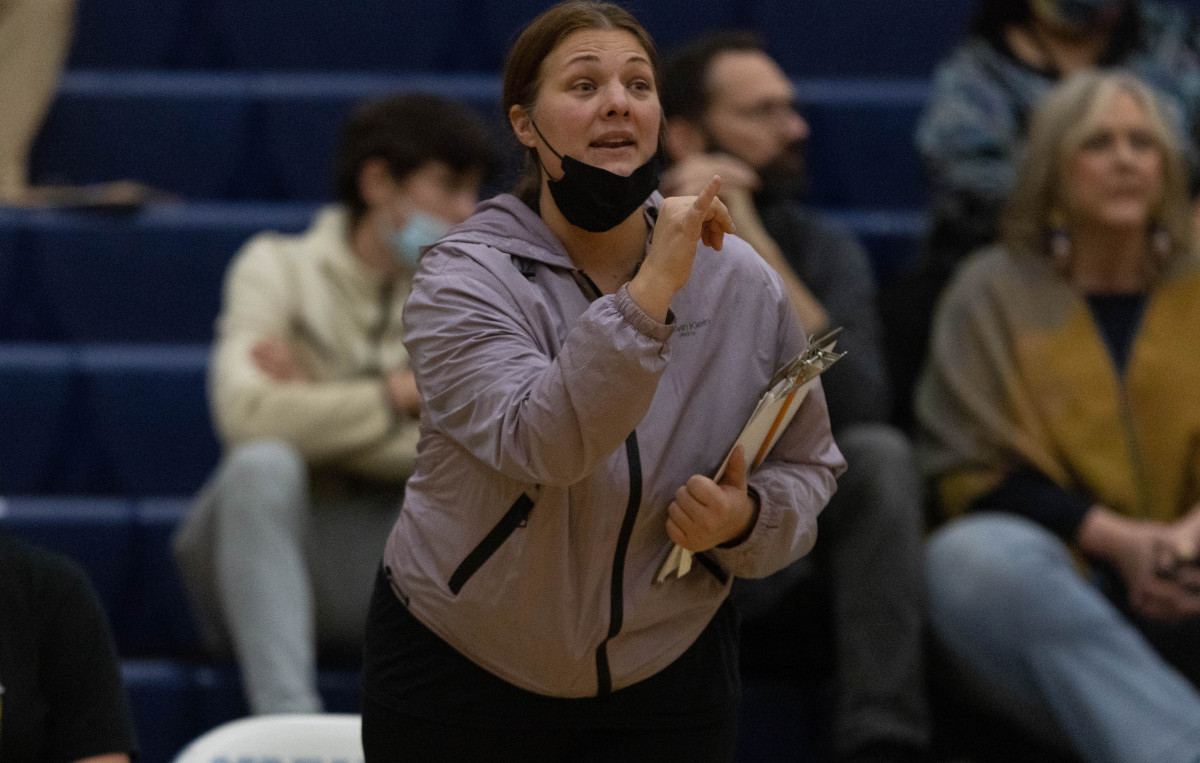 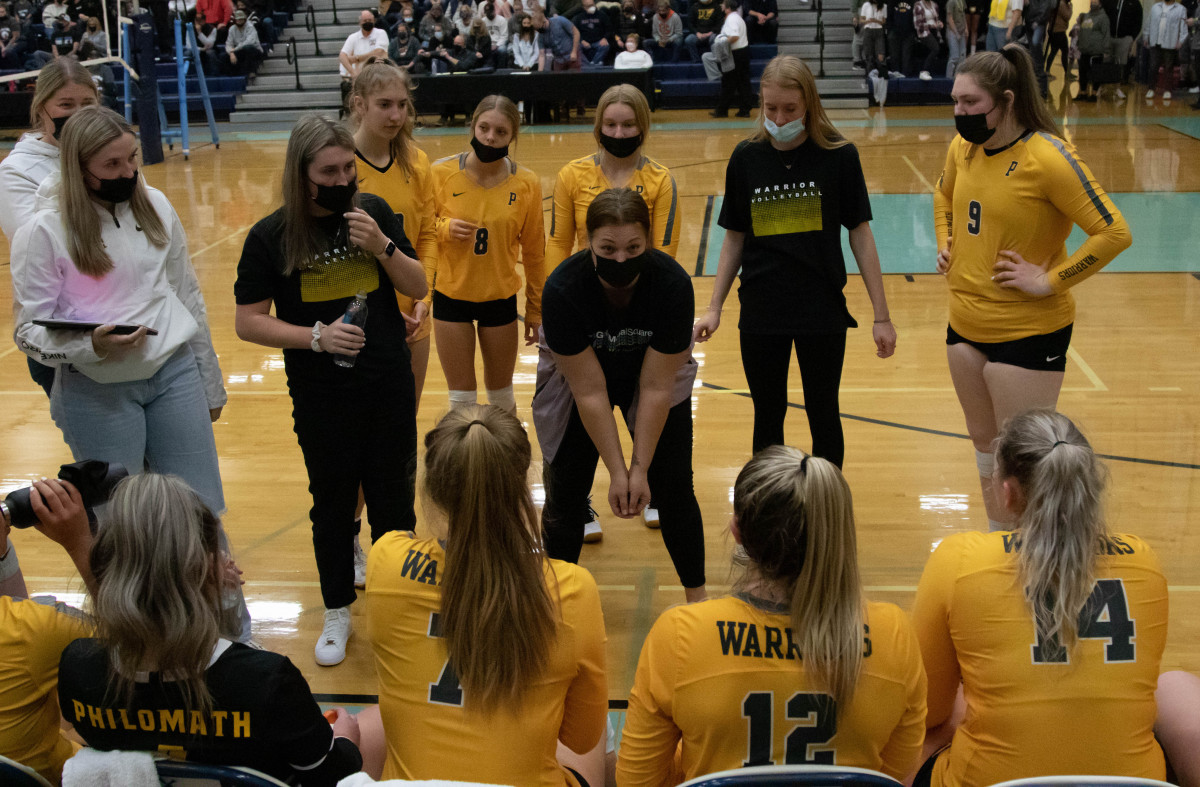 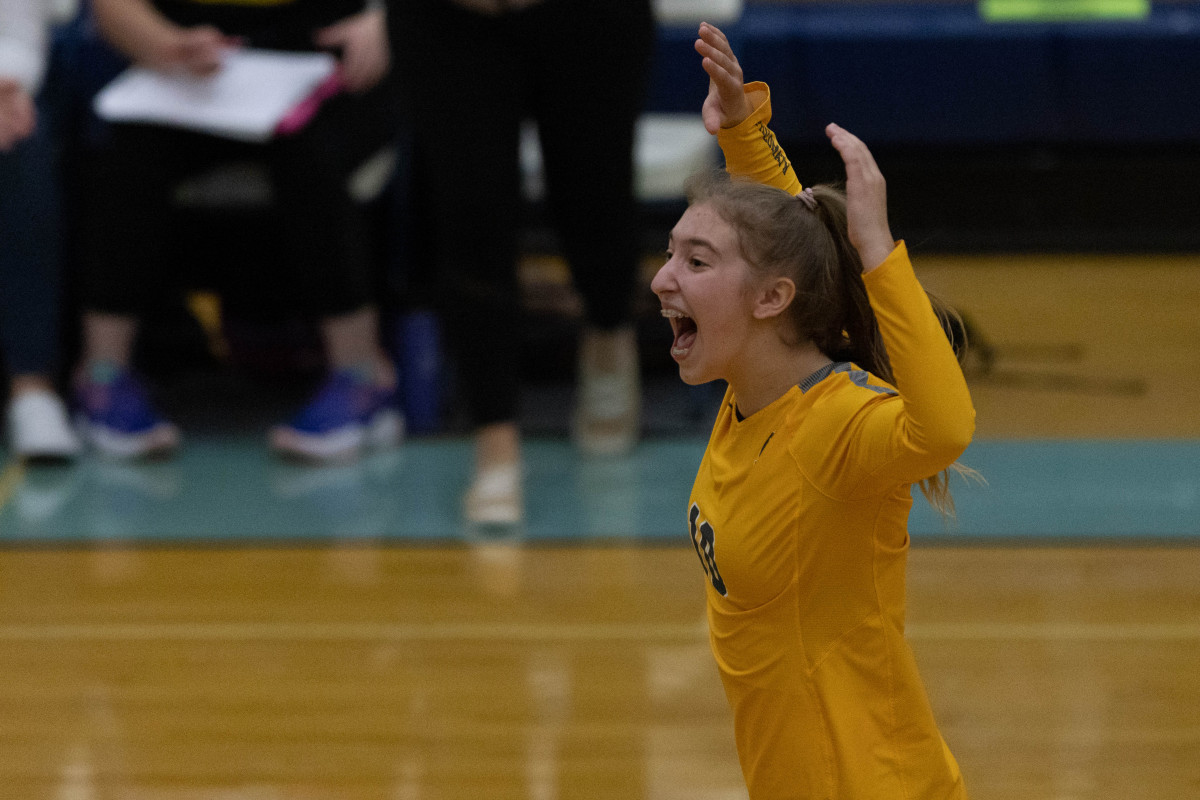 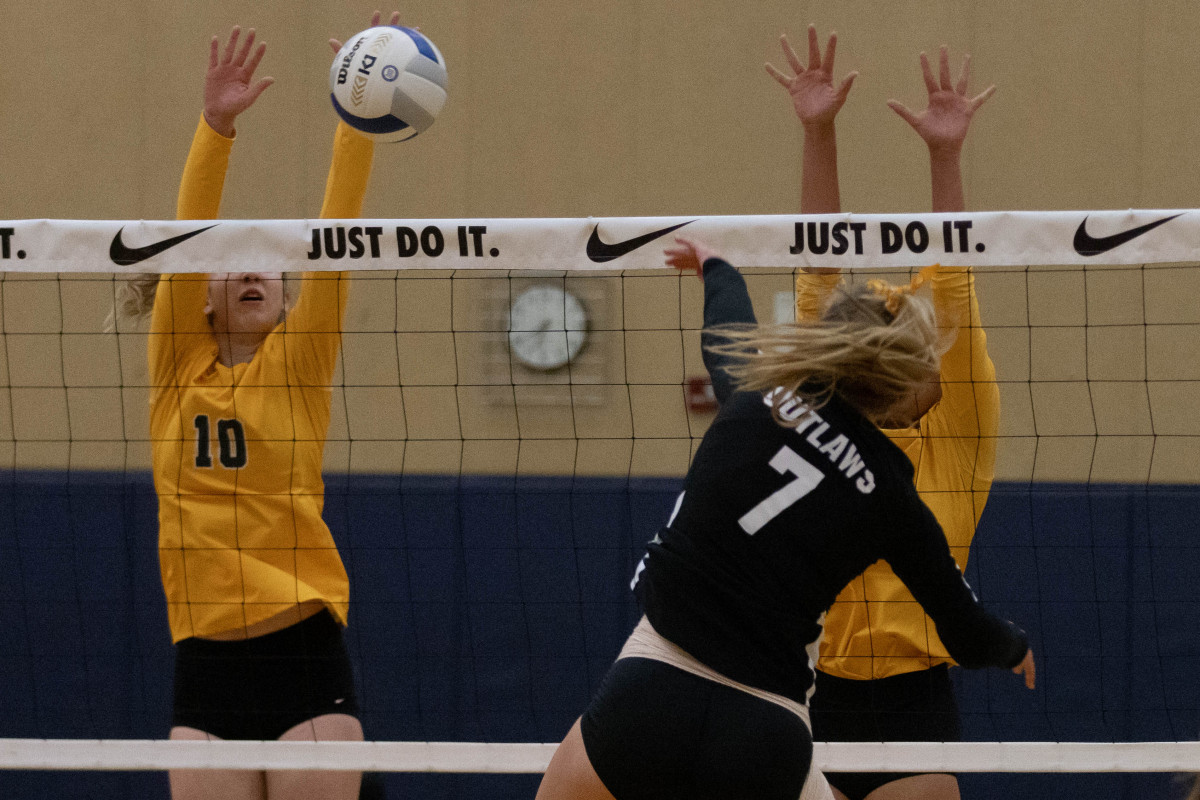 In the fifth set, Sisters jumped out to a 6-1 lead. Of course, Philomath was not going to stay in the hole long and stayed true to its tendencies, tying the match at 7-7 — although most of those points were the result of unforced Outlaw errors.

Later after leading 11-8, Philomath scored three straight to again tie the set. The Warriors had one of its most exciting moments of the match on the 11th point. Roe had an exceptional dig to keep the rally going and Brown hit a hard ball that the Sisters defender couldn’t handle, hitting it into the referee’s stand.

But then Philomath experienced a rough stretch that led to the Sisters win. Sydney Myhre had a kill for the 12th point and back-to-back serve-receive issues put the Outlaws into a match point situation. Breanna White’s kill clinched the victory for Sisters.

Kramer finished with 20 kills while both Barron and Brown had 13. Roe finished with four ace serves. Larson had 42 set assists. On defense, five players had double-digit digs — Barron and Roe each with 19, Kramer with 15, Brown with 13 and Larson with 10. Ahnika Tryon had two solo blocks and Stanley had five block assists.

For the two teams in the third-place match, Philomath and Valley Catholic have not played this season. The last time the two schools met was during the 2019 season in the Sisters Tournament when the Warriors pulled off a 25-18, 23-25, 15-13 victory. Valley Catholic went on to win the state title.

Cascade beat Valley Catholic in the other semifinal in straight sets.