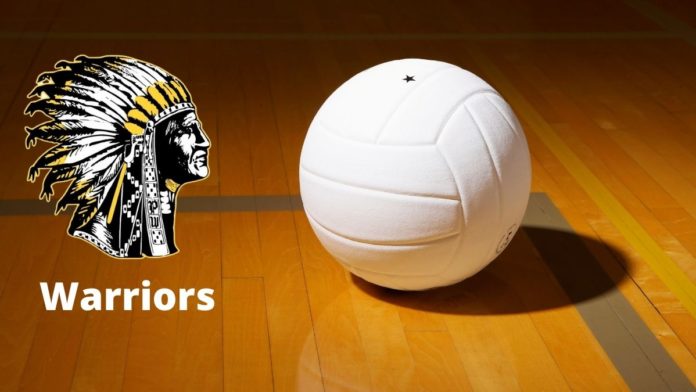 While classmates in football, soccer and cross-country have been playing against other schools over the last couple of weeks, Philomath High’s volleyball players have been forced to remain inactive competitively because of Benton County’s COVID-19 risk level.

Late last week, the moment they had been waiting for finally occurred and the county moved from extreme to high. That meant indoor practices and matches against other teams could finally happen.

Philomath High coach Denee Newton, who is entering her fourth year in charge of the volleyball program, said this past Thursday that the team planned to get into the gym for its first full-team practice on Friday and were hoping to get in another one over the weekend.

Newton said that she’s remained sane through the pandemic, but laughed that she’ll need to revisit her approach to team practices. Up until Friday, the Warriors had been practicing in cohorts, including outside on the tennis courts.

“Oh my gosh, I’m surprised that I’m fine,” Newton said. “I was laughing because I have to go back and remember what I put on this whiteboard every day at practice. I don’t remember how to plan a practice anymore … my muscle memory just deteriorated.”

Philomath will open the season Monday at Stayton, a team that’s already played five matches. In fact, the Eagles will enter the fray against the Warriors riding a four-match winning streak.

“They’re super excited to play and I’m excited about this group,” Newton said. They’re really, really earnest and determined to set some goals and get a lot better really quickly.”

The team will need to do just that with a schedule that has the potential to get a little crazy. After facing Stayton on Monday, Philomath will head to Cascade for a Thursday evening battle. Beyond that, however, Newton’s not 100% sure about dates and opponents but said the program is ready to play several nights per week to get caught up.

Junior Sage Kramer and sophomore Abigail Brown stand out among the group returning to the court for this shortened season. Both were Oregon West Conference honorable mention selections in 2019 — not bad in an extremely competitive 4A league that also includes Sweet Home and Sisters.

“Sage and Abigail are both hitting super hard and they’re really ready,” Newton said. “Maddie Fields — all she wants to do is murder the ball … she does a really good job.”

Kramer and Fields are set up for the outside hitter positions with Brown in an opposite hitter and middle blocker role.

“Those three all seem to be hitting the ball,” Newton said. “They’re getting everything out — all of the pandemic woes are helping them hit a little bit harder right now.”

Juniors Laura Noble and Reagan Larson are penciled in as setters but will have expanded roles.

“We’re probably running a 6-2 so you’ll see the setters, Laura and Reagan, also hitting and they’re going to add some offense for sure on that right side,” Newton said.

Others in the primary varsity group include junior Ashlynn Barron, middle blocker/opposite hitter, and junior Taylor Roe, who has moved into the libero position. Swing players — those who will suit up with the varsity but also compete with the junior varsity — include senior Alex Tipsword, sophomore Kori Galvan and junior Mackenzie Hiner.

Overall, the volleyball program has 23 athletes and as such, Newton will have the JV and JV2 teams also competing. Juleia Dooley will take over coaching duties with the JV squad while London Starley moves into the position of JV2 coach. Charlotte Feige and Kaela Lindsay are assistants.

Asked about how she’s approaching this shortened season, Newton plans to work toward whatever kind of championship tournament the 4A athletic directors plan to arrange while also looking to the future.

“I’m thinking about next year and the year after already, frankly, and what we need to work on the most and how to improve,” she said. “The ADs are talking about a volleyball championship so it sounds like there will be an eight-team tournament. … We’re going to plan for whatever that means and just mostly work on getting a lot better.”

The team has just one senior, so Newton said most conversations will be centered around preparing for next season.

“We have the JV group with probably three freshmen, that would be on varsity if this was a normal fall and I had 12 on my roster,” she said. “We’re going to put a lot of work into the JV group as well because it’s really more of a varsity part 2 in a lot of ways.”

Monday’s match at Stayton — both JV and varsity — will be streamed via the NFHS Network. The Thursday matches at Cascade are also scheduled to be available on NFHS.